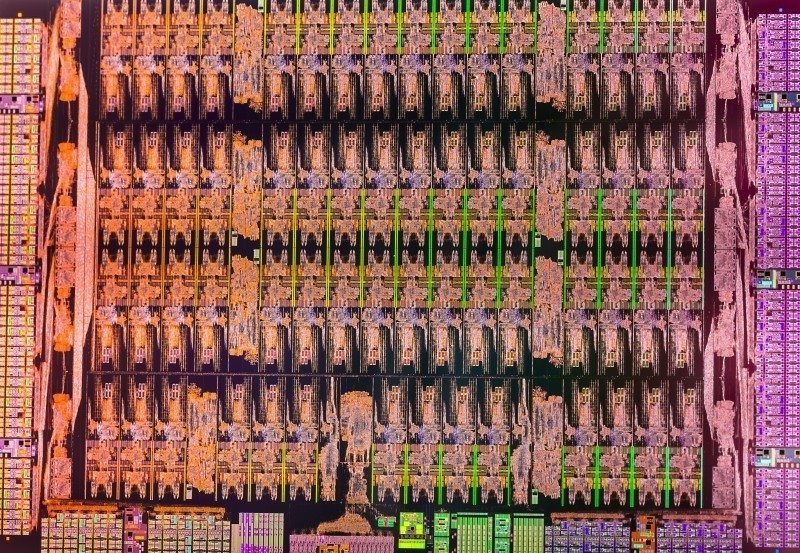 At the Supercomputing Conference ’15, Intel revealed more information about their new 72-core chip, Knight’s Landing (codenamed KNL), as well as showing off the 14nm die. Rumors surrounding the specifications of the Knight’s Landing chip, but it was good to have official confirmation of the details, courtesy of Anandtech.

The most surprising detail of the KNL chip was visible from the wafer that Intel had to showcase at the event. Close examination showed that each individual Knight’s Landing die could be as large as ~683mm^2, while being on a 14nm node, which is huge for a chip. Knight’s Landing will also be available in 2 layouts, a PCIe card, like past Xeon Phi chips that required a separate internal OS, or as a socket form factor, which will act as a regular processor. Further, the socket form factor will pack 36 PCIe lanes, which allow it to handle usage of two Knight’s Corner PCIe co-processor units.

The main cores of Knight’s Landing will be based on modified x86 Silvermont cores, generally used in low-power processors such as Intel Atom and Celeron lines. Both of KNL’s form factors will carry stacked DRAM, a first for its type. The socket form factor, which is not bottlenecked by the PCIe lane will have super low latency connections, making it able to accept additional 2400Mhz DDR4 memory, like a typical processor. The Knight’s Landing chips will also carry an onboard hybrid memory cube (HMC). And while the HMC will not actually be part of or stacked upon the die, instead a fully custom HMC unit will surround the die, acting like an L3 cache and appearing like it is actually part of the die.

Intel also showcased a basic reference motherboard for the KNL socket factor. The board was longer than a typical ATX motherboard but also thinner. Interestingly the motherboard did not come with an Intel Omni-Path connector, which would limit its expandability. This could be rectified with either the addition of additional KNL units or PCIe Omni-Path cards.

If that isn’t all, Intel also published a compiled list of all the disclosures they have made regarding the Knight’s Landing architecture, which for those who want to know the hard figures behind the chip can find here.