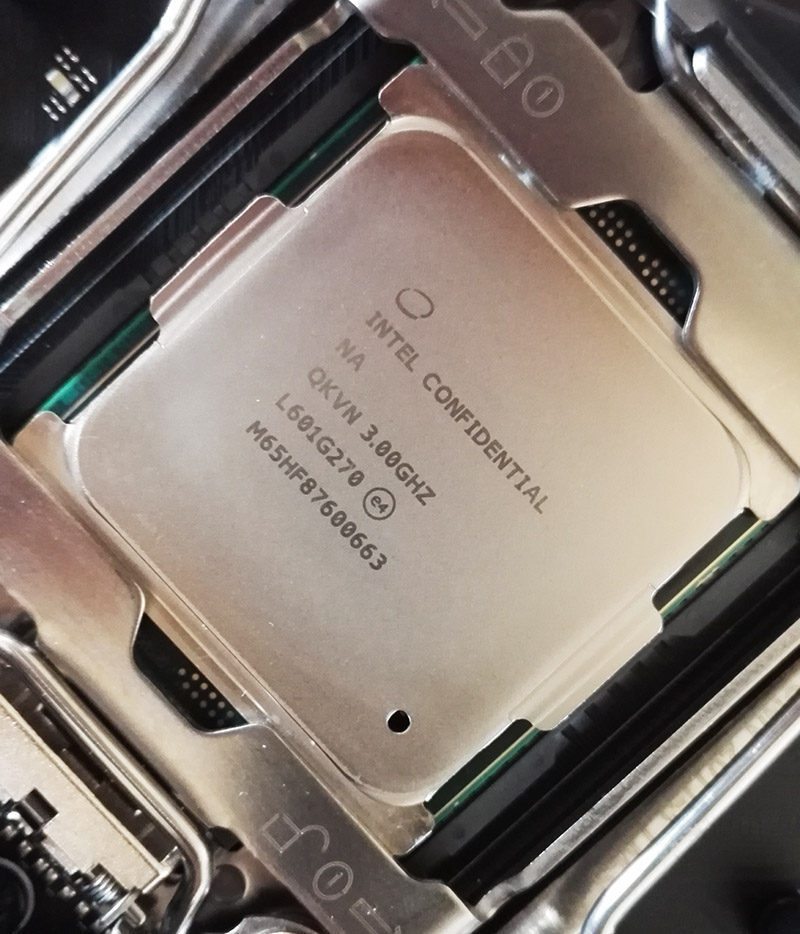 Intel has been dominating the HEDT market for a considerable amount of time as prosumers’ hefty multi-threaded workloads require additional cores which the mainstream platform cannot accommodate. The company’s long-term strategy appears to revolve around the idea that 4-cores, 8-threads is ample for enthusiasts and anyone yearning for 6, 8 or even 10-core processors should move onto the professional 2011-v3 platform. An interesting pattern emerged when the i7-6700K launched in the UK as it hovered around the £320 mark and remained within touching distance of the i7-5820K. This particular chip contains 6-cores and has a good thermal tolerance to achieve superb overclocks although the PCI-E lanes are restricted to 28.

Of course, this is the most affordable Haswell-E CPU Intel has produced and the higher end offerings which utilise 40 PCI-E lanes targets less gaming-orientated scenarios. In particular, the i7-5960X launched at $999.99 and became the company’s first 8-core processor outside of the Xeon family. The entire Haswell-E range was based on a 22nm lithography and officially supported up to 2133MHz of quad-channel DDR4 memory. Intel has since updated the X99 platform in the form of Broadwell-E which includes the i7-6800K, i7-6850K, i7-6900K and i7-6950X. This time, the manufacturing process has changed to 16nm with tri-gate 3D transistors being deployed. Instead of analysing the entire line-up, we’ve decided to focus on Intel’s new flagship and investigate its place in history as the first 10-core processor to grace the desktop.

As you can see below, the i7-6950X features a 3.0GHz base frequency, maximum turbo of 4.0GHz, 25MB of level 3 cache and 10-cores/20-threads setup. Not only that, the processor has a 140W TDP and slots into any 2011-v3 motherboard on the proviso that the BIOS has been updated. This backwards compatibility with existing motherboards is fantastic because they’re much more expensive than their Z170 counterparts. Priced at a whopping £1419.99, the i7-6950X is a serious investment and one that I predict many professionals will struggle to justify. Clearly, the product is niche and a major price increase compared to the i7-5960X. Is the additional 2-cores worth the extra? Let’s find out! 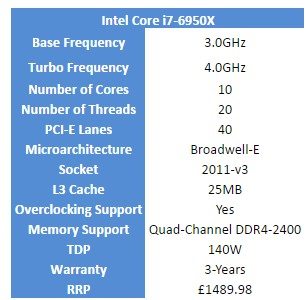 Here we can see the i7-6950X’s die map which outlines the how the 14nm process is compiled. Please note, Broadwell-E isn’t a major architecture shift and revolves around a die shrink with a few added features. Nevertheless, the die is very impressive and Intel doesn’t really need to innovate in this area considering the hard work has already been done. 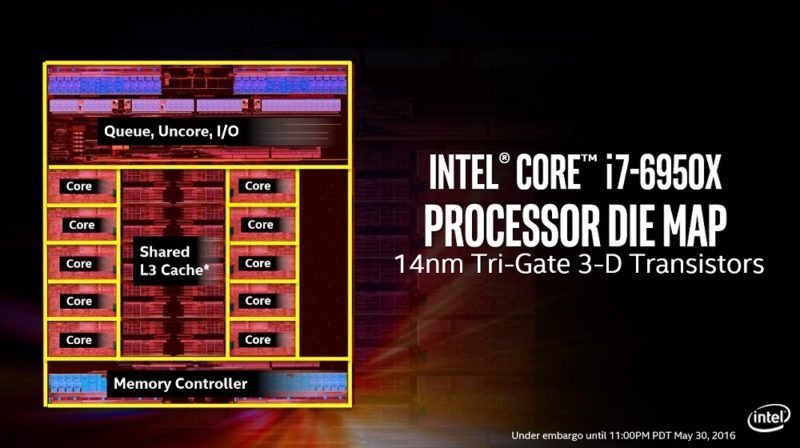 The latest X99 motherboards natively support Thunderbolt 3.0 which provides the end-user with a wealth of possibilities such as daisy chaining multiple high-resolution displays and connecting extremely fast external drives. As shown by the slide below, Thunderbolt 3’s 40Gbps bi-directional bandwidth is eight times faster than USB 3.0. 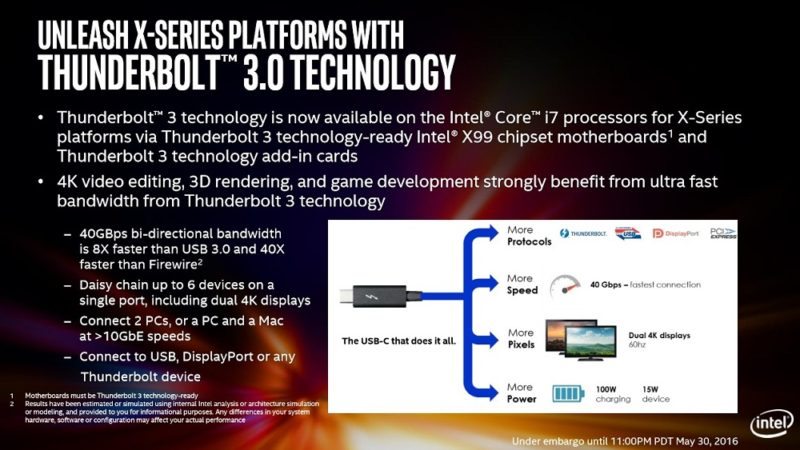 When it comes to overclocking, Intel has incorporated three new features which offer greater flexibility. On older processors, users could only set a specific multiplier for each core. Saying that, per core overclocking isn’t exclusive to Broadwell-E so I’m a little perplexed by this slide. For example, Z170 motherboards support this feature and you can easily tweak the multiplier for each core. The VccU voltage control is useful to attain higher frequencies from the CPU’s ring and designed for extreme overclocking cases with LN2. Additionally, the AVX ratio offset analyses instructions sets which can cause the processor’s TDP and temperatures to skyrocket through extra voltage. Thankfully, the particular AVX instructions which are the root cause of this now run at the optimal frequency and offer a better balance.

Another important element to discuss is the Turbo Boost Max 3.0 Technology. This latest version allows Intel to identify the best performing core at the factory and it’s flagged with a * in the BIOS. Interestingly, this core can run at a much higher frequency than the weaker cores which result in better single-threaded performance. Also, the Turbo Max 3.0 Technology automatically configures the affinity in applications to prioritise the fastest core. Out of all the new additions, this is probably the most impressive and allows the 10-core configuration to fare reasonably well in single-threaded workloads which prefer higher clock speeds. 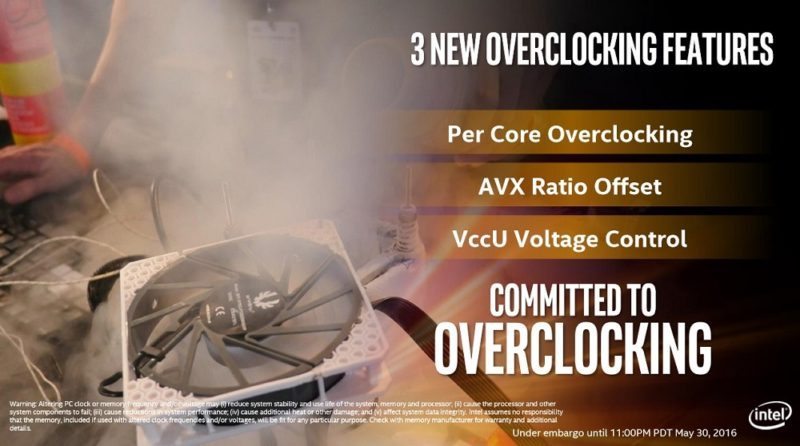 Since the unit received for review purposes is an engineering sample kindly provided by ASUS, there’s no retail packaging or accessories. Even if you purchase the processor from an official outlet, don’t expect to receive a bundled heatsink as per usual with enthusiast Intel products. I don’t have any major issues with this considering the Intel stock heatsink is extremely basic and if you have the funds to afford a processor just under £1500, selecting an aftermarket cooler isn’t going to break the bank.

The i7-6950X has a different IHS design compared to the i7-5960X and includes more angular edges. Apart from that, the appearance is fairly similar and you’d expect that given the backwards compatibility with existing 2011-v3 socket motherboards. 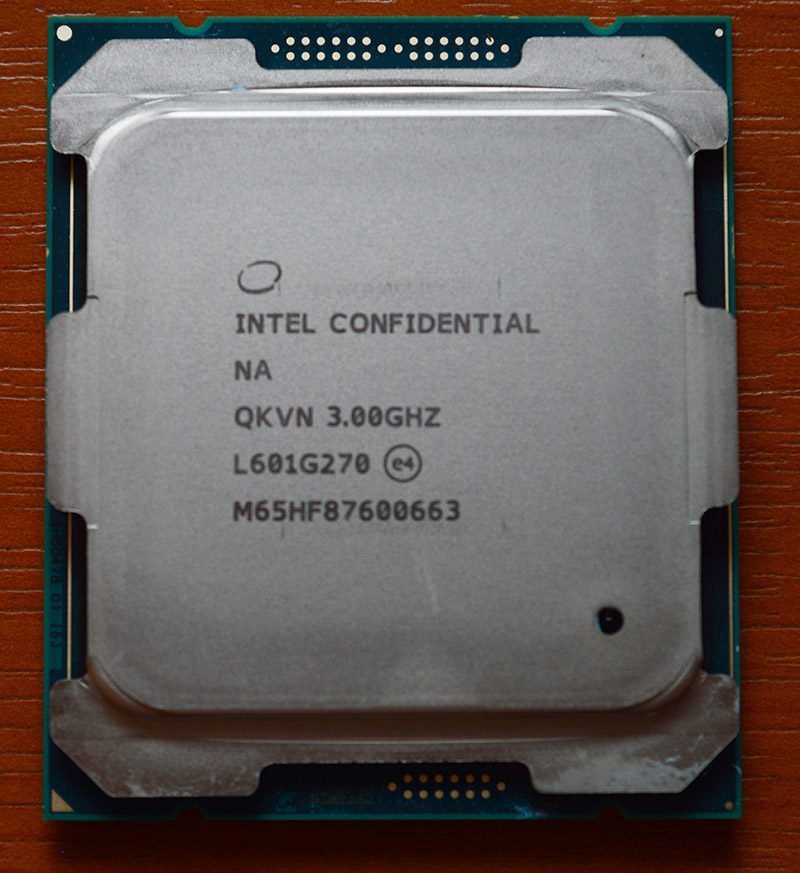 Intel’s new flagship is much thinner than its predecessor measuring in at 1.12mm. To put this in perspective, the i7-5960X is approximately 1.86mm thick. The CPU’s contact points remain largely unchanged but there is an increase in the number of SMDs. Unfortunately, during the time of review, I experienced a few teething issues with the i7-5960X which meant that had to take priority instead of some comparison photos. 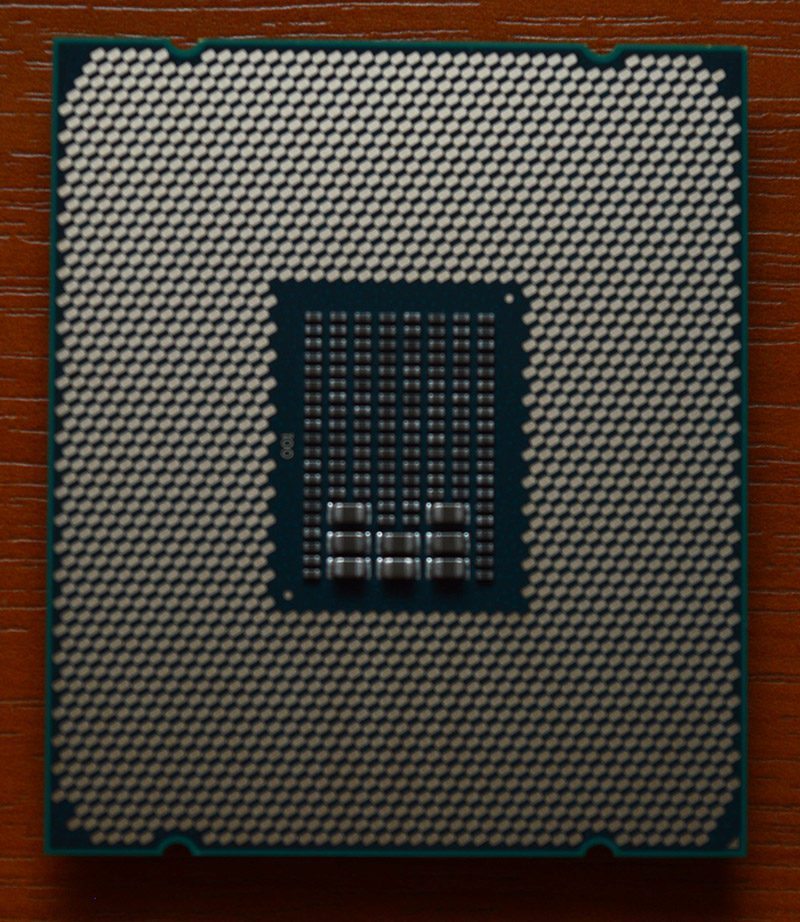