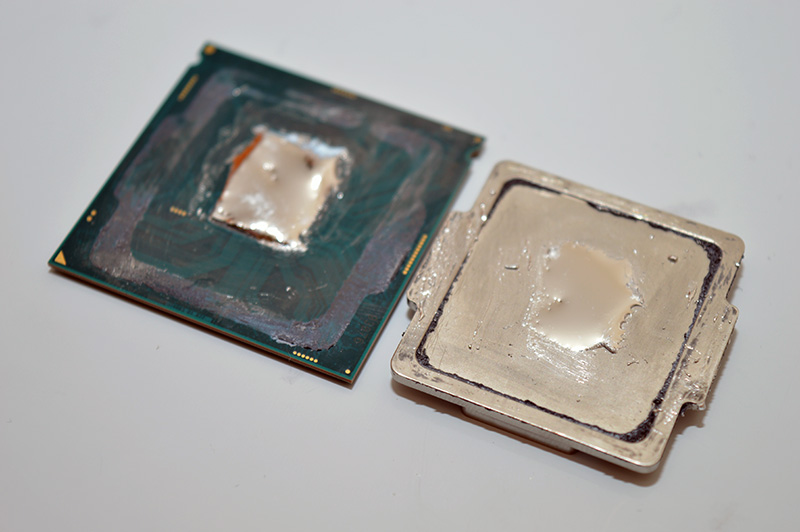 Intel has been utilising poor quality thermal interface material since the Ivy Bridge microarchitecture which increases the thermal values and restricts the overclocking headroom. Modern CPUs are engineered with the silicon die being cooled through a pre-applied integrated heatsink and conductive thermal layer. This method is used because the die emits a large amount of heat over a small surface area. Furthermore, the IHS is constructed from copper which has excellent thermal conductivity qualities. Unlike many CPUs from a bygone era which relied on a soldered IHS, the modern equivalent is secured with an adhesive layer. This withstands thermal expansion and maintains a tight seal. Soldering would provide a better thermal conductivity but it’s expensive and challenging to do on a mass scale.

Of course, Kaby Lake is being prepared for the official release and a rather alarming report concluded that the i7-7700K’s temperature plummeted by an average of 26C after delidding. This is a gigantic thermal change suggests Intel is relying on a sub-par TIM. In lieu of these striking benchmarks, I decided to test a retail sample and compare the temperature values to assess if delidding is worthwhile.

DISCLAIMER: Delidding isn’t without risks and will invalidate the manufacturer’s warranty. We cannot be held responsible if you damage your CPU using the recommended guidelines in this article. This is an assessment of the process and we try to provide help in good faith to outline the best method for deliddling. However, even the best method has risk involved and you must be prepared for the worst possible scenario just in case.