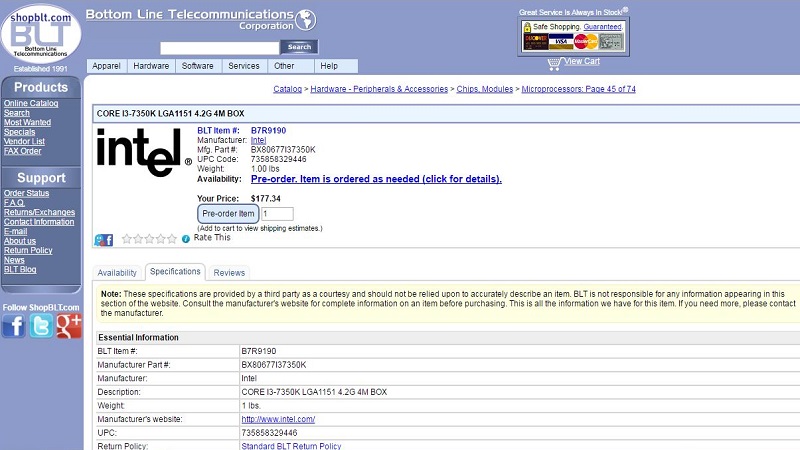 Since moving to the unified bus architecture, Intel CPUs have become hard to overclock. In order to overclock these CPUs to a significant level, unlocked multipliers are necessary. Unfortunately, that feature has been largely limited to the more expensive i5 and i7 series and the one-off Pentium Anniversary Edition. In a surprising new twist, it appears that Kaby Lake feature the first ever unlocked i3 CPU.

According to the online listing, Kaby Lake will feature the  i3-7350K. The K moniker has been limited to unlocked processors which means that the 7350K should be unlocked as well. The chip features 2 cores with Hyper-Threading for a total of 4 threads like most i3s. In a first, it will be clocked at 4.0 Ghz base and 4.2 Ghz boost, comparable to the rest of the recent K series chips. This will make it the fastest clocked i3 ever and one of the few to feature a boost clock as well.

At the same time, i3’s and even i5’s are being sidelined in the latest games. It has become standard for games to now require at least 4 cores and some even need the eight threads offered only by the i7s. Another new development is DX12 and Vulkan which will allow better utilization of multicore CPUs and reduce reliance on single threaded performance.

The cynic in me feels that Intel know this full well which is why we are finally seeing an unlocked i3. With the state of gaming as it is right now, the unlocked i3 is unlikely to steal any marketshare from the unlocked i5. At the same time, it would provide some competition against AMD’s Zen which will likely feature unlocked dual cores with 4 threads. It will be interesting to see how this will all play out next year.