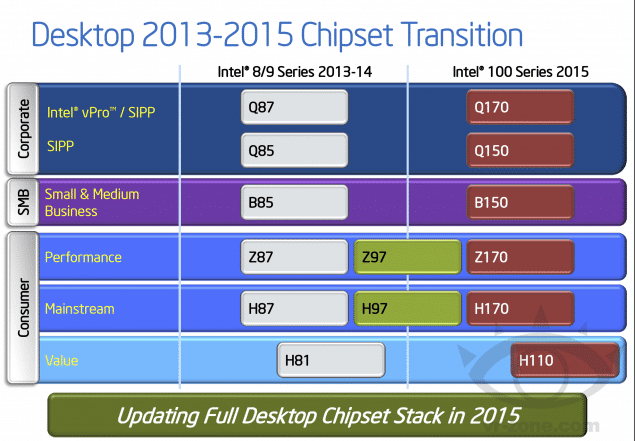 Intel’s Broadwell CPUs will continue the shelf-life of Intel’s Z97 and H97 platforms as Intel migrates from the current Haswell CPU architecture next year. Broadwell will arrive on the Intel performance and Mainstream platforms next year, that’s on the Z97 and H97 chipsets and this is expected to occur in Q2 of 2015. However, we won’t just be seeing Broadwell in Q2 of 2015 because according to the latest leaked Intel Roadmap Intel will also offer Skylake shortly after, something we heard about a few weeks back. Skylake will arrive on all Intel platform segments shortly after Broadwell and will take Intel’s chipset family into the new “100” series. Unlike Broadwell and the 9 series which are only offered in the consumer performance and mainstream segments, Skylake and the 100 series will be offered across the entire Intel range of chipsets. 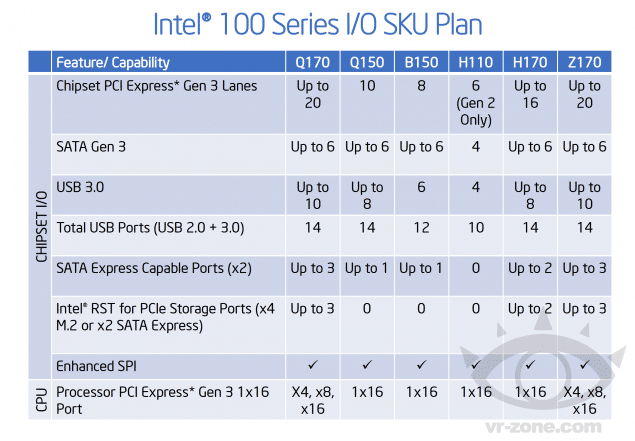 The specifications of Intel’s upcoming chipsets can be seen above. As we see they are not too different to the 8 and 9 series boards; Z87 and Z97 also offer 6 SATA III and 20 PCIe lanes for example. Intel has increased the USB 3.0 count and also the SATA Express and M.2 capabilities of the 100 series. It is important to remember that 100 series motherboards and Skylake CPUs will not be compatible with anything from the 8/9 series or Haswell/Broadwell. Skylake, which are Intel’s sixth generation Core Series CPUs, will utilise a new LGA 1151 socket and they will also have the ability to run DDR3 or DDR4 memory depending on the configuration. Expect exciting things in 2015 from Intel if these rumours are anything to go by!