There are ordinary portable drives and then there are those who simply don’t follow the norm. Today I’m taking a look at the iStorage diskAshur2 with a 2TB capacity (Link). That is definitely something that can’t be called the norm. The diskAshur2 is a portable hard disk drive coupled with some of the most advanced security features possible in such a product.

diskAshur2 is an easy-to-use and secure, PIN authenticated, and portable USB 3.1 hard drive. It utilises real-time AES-XTS 256-bit hardware encryption and features a physical keypad for 7-15 digit PIN codes. With 20 possibilities for each digit, we get around 332-sextillion (15^20) PIN code options. That’s not something easily breakable, especially with the built-in brute force protection.

The diskAshur2 is both platform and device independent. It will work across all operating systems, including all versions of MS Windows, macOS, Linux, Android, Chrome, Thin Clients, Zero Clients and embedded systems. Said simply: If you have an available USB port, diskAshur2 will work.

One of the unique and underlying security features of the GDPR compliant diskAshur2 is the dedicated hardware-based secure microprocessor (Common Criteria EAL4+ ready). The microprocessor employs built-in physical protection mechanisms designed to defend against external tamper and bypass attacks. The diskAshur2 reacts to an automated attack by entering the deadlock frozen state which effectively renders this type of attacks useless. As iStorage put it themselves, “Without the PIN there’s no way in!” 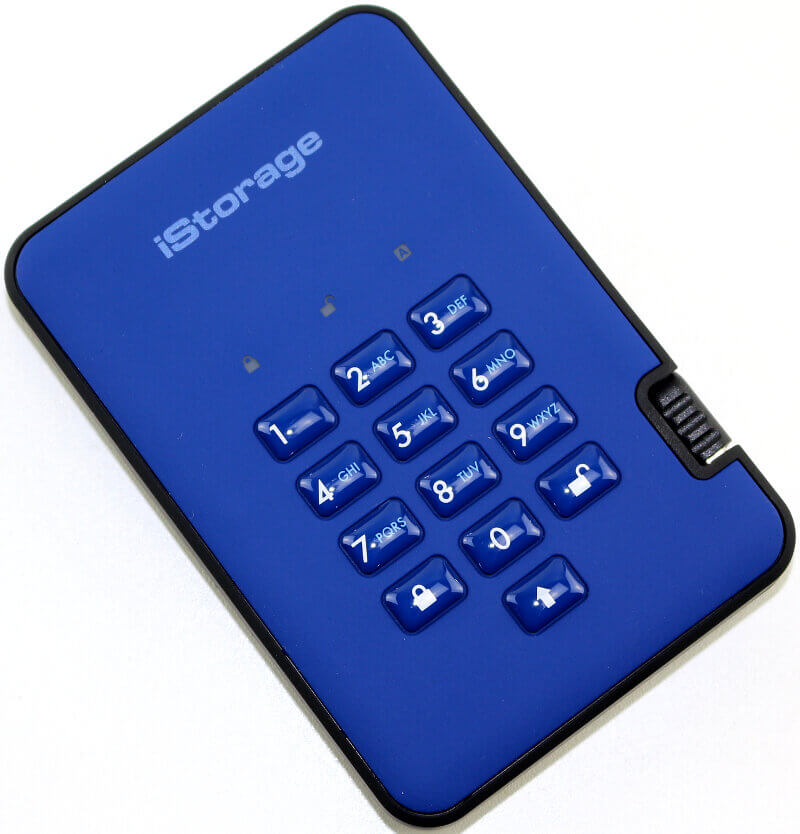 The drive features USB 3.1 Gen.1 connectivity. As we know, Gen.1 is only a new name for USB 3.0, but that’s not an issue for the diskAshur2. A mechanical drive doesn’t come close to the performance limits which would make a Gen.2 connection a pure waste. The USB cable itself is directly integrated and not very long. This is great for portable usage and top-panel USB ports. However, it can be a little short when used in towers or with front-facing USB ports.

Inside the diskAshur2 is a 2.5-inch HDD with 5400 RPM and an 8MB buffer. The drive is rated up to 148 MB/s and 140 MB/s sequential read and write performance. Thanks to the hardware-based encryption, there’s no performance impact from this feature, and that’s a giant plus.

The use of a 2.5-inch form factor drive also allows the diskAshur2 to be a bus-powered device. These type of drives require less power and it’s possible to run them from a host port as low as USB 2.0

I got the 2TB model in for a review today, but that’s not the only option for the diskAshur2. There are smaller versions with 500GB and 1TB capacity as well as larger versions with 3TB, 4TB, and 5TB capacity. With such a list of options, there should be one for every kind of needs.

Capacity isn’t the only choice you have to make, there’s also the question of colour. The drive comes in four different colour options: Phantom Black, Ocean Blue, Fiery Red, and Racing Green.

iStorage gave be the choice of colour for my sample, and that’s never an easy choice. However, eTeknix colour is blue which made me chose the Ocean Blue version. It looks stunning and it feels great. The surface is soft to touch, yet not the type that grabs any sort of dirt and doesn’t let go again.

Security is also a Physical Attribute

Encryption and data protection is great, but it helps your data little if the hardware gets damaged. After all, the drive is tamper proof, preventing traditional recovery methods. The diskAshur2 is also IP56-rated which makes it water and dust resistant. IP56 isn’t the best rating in this category, but it isn’t bad at all either.

The 5 is for the dust protection and it means that it offers a complete protection against contact with live or moving parts inside the enclosure. Protection against harmful deposits of dust. The ingress of dust is not totally prevented, but cannot enter in an amount sufficient to interfere with satisfactory operation of the device.

The 6 is the liquid protection. The drive is protected from water from heavy seas or water projected from jets. Again, it might not be 100% tight, but it shall not enter the machine in any harmful quantity. 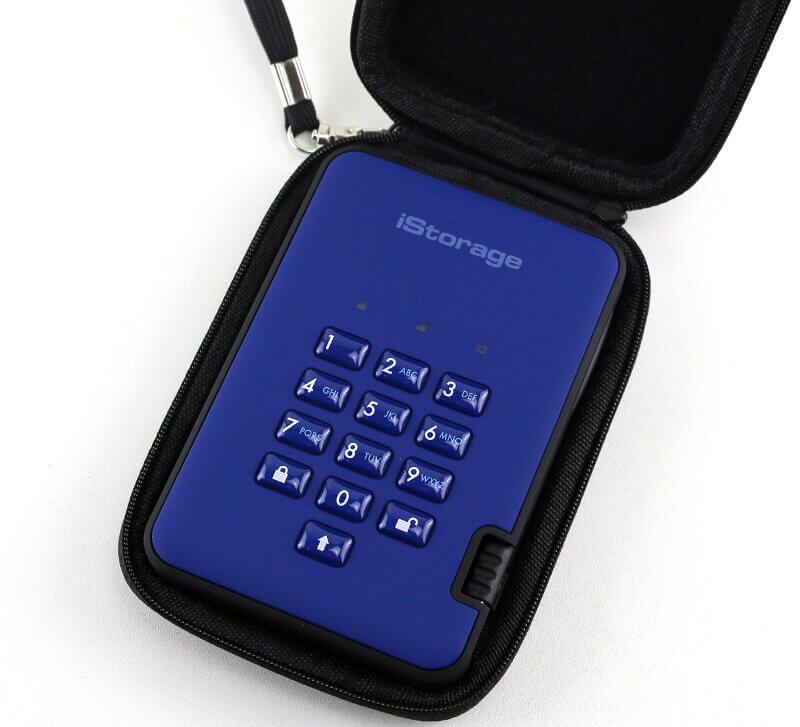 To keep the drive itself safe during transport, iStorage included a carriying case. Even that point is covered, making sure that your valuable files stay protected. 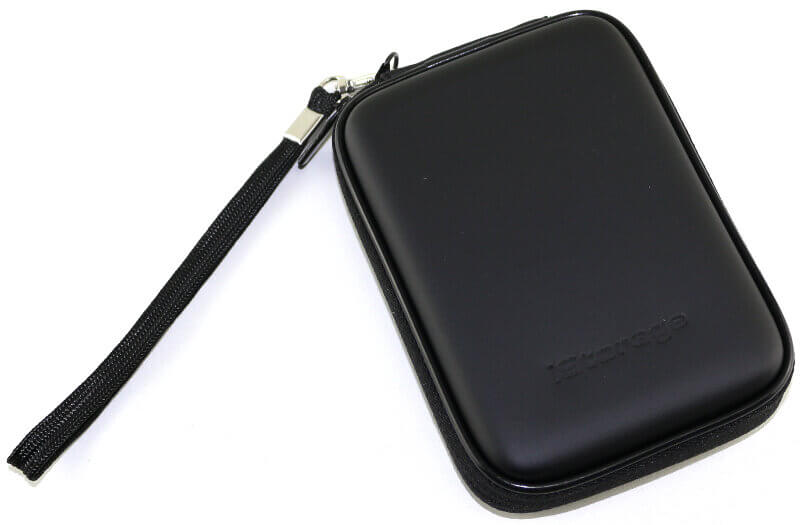 iStorage has a product video available for the dishAshur 2017 range. It shows both a general use of the drive as well as listing all the available features and options.

The package-front doesn’t just show the drive, it also lists the drive’s main features right in the middle. After all, that’s the selling point of the dishAshur2 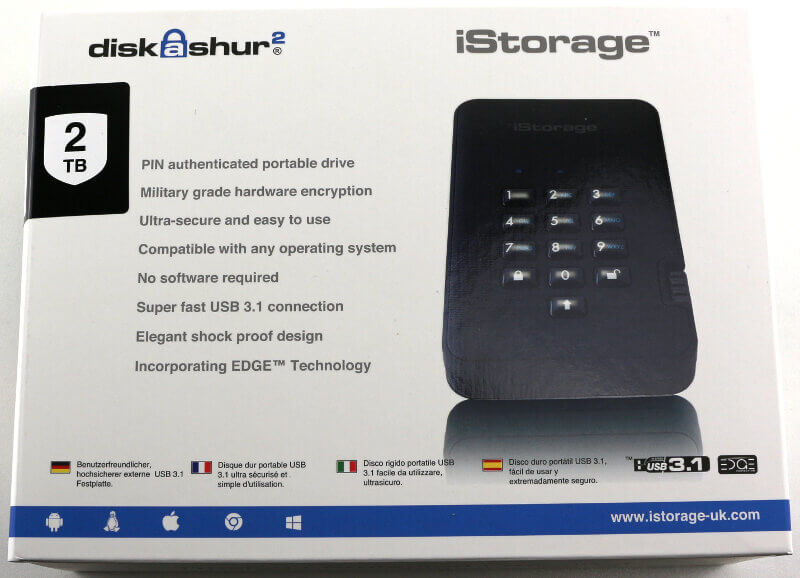 The rear side has more information on several languages 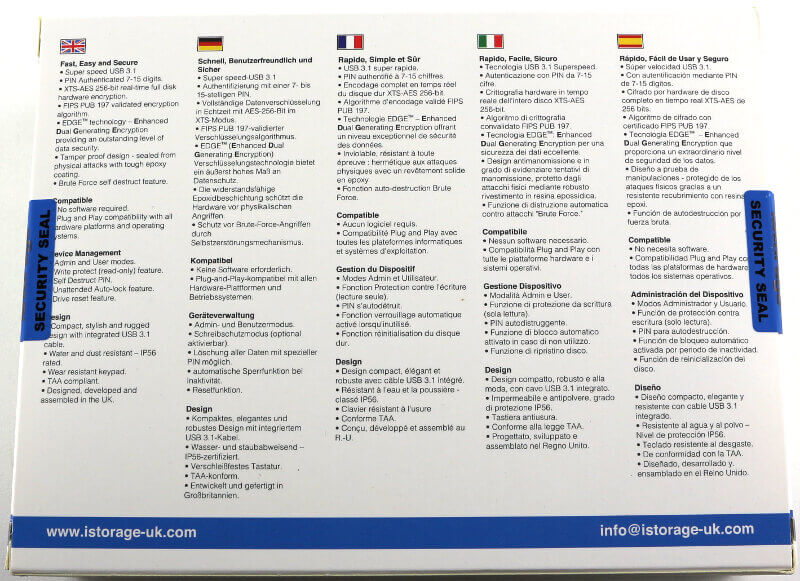 The sides will show which colour and capacity of the drive is included on one side while the other has a list of what’s in the box and where you can use it. 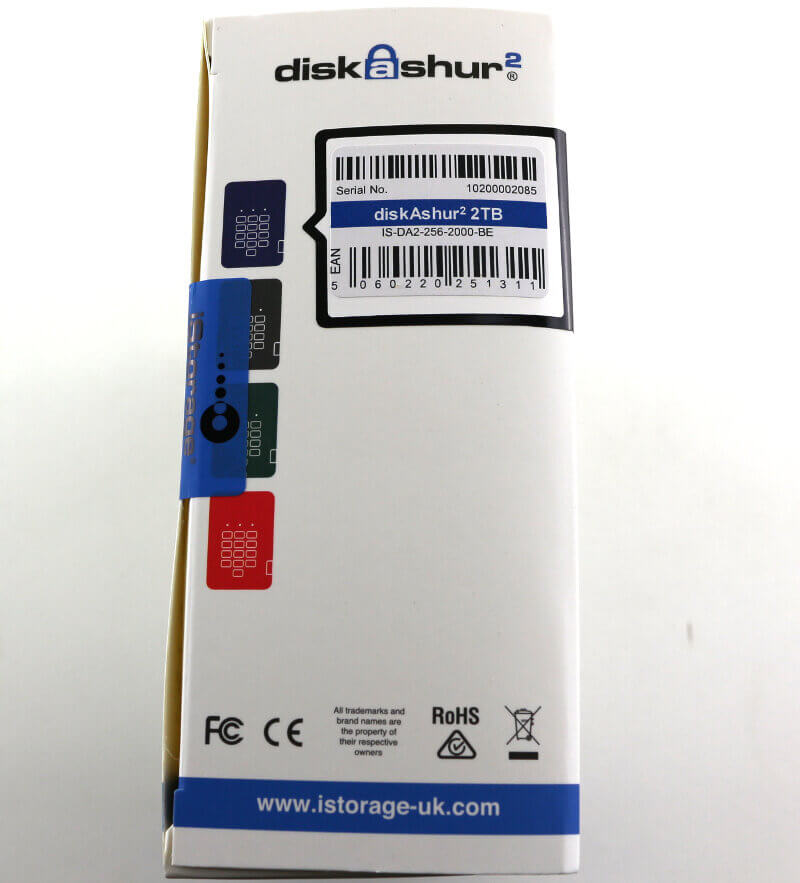 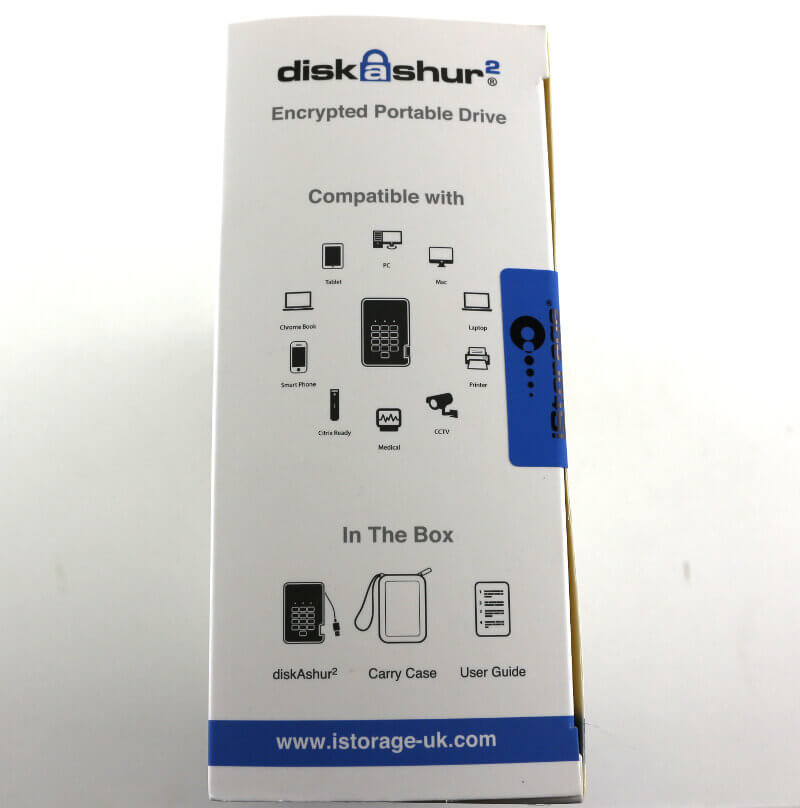 Inside is the drive itself and its carry case, but there are three notes too. There’s one for Nero BackItUp and one for iStorage’s DriveSecurity and both come with activation serial included. There’s also a general quick-start guide for the drive. 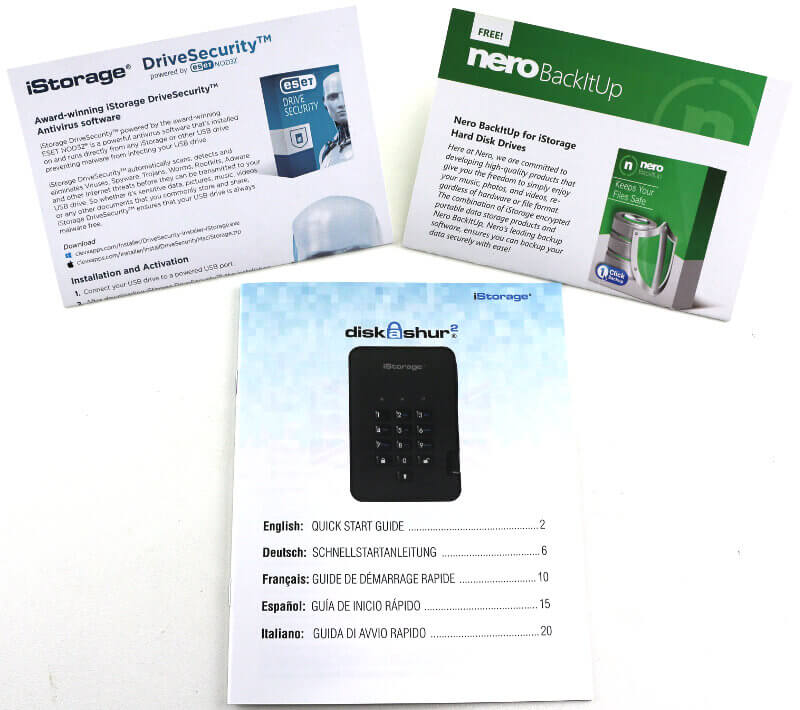