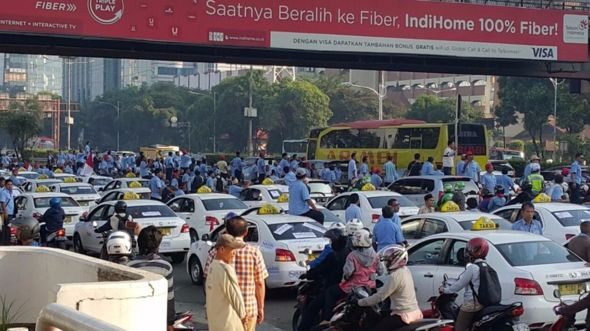 Recent years have seen the rise of apps that sometimes disturb common practices, things that have been going on for many years already. One of the things disturbed has been Taxi’s with many apps offering similar services, often for cheaper fares. Taxi Drivers in Jakarta have had enough and are now protesting against Uber and similar apps.

Taxi drivers in Jakarta are saying that apps such as Uber and grab have impacted their business, resulting in reduced salaries. The impact they say is because unlike Taxi companies, the apps are not affected by the costs and regulations that Taxi companies have to pay.

No matter what their opinions on the matter, attacking other taxi drivers does nothing but harms their reputation, arguments and relationships with fellow workers as they fight for the “good of the group”. The protesters have taken to blocking roads outside many government buildings, including the ministry of communication and parliament, resulting in heavy delays in the capital.

With apps like Uber offering features that taxi’s simply can’t, such as the new Family ride service, are taxi’s able to keep up with the apps or are they sticking to a model which technology has made dated? Do you use Uber or are you a Taxi person? Which is better in your opinion and why use one when the other is available? Leave us your thoughts in the comments below