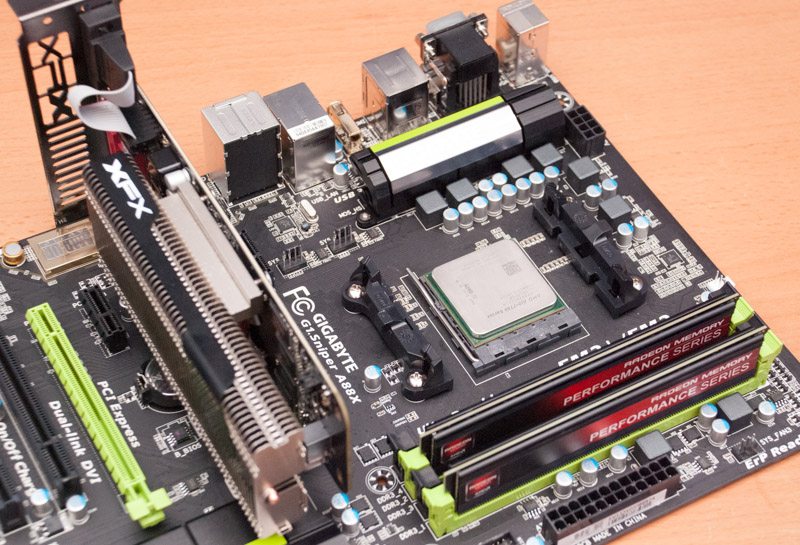 Kaveri represents another significant step forward for integrated graphics performance but realistically it still isn’t even on the same playing field as true discrete graphics solutions which aren’t as limited by memory bandwidth or physical space. However, AMD has always had a solution for making its APU graphics performance more competitive and this solution is known as “Hybrid CrossFire”. However, AMD has recently changed the nomenclature and Hybrid CrossFire is now dubbed “Dual Graphics” so this will be used in this article interchangeably with Hybrid CrossFire.

The term “hybrid” in Hybrid Crossfire is coined because it is a hybrid amalgamation of “discrete-class” integrated graphics on the APU with a discrete graphics card. The logic of CrossFire is still retained in Hybrid CrossFire – you should pair two similar graphics processors to scale extra performance through synchronisation and joint GPU processing. In the case of Hybrid CrossFire you aren’t dealing with only graphics cards like you would be with normal CrossFire, but instead GPUs so it can be problematic, though the objective is still to pair similar parts. AMD does set out some official recommendations for which R7 series GPUs you should pair off with each Kaveri APU – we will detail those recommendations on the next page. A final thing to briefly mention is frame pacing. AMD have released a driver fix for frame pacing which effectively fixes the problem of delayed “runt” frames. In our case we have enabled the frame pacing driver but we lack the equipment to show you how effective this frame pacing driver is. However, we can point you to PCPer who have investigated the driver fix to show that it does solve the problem and offers identical performance to what you would get with the frame pacing setting turned off.

In this article we will be taking a look at what AMD’s Dual Graphics can offer in terms of a performance upgrade for Kaveri APUs, so without any further ado let’s take a look!