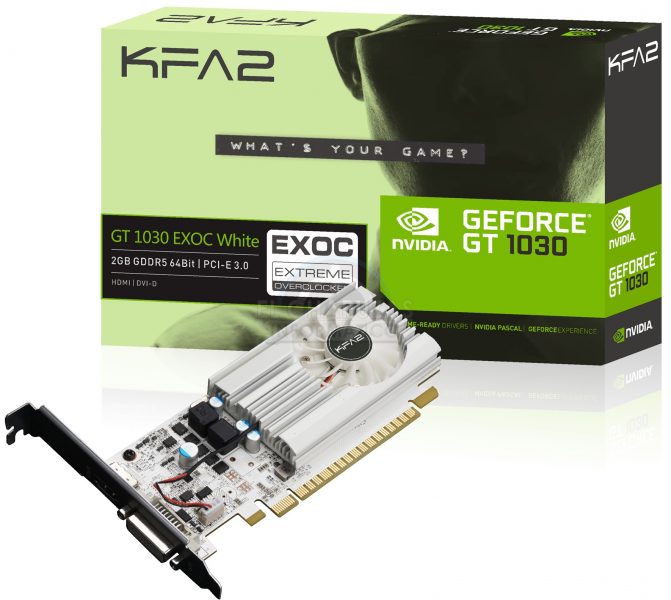 The folks over at Spanish tech website El Chapuzas Informatico has the exclusive scoop on NVIDIA’s latest entry level GT 1030 graphics card, specifically with a KFA2 GeForce GT 1030 EXOC White sample. Unlike what was earlier reported about the GT 1030, it appears that it is actually running with less CUDA cores than expected at only 384 instead of 512. The GP108-300 silicon is also built on a 16nm process and not 14nm although it does have a boost frequency of 1506MHz and a starting base frequency of 1252MHz. The GT 1030’s memory is also running on a 64-bit memory interface and not 128-bit as previously thought. The KFA2 GeForce GT 1030 EXOC White specifically has 2GB of GDDR5 running at 6000MHz effective memory rate.

The low TDP makes the card ideal for multimedia and HTPC use for SFF systems. Specifically, the KFA2 GT 1030 EXOC White has a half-height design with a DVI port and an HDMI 2.0b port so it can fit in many slim-style systems as an aftermarket upgrade. Although the AMD Radeon RX 550 has already been released, the GeForce GT 1030 will not be available until May 1st, 2017.