Earlier in the year we saw Kingston come out with another revision of their popular HyperX line of SSDs. Sadly we wasn’t able to get our hands on one of these new drives at the time, however even though the drive has been on the market for a few months, I’ve managed to get a sample in for review so its time to see how this drive stands in the SSD pecking order. The HyperX 3K, as the name suggests, is part of the HyperX family of products, but over the original HyperX SSD which comes with a blue trim (and which we use in all of our test benches) there are not that many differences in terms of specification. The changes that have been made however, make a huge impact on not only the drives performance, but also its position in the market as far as pricing goes.

When we look at SSDs on the whole, the NAND used has a huge impact on the lifespan of the drive in regards to complete write and erase operations and consequently the price. Early drives to appear on the market typically ran on 50nm silicon and whilst this was great in terms of the total number of write / erase cycles that could be made over all of the NAND, the prices were not favourable to the mainstream market. Like all advances in technology though, silicon has been getting smaller and today we typically see 25nm NAND being used with a life span of 3-5000 cycles achievable. The first generation of HyperX drives used Intel’s 25nm NAND that was slightly more expensive, meaning that it was rated a for a longer lifespan and with the market moving on fairly rapidly, the first generation HyperX drives have quickly been superseded by other vendors. Like the full fat HyperX drives, the first HyperX 3K drives came out with Intel flash on-board but in the same way that Kingston updated their lineup to offer a cheaper alternative, the HyperX 3K lineup has been given a refresh and we now see Toshiba 19nm NAND being used instead of Intel’s 25nm offering.

It takes no expert to guess that the 3K in the newer revisions name refers to the number of write / erase cycles that this drive is built for. With cost in mind, Kingston have chosen to use the cheaper NAND, which carries the lower rated cycles, but as a result they have been able to drop the overall price of the drives whilst keeping the performance up. Smart thinking on Kingston’s part. SandForce’s SF-2281 controller does remain an integral part of the HyperX specification with little more than a newer revision of the popular controller being used.

When we look at the overall package that is available for the money, Kingston’s HyperX drives are almost certainly one of the best dressed. In the well padded box we find [alongside the drive] a 3.5″ drive bay adaptor, two sets of fitting screws, a blue SATA cable, a CD with the user manual on, case badge as well as an external USB3.0 enclosure and cable and a screwdriver with changeable tips. It’s safe to say that they literally give you everything you need; well bar the system to install it into. 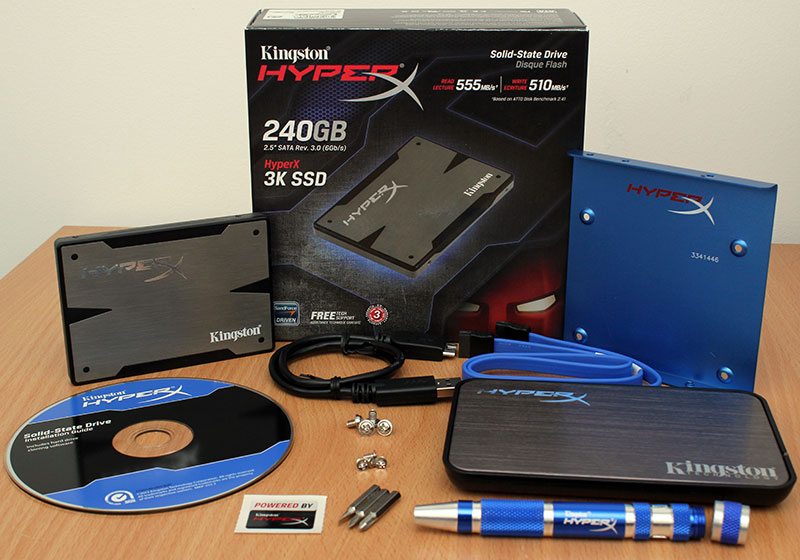