Since the first wireless storage device came into my hands a few months ago (at a time when I couldn’t see the point in having such a device when mobile internet speeds were becoming greater and cloud storage becoming more popular), I’ve seen a better side and more applications for such units and since the market potential that these have.

The MobileLite Wireless that I’m having a look at today is not the first wireless storage device that Kingston have brought market and their ever popular Wi-Drive as shown that such products are sought after due to their ease of sharing files across multiple devices at once, making them ideal for say storing extra movies on for the kids to watch on their tablets on long journeys or for working on documents between multiple devices for businessmen on the go.

Over the Wi-Drive, the MobileLite Wireless has one or two more features to offer, including a built in battery for charging a mobile device such as a phone, and an SD card reader and USB instead of built in flash, giving greater flexibility in the capacity of storage that is accessible whilst on the go.

Inside the box, the unit itself comes snugly wrapped in bubble wrap on top of the accessories the lie underneath. As far as accessories go, there is not much required with a short USB cable for charging the device up and a microSD to SD card adaptor alongside a brief instruction manual to get you started. As noted on the bottom of the box, the MobileLite works with both Andriod and iOS devices and their respective apps can be downloaded from Google Play – MobileLite for Andriod and from the App Store – MobileLite for iOS. 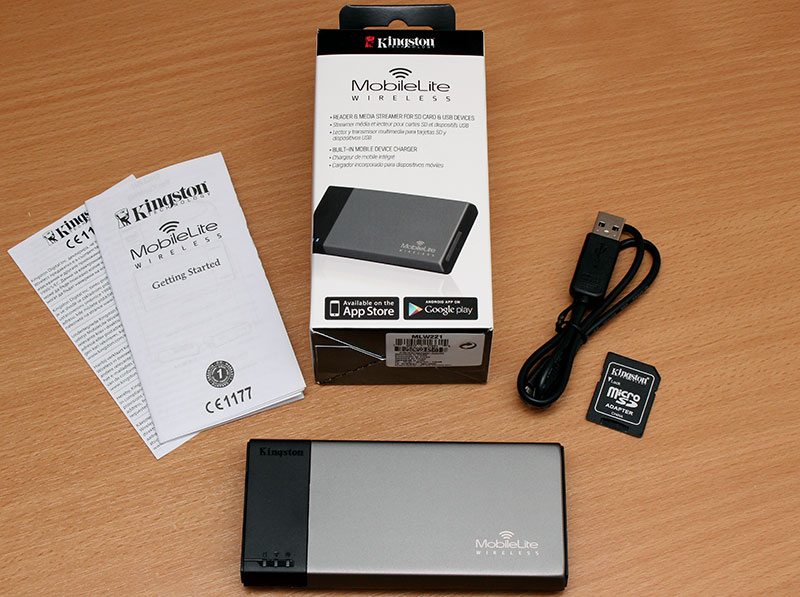