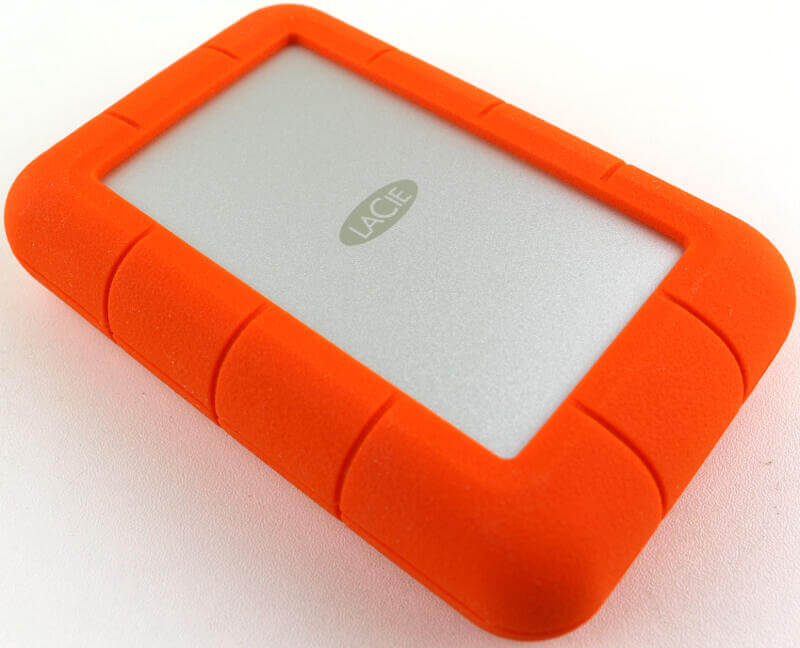 I’ve had the pleasure to review several of LaCie‘s Rugged-series drives in the past, and it’s always been a pleasure. I have no doubt that I’ll have the same experience today where I’ll be taking a closer look at one of the newest versions: The Rugged RAID Pro (product link) with 4TB capacity.

The new Rugged RAID Pro was introduced at NAB 2018, and now it’s available. The drive continues all the things we know and love about the Rugged series: The durability, performance and the Neil Poulton design. 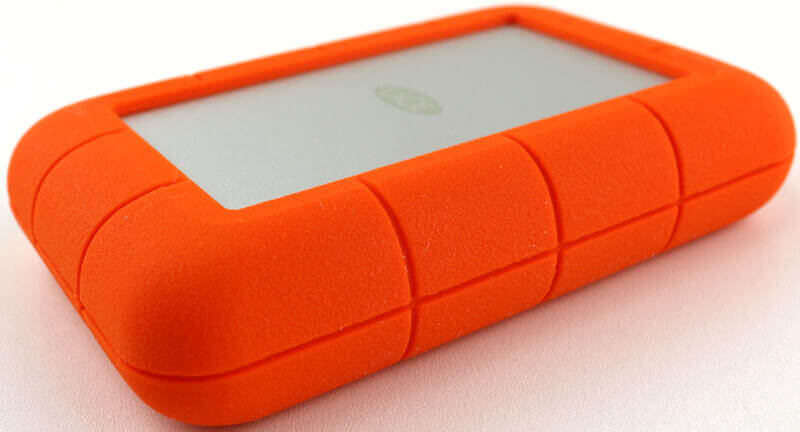 Rugged and durable portable drives aren’t new, not as such. But LaCie’s Rugged RAID Pro goes beyond traditions with its features. As the name reveals, it has built-in RAID capabilities. With either RAID 0 or RAID 1 configurations, you can get increased performance and peace-of-mind with a second copy of your files. That’s on top of an already extremely durable drive. A drive that can withstand the harshest areas you can go.

The Rugged RAID Pro also comes with a built-in SD card reader. That’s a feature which will be loved by anyone who’s on the road with a portable system that doesn’t have a card reader. Offload all your files from your SD cards with ease, and without having to carry yet another device with you. 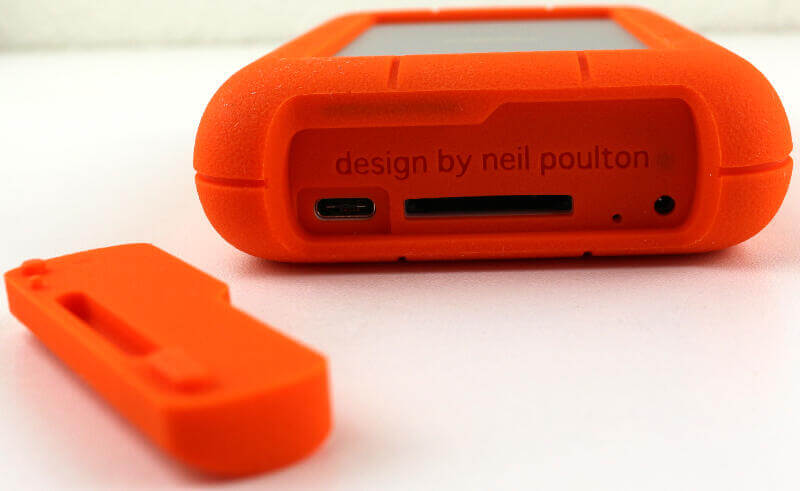 Not The First Rugged with RAID

The Rugged RAID Pro isn’t the first RAID drive from LaCie in this series. The original LaCie RAID was and still is a great drive, but there are some advantages. The new drive is thinner and lighter than its predecessor. You can configure the RAID features through the LaCie RAID Manager, which is a familiar software to most. It is a truly versatile travel companion for busy videographers and professional photographers. 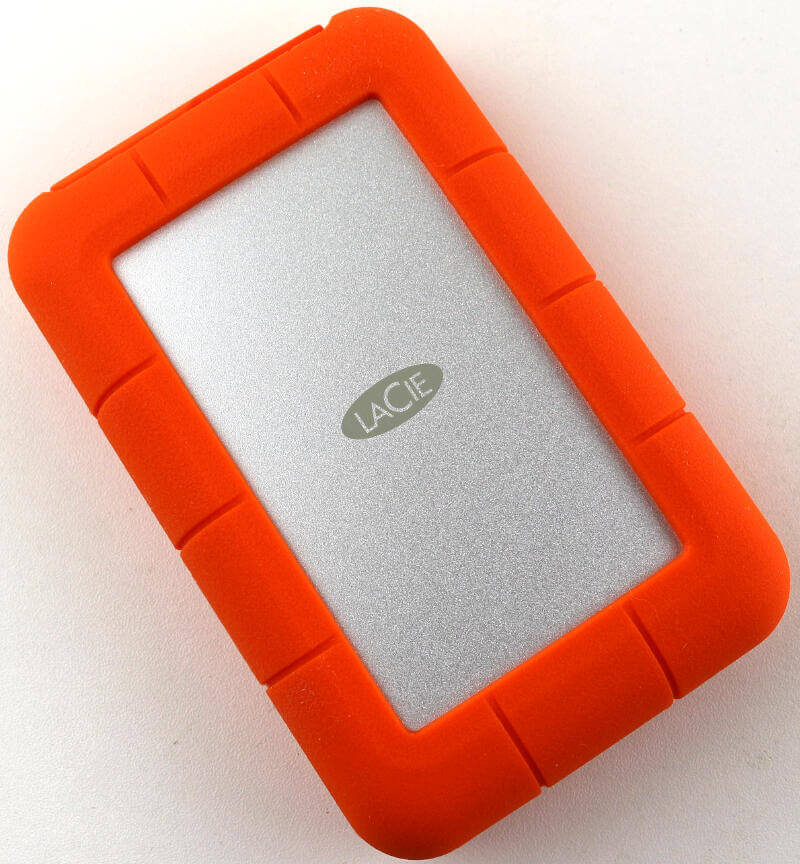 LaCie’s Rugged RAID Pro is ready for the newest systems with its USB 3.1 Gen.2 Type-C interface. Users with older systems won’t have to worry either as the drive is backwards compatible and comes with a USB 3.0 Type-A cable too. Of course, there’s also the above-mentioned SD card reader built right into the drive.

The official speed rating for the Rugged RAID Pro is set at 250MB/s, which is right on par with a 2-disk 2.5-Inch RAID setup. That’s a good sign as it shows that the hardware isn’t bottlenecked anywhere.

LaCie backs the Rugged RAID Pro with a 3-year warranty which in itself speaks for the quality.

There’s also a power port on this drive. With 2 drives inside, there’s the risk that your USB port won’t deliver enough power to run the drive. USB 3.1 Gen.2 can easily deliver enough, but the previous standards will have trouble. Luckily that’s not an issue with the included AC/DC power adapter.

It can’t come as a surprise to anyone that this is a rugged drive. After all, it is named so. The Rugged RAID Pro has an IP54 rating against dust and water, it can withstand a 1-ton car, and drop from a height of up to 1.2 metres.

The first digit in the IP rating, the 5, stands for dust ingress protection. It is the second best rating which means that dust ingress isn’t entirely protected, but it must not enter in sufficient quantity to interfere with the operation. The second digit is for liquid ingress protection. 4 is at the lower end of the scale and it means that the drive can withstand splashing of water from any direction. 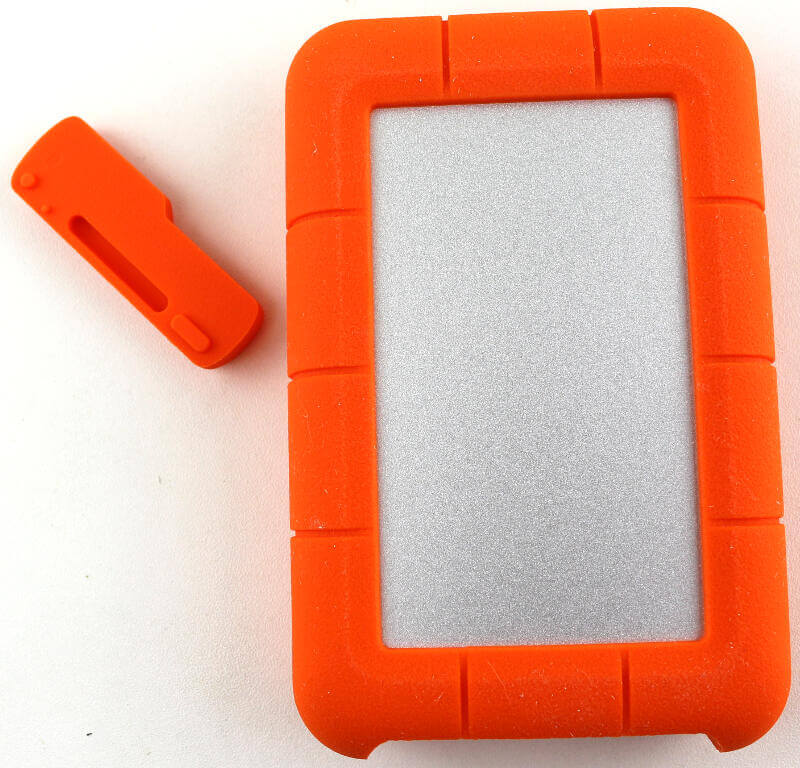 The ports and SD card slot are protected on the go by the included cover. There’s also an extra cover included in the event that you lose the first.

The LaCie Rugged series is designed by industrial-product designer Neil Poulton. His designs have won countless awards, including the prestigious IF Design Award and the Red Dot Design Award on multiple occasions. Neil Poulton specialises in the design of deceptively simple-looking mass-produced objects’, and this Rugged series is no different. It is also the same design as we know from all the other LaCie Rugged drives. 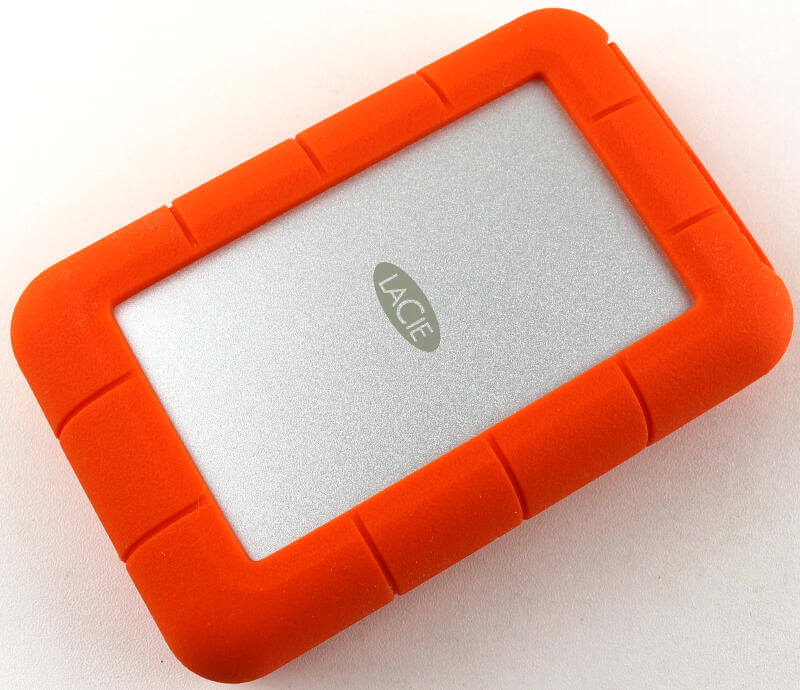 As familiar as the drive is, the package is too. It is the same type we’ve seen the previous Rugged drives come in. The front has every vital detail as well as a picture of the included drive. Connection options, capacity, performance, and features are all printed here. There’s also a sticker about the bonus-inclusion of Adobe Creative Cloud All Apps plan for one month. 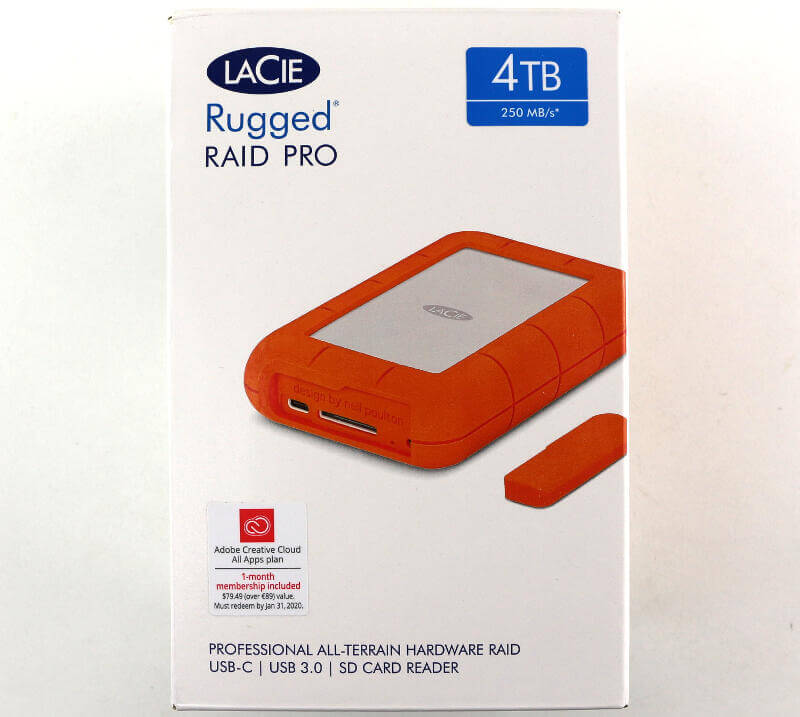 The rear side features more details on the powers and protection features. A feature that isn’t shown on the front is the inclusion of a 3-year recovery service. This is Seagate’s offering when it comes to recovery of the data from a failed drive. So even if the worst case should happen, there’s a very high chance that your data can be rescued. 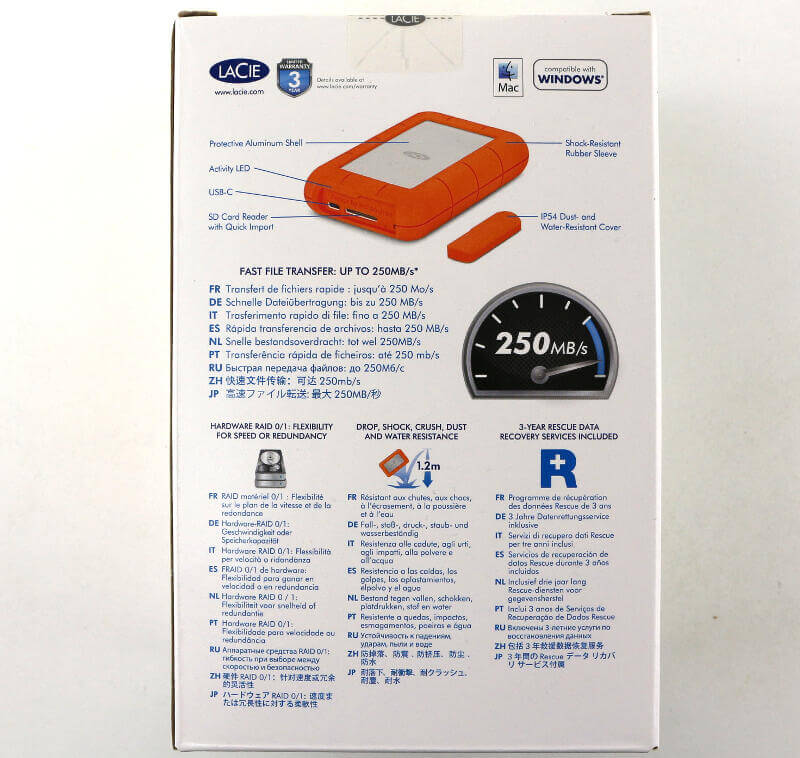 While descriptions are nice, specifications and requirements are better. Those are printed on the side of the box. 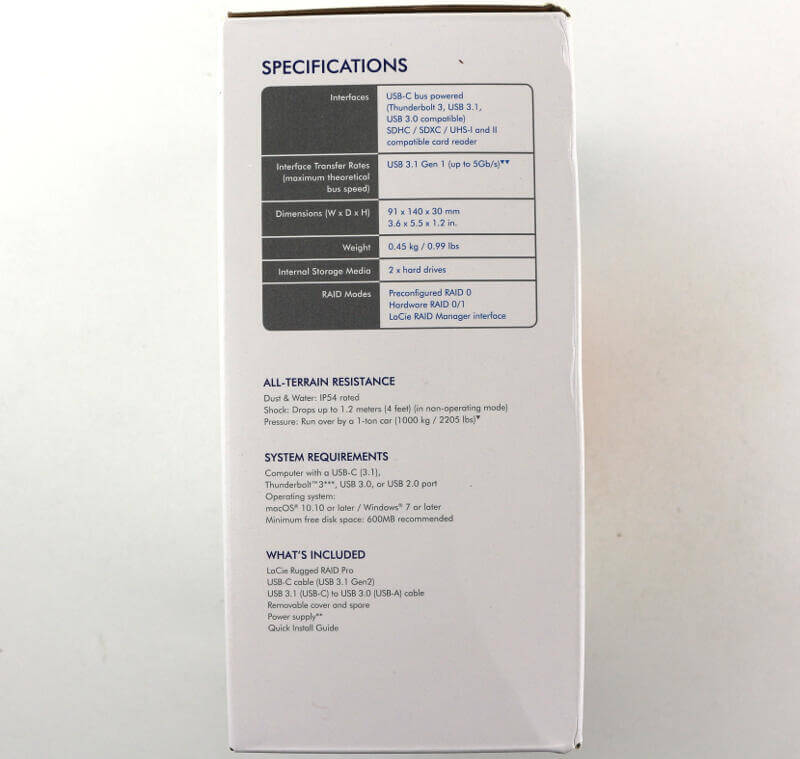 The other side has an actual-size representation of the drive, giving you a great view of how big it actually is. 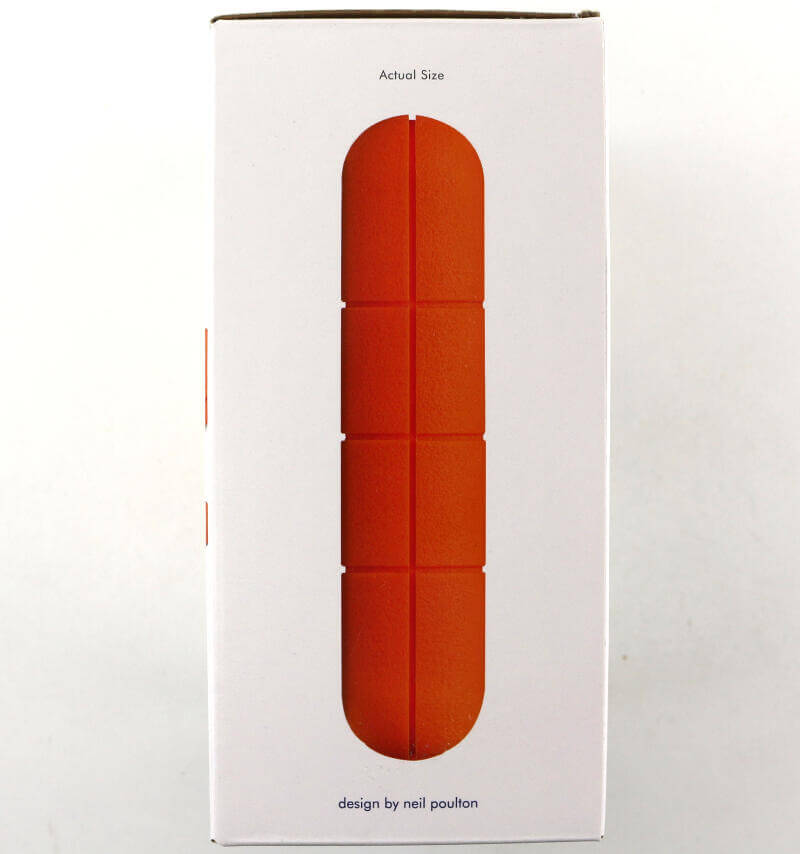 There’s a bit more on the top of the box where the ports and LEDs are described. 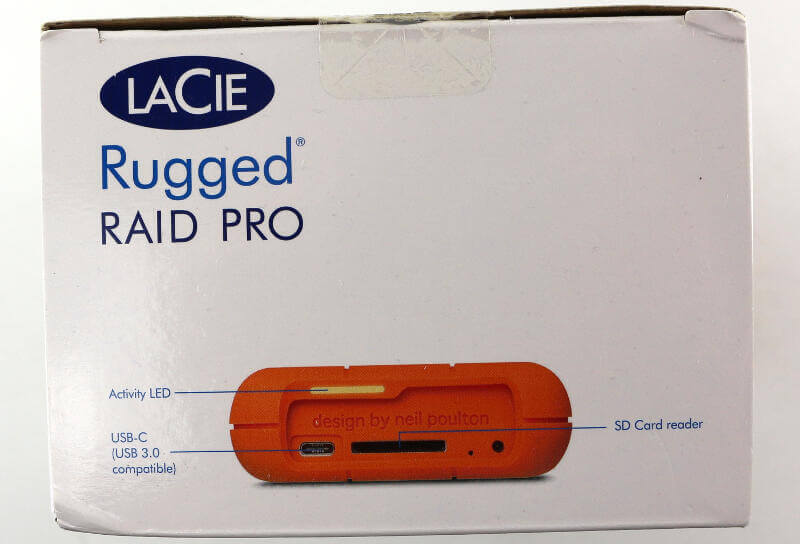 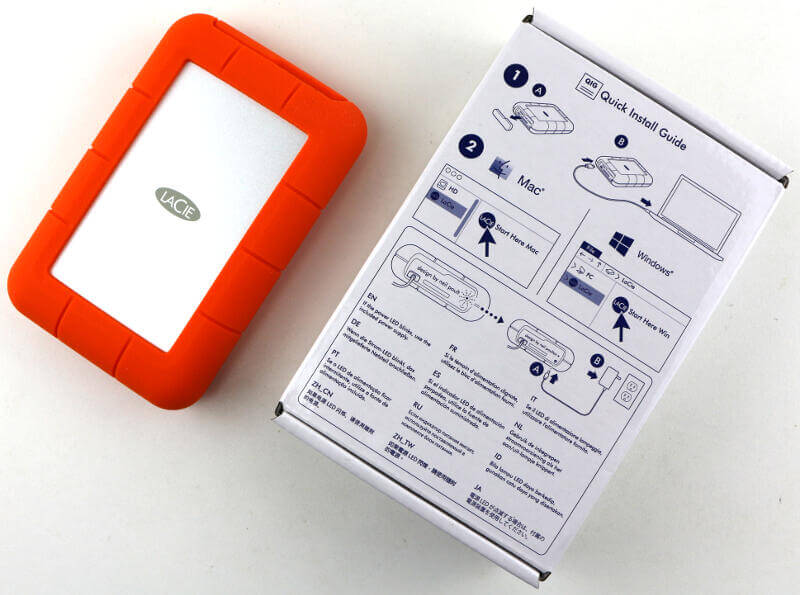 Inside the accessory pack is an AC/DC adapter with plugs for pretty much every region in the world. After all, a drive built to take on the road needs to be usable wherever you go. There’s also an extra port cover, a USB-C to USB-C and a USB-C to USB-A cable included. 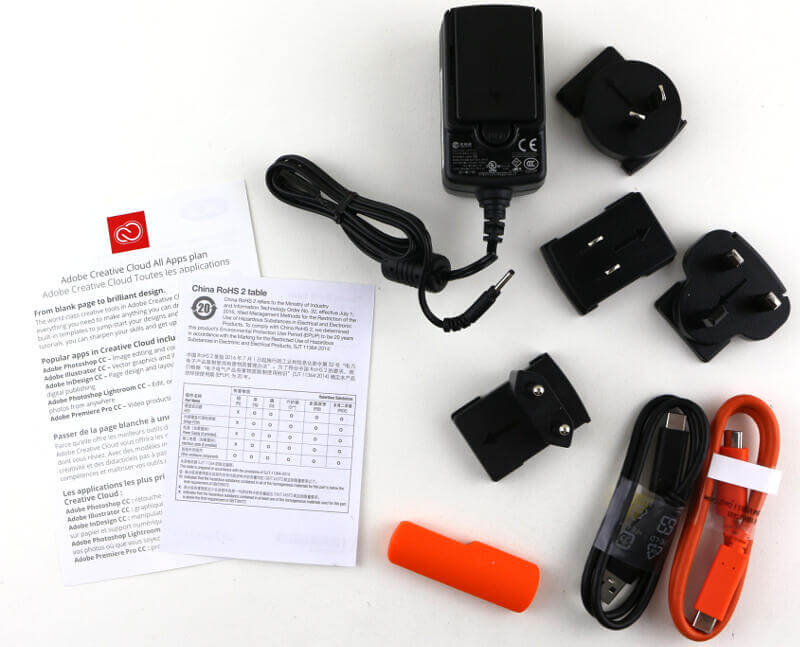