Those of you who are looking forward to Intel’s new Core i7 Broadwell-E are in for a bit of a disappointment, as a recently leaked company roadmap slide has revealed that this new addition will not arrive earlier than Q2 2016. Based on the 5th generation Core “Broadwell” microarchitecture, the chips will be marketed as Core i7-6800 and i7-6900, which might end up confusing some customers. What’s truly interesting about the Core i7 “Broadwell-E” is that it will actually represent Intel’s first consumer processor to feature 10 cores, but the series will also include 6-core and 8-core offerings. 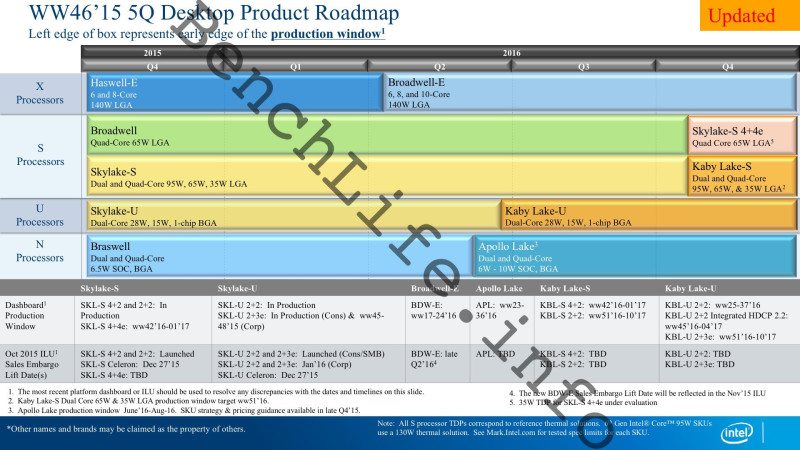 The six-core chip will definitely be the cheapest and will probably retail for about $400, while the eight-core should represent the mid-tier offering at about $600. The ten-core will likely cost $1000, but its performance will probably justify the cost in full. Rated at 140W TDP, these new processors will be compatible with current LGA2011v3 motherboards through a firmware update, which shouldn’t surprise anyone because that’s exactly how the Core i7 “Ivy Bridge-E” was introduced on LGA2011 motherboards. Towards the end of 2016, we’re going to witness the entry of Core “Kaby Lake” processors, which is bound to be even more exciting.

Will you make the upgrade to intel’s Broadwell-E processors, or are you waiting patiently for Kaby Lake?