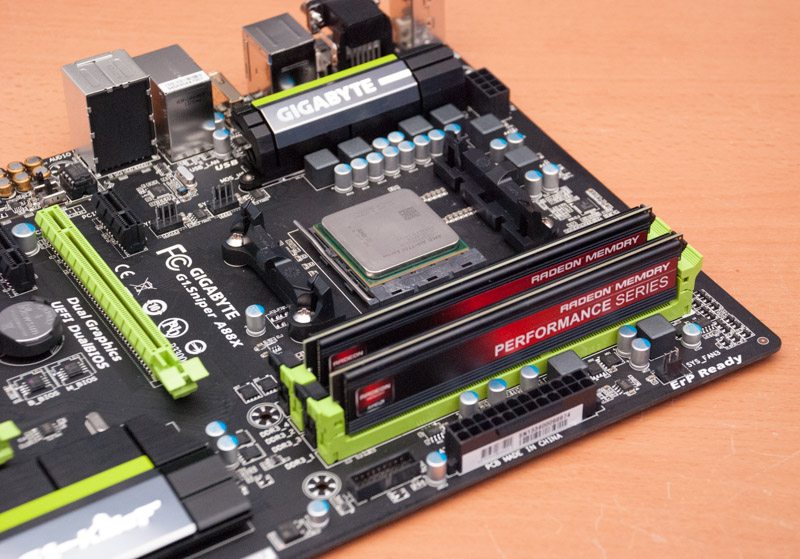 AMD’s Kaveri APUs are dependent on system memory. The easiest way to explain this dependency is by thinking of the GPU on the Kaveri APU as a graphics card, but with one significant difference – on its own it has no video memory. The video memory the Kaveri GPU uses is your system memory, or RAM. In the case of Kaveri APUs the CPU and GPU parts both share the system memory resources equally as part of the hUMA process, though the GPU is more performance-dependent on this memory bandwidth than the CPU is. In effect what this means is that as you increase your system memory frequency Kaveri APUs have more bandwidth available to them and thus perform better.Taking your system RAM from 1866MHz to 2400MHz has the same effect on the Kaveri GPU as would overclocking a DDR3 graphics card by the same amount.AMD has really pushed the benefits of memory scaling for Kaveri and as I’ve already alluded to above these benefits are primarily realised by applications and processes than use the GPU. So this memory scaling article will be focusing largely on the gains in GPU related performance, though we will consider CPU performance and power consumption as well. 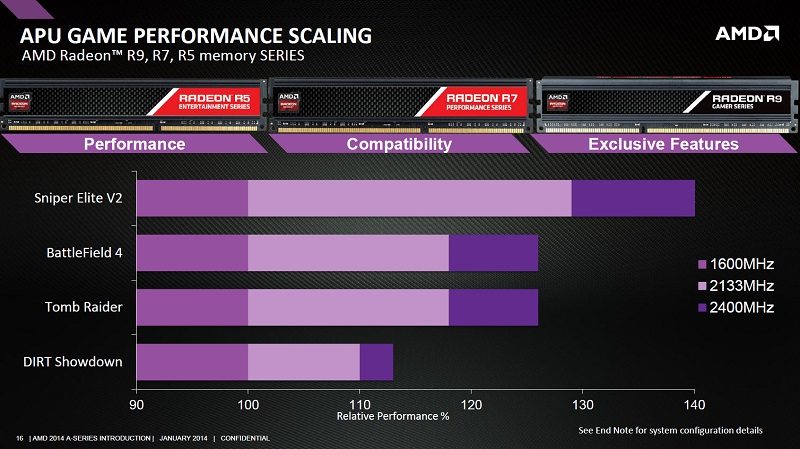 AMD’s own internal figures show promising results. We should expect to see the most performance gains from 2133MHz memory but 2400MHz also offers additional performance, this is because with much computer hardware there is a diminishing return on increasing clock speeds and this is particularly the case with memory. Our testing will be examining the differences in performance in transitioning from 1866 to 2133 to 2400MHz memory on the Kaveri flagship part – the A10-7850K. From the perspective of Kaveri there is a requirement to consider memory more carefully than we would do on most systems where a discrete GPU and high-end CPU are both relatively unaffected by memory speed. I think it is worth considering the optimal memory speed pairings in terms of cost but also the type of user buying each APU. In my opinion I’d expect to see the cheapest A8-7600 APU paired off with 1600 or 1866MHz DDR3, the A10-7700K with 1866 or 2133 DDR3 and the A10-7850K with 2133 or 2400MHz. This is purely on the basis that if you’re buying a more affordable APU you’re unlikely to spend a lot on RAM, and if you’re buying the premium A10-7850K APU you’re unlikely to “cheap out” on low frequency DDR3 when spending a little more on faster RAM can make such a large difference.