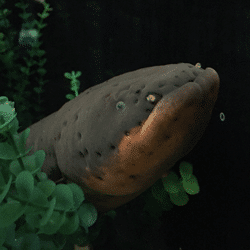 An electric eel at Tennessee Aquarium has been tweeting from his tank, thanks to a modified Raspberry Pi. The eel, named Miguel Wattson, triggers tweets whenever he expels an electrical discharge. The charge is detected by sensors hooked up to a Raspberry Pi, which triggers a tweet – purporting to be from Miguel, but written by the aquarium’s team – to the eel’s Twitter account, @EelectricMiguel.

“In the wild, Electric Eels use their voltage to navigate, stun prey and as a defense mechanism,” said Brad Thompson from the Tennessee Aquarium. “They have complete control of their discharges varying the amount of energy released to meet their needs.”

The project was set up in conjunction with the Tennessee Tech University’s Business Media Center.  “This was a really fun project for our multi-disciplinary team,” Kevin Liska, director of the Business Media Center, said. “They combined electrical engineering and emerging business communication to give the eel a voice.”