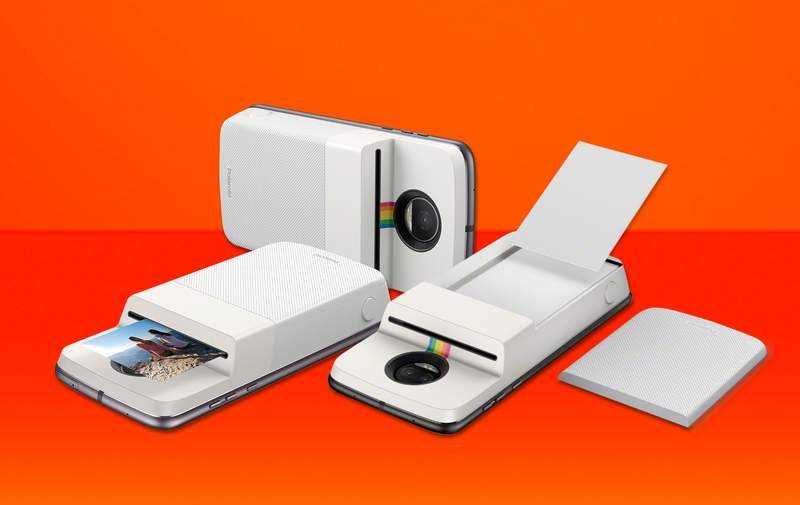 Motorola is announcing that they are going retro for their latest Moto Mod smart phone add-on. Specifically, it is the Polaroid Instal-Share printer which attaches at the back and instantly prints colored photos taken with the motorola phone.  The company has been releasing several interesting add-ons for their Moto Z smartphone line, extending its function further. Previous examples include the moto insta-share projector, which can project the phone’s screen up to 70-inches on any surface. Motorola also has a moto smart speaker with Amazon Alexa functionality. For gamers, they even have the moto gamepad which attaches to the top and bottom of the phone providing controllers.

Polaroid Insta-Share: How it Works

Simply snap the mod on your Moto Z, click the physical button to launch the camera and take a picture, then print right from your phone. The Polaroid Insta-Share Printer even allows you to print your favorite pictures from Facebook, Instagram and Google Photos. Users can print 2×3-inch photos on the spot with the bundled ZINK Zero-ink paper. Since the ink is on the special paper, there is less moving parts inside the device. After taking a photo, users can peel off the adhesive backing and it can be placed almost anywhere.

This is not the first time a Moto Mod was made in partnership with a camera company. In fact, high-end camera company Hasselblad offers their True Zoom moto mod which adds a pancake Hasselblad lens with 10x zoom. There is also a moto 360 camera mod which lets users shoot and edit 360-degree ultra HD video with 3D sound.

What makes the Polaroid Insta-share moto mod interesting however is that it also looks like a retro device. Clad entirely in white and somewhat bulky, it almost looks retro-futuristic straight out of the 80s. It also comes with filters to make the retro feeling in the photos as accurate as possible.

The Polaroid Insta-share Printer is now available for pre-order with an MSRP of $199 USD.