Having seen that AMD’s new Bonaire core has taken to the market a lot better than anticipated with its high level of performance, relative to its price, its very much worth looking at what other options that there are to chose from over the Sapphire and Club3D cards that I’ve already looked at. Next to the line with their over clocked edition card is MSI. Whilst I’ve typically looked at cards from the upper end of the graphics spectrum from MSI, including their GTX670 Power Edition and GTX680 Lightning, its been a long while since I’ve look at a card that sits lower down in their range, let alone an AMD offering at that.

Like many other cards that I look at, this one as mentioned has had an overclock giving it a boost of power over what AMD provide, and with a core clock of 1050MHz and a memory clock of 1500MHz, we should be seeing this card sit mid point between the cards from the brands mentioned above. What could be potentially interesting later on is seeing how well this card over clocks. Whilst this is not normally hot topic of a review, like all other cards that I review, this will be pushed further using MSI’s own afterburner software and given the response I’ve had from their own cards in the past within Afterburner, there is the pre-empted expectation that this will clock better than the other 7790’s that I’ve already pushed – this though is to be found out, after all I could be proved wrong as a lot of it is down the old fable of the silicon lottery. 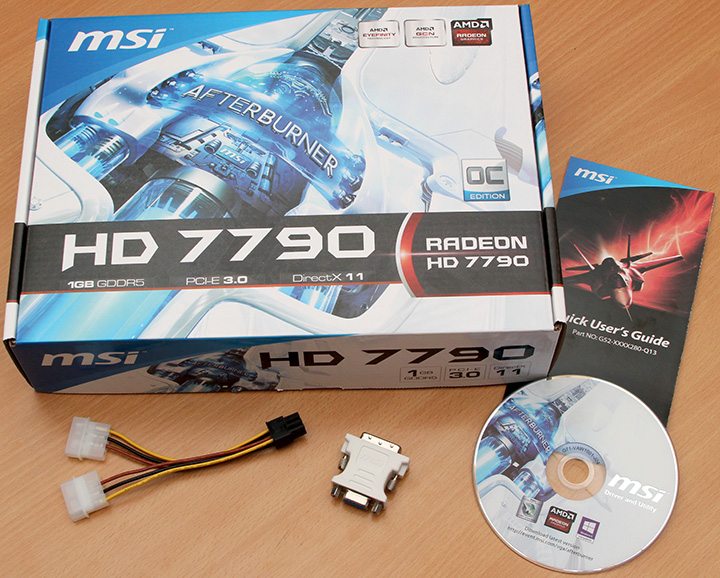 Afterburner is the buzz word on the front of MSI’s blue and white box with the main focus around displaying the over clock that comes on the card and inside with the card we get a fairly standard set of accessories including driver CD and guide, power adaptor and legacy display adaptor.