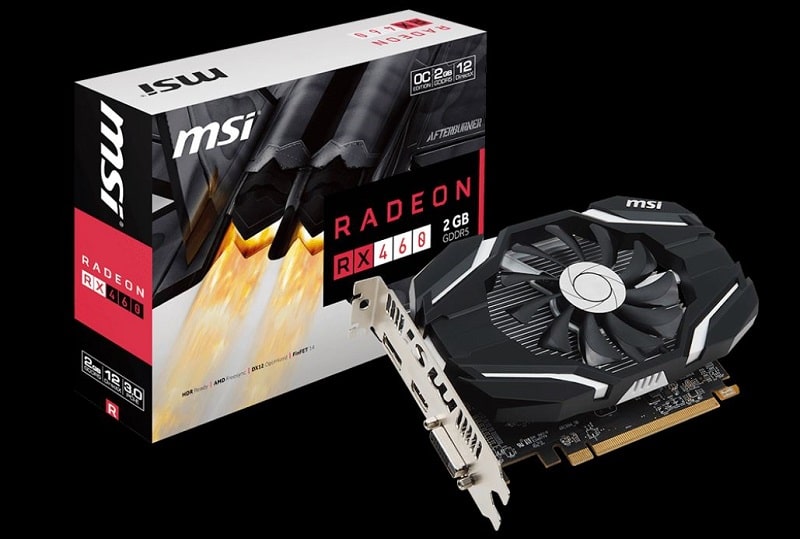 After launching yesterday, many AIB partners have also released their own variants of the RX 460. One brand card that hasn’t been leaked so far has been MSI but they’ve now officially released their first Polaris 11 GPU. Thus, we have the new MSI RX 460 2GB OC which has been quietly posted and launched on the MSI website. Interestingly, there is no press release.

Unlike other custom cards but just like the reference model, MSI has gone with a single fan cooling solution. With the tiny TDP and power consumption, the cooler should do just fine. The tiny factory overclock to only 1,210 MHz, a 10 Mhz gain, likely helps as well. The rest of the specifications remain at stock with 2GB of GDDR5 over the 128bit bus and three display outputs using 1 DP, 1 DVI-D and 1 HDMI 2.0.

The biggest surprise though is the reported 84W TDP which over the 75W limit for PCIe power but the card also appears to lack a PCIe power connector. Hopefully, we’ll get some clarification on that later on. Perhaps we may even get a faster-clocked card with a TwinFrozr cooler  and a higher factory overclock but I wouldn’t count on it.

Guiding the Future of Gaming

The 4th generation GCN architecture is engineered for gamers who play anything from the latest MOBA’s to the most popular AAA titles. Asynchronous Shaders and an enhanced Geometry Engine power new levels of smooth gameplay performance.

Experience the next level of immersion with the world of VR gaming and entertainment with Radeon RX graphics cards powered by the revolutionary Polaris architecture.

Puts an end to choppy gameplay and broken frames with fluid, artifact-free performance at virtually any framerate.