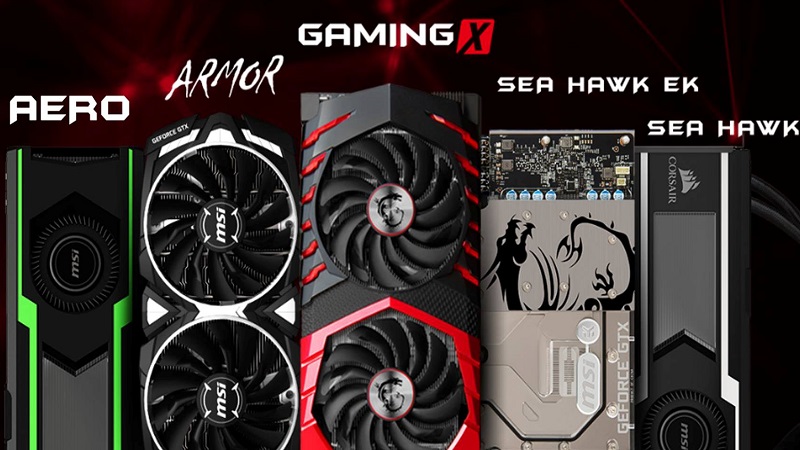 With the Nvidia GeForce GTX 1080 Ti release roll out well under way, we are now seeing more partner cards make their way forward. MSI has been at the forefront with a massive variety in their family of graphics cards. With the new GTX 1080 Ti release, MSI is largely moving forward with a higher end and refreshed lineup based on the GTX 1080. Just like the earlier Pascal lineup, we have the GAMING X, ARMOR, AERO, SEA HAWK and SEAHAWK EK.

First up we have the GTX 1080 TI GAMING X which was teased earlier. As we’ve seen from an earlier teaser, the card features the same Twin Frozr VI cooling solution used for the GTX 1080 GAMING X. This likely uses the same Torx 2.0 fans and Zero Frozr technology along with red LED lighting for the fans. We can also see glimpses of the full cover backplate, memory cooling plate and PWM heatsink.

Next up we have the two liquid cooled or hybrid liquid cooled solutions, the MSI GTX 1080 Sea Hawk EK and Sea Hawk. The EK of course, features the full EK water block and appears to be a custom design with 8+6pin PCIe power connectors. The regular Se Hawk features a more substantial upgrade with a new shroud design and perhaps an updated heatsink array and Corsair AIO as well.

Just like the Sea Hawk, the GTX 1080 Ti Aero features an updated cooling shroud along the same lines but with a green and black theme. It will be interesting to see how well this blower will hold up against the reference Founders Edition. Last of all we have the GTX 1080 Ti ARMOR, not much appears to have changed at least on the surface. We have a similar design to the one we saw with the GTX 1080 ARMOR with the same black and white theme. All that is missing now is the Lightning which will hopefully arrive soon.