The MSI Vortex G65VR 6RE is a visual masterpiece and exudes a premium feel due to the contoured aluminium sides and two-tone colour scheme. Furthermore, the side pieces have been coated in a sophisticated silver finish which contrasts with the black central aspect in a beautiful manner. This colour combination is perfect and offers a stunning appearance without being too ostentatious. Rather impressively, the curved side panels attach to the front housing at an eye-catching angle while maintaining a strong shape. In my opinion, the streamlined, distinctive shape is nothing short of sensational and has a certain aura from every conceivable angle. The circular base is another highlight and prevents the unit from wobbling too much even if you’re a heavy typist. Not only that, the base’s simplistic design has a certain level of charm and corresponds with the main unit’s aesthetic design.

Instead of infusing a huge array of connections on the front which would have detracted from the sleek appearance, MSI decided to compromise slightly and house all the ports at the rear. This may be irksome for certain users who wish to quickly attach USB thumb drives but I’d argue the system’s small frame makes this less of an issue. On another note, the power button doesn’t seem detached from the system’s neutral theme and incorporates customisable RGB illumination. From the picture below, you might be able to notice the embedded LED strip positioned between the side panel and front section. This allows for a more spectacular design and helps the MSI Vortex G65VR 6RE to stand out. 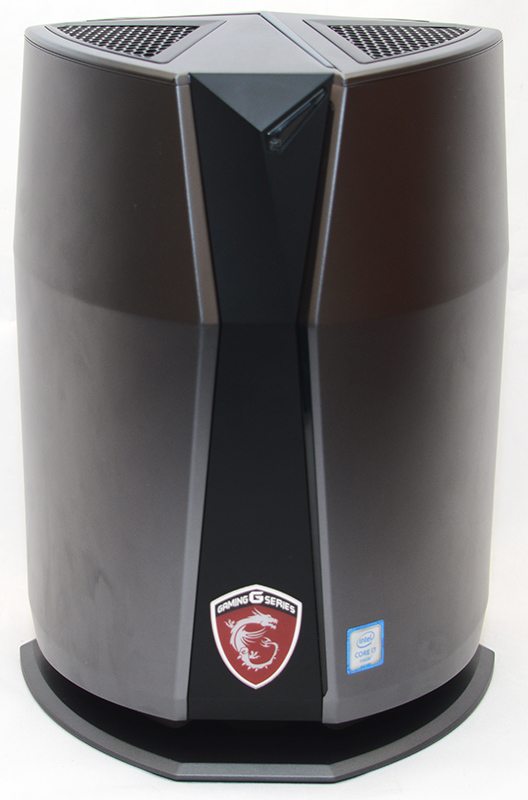 The rear portion houses a huge array of connectors including S/PDIF Out, a microphone jack, headphone jack, four USB 3.0 ports, two HDMI 2.0, two Killer E2400 RJ45 ports, two Thunderbolt 3 ports and two Mini-DisplayPorts. MSI has finished the audio jacks with a gold-plating to reduce interference and prevent corrosion over time. Also, I’m pleased to see the HDMI ports are capable of outputting to a 4K display while maintaining a 60Hz refresh rate. The ability to connect two Thunderbolt 3 devices is a welcome addition and can be useful when running external GPU enclosures or other high-bandwidth devices. The only minor grievance I have is the lack of a full-size DisplayPort which forces customers to buy an adapter. It’s not a huge deal but perhaps it would be advantageous to include an adapter as a way of improving the setup experience.

Interestingly, MSI has positioned an attractive image of the company’s MSI gaming dragon which lights up in a fierce red shade. This creates an absolutely beautiful effect when combined with two rear lighting strips. Positioning the dragon branding behind a grill creates the perception that it’s being imprisoned. Unfortunately, it’s impossible to gaze at this stunning design once the system is facing towards you. 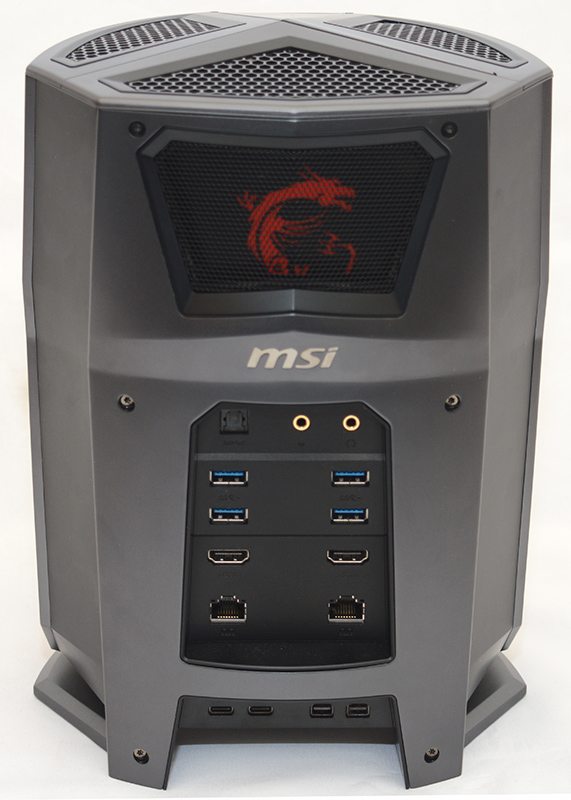 Opening the MSI Vortex G65VR 6RE isn’t particularly easy and could void your warranty. Nevertheless, if you wish to inspect the hardware layout or change the memory configuration, a security Torx screwdriver is required. To proceed, carefully remove the security Torx screws and gently pry between the side panel and main chassis. Please note, it’s important to adopt a patient approach because one of the side panels contains a cable which powers the RGB lighting. Therefore, you need to ever so slightly lift the side panel at an angle, before unplugging the cable and removing the entire piece. Here we can see the panels are constructed to a high standard and the RGB cable has been held in place using two plastic supports. 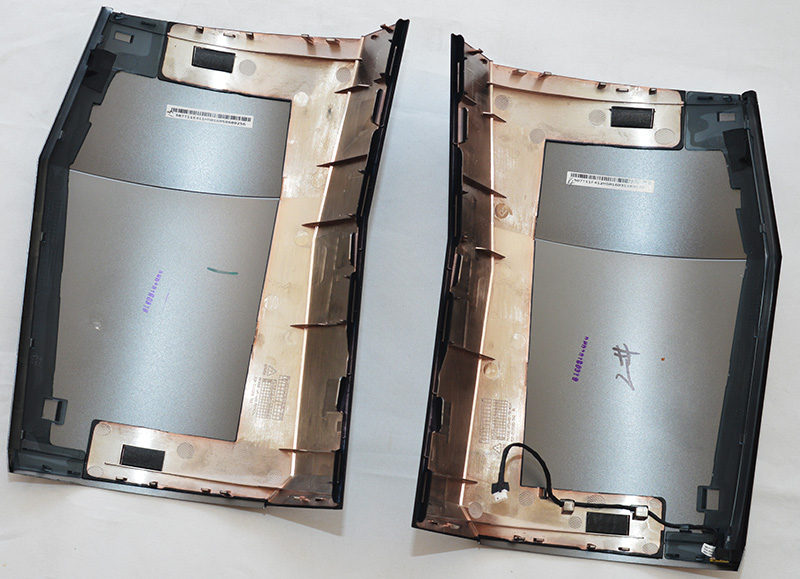 Once the side panels have been unclipped, the cooling hardware, DDR4 modules and other essential system parts are revealed. The design is extremely neat and everything is tightly packed into the chassis to minimise the system’s size. The dual GTX 1070 graphics cards are cooled by efficient heatsinks with a dense fin array and assortment of copper heat pipes. 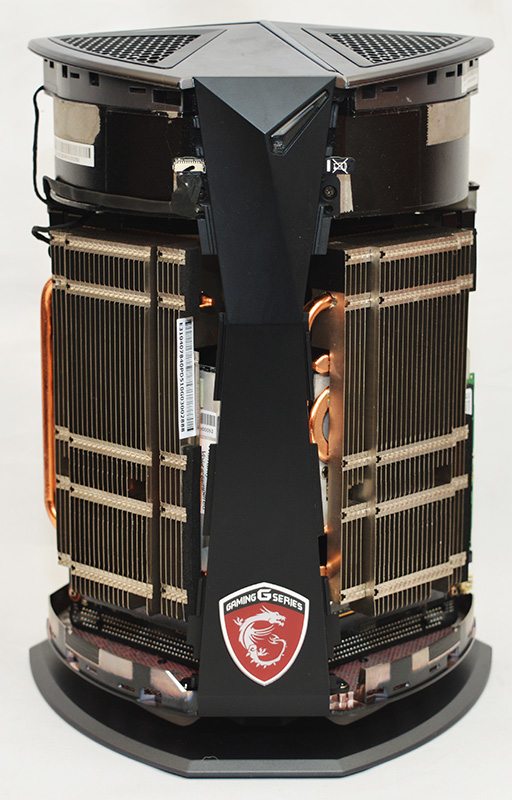 The system’s storage device slots into position next to one of the PCB’s edges and has enough ventilation to prevent overheating. Honestly, the hardware arrangement is exemplary and you cannot help but admire the motherboard design. From this image, it’s also clear that the CPU heatsink is rather large and held in place at specific mounting points. The hefty heat pipes protrude outwards but it’s not enough to interfere with the side panels. 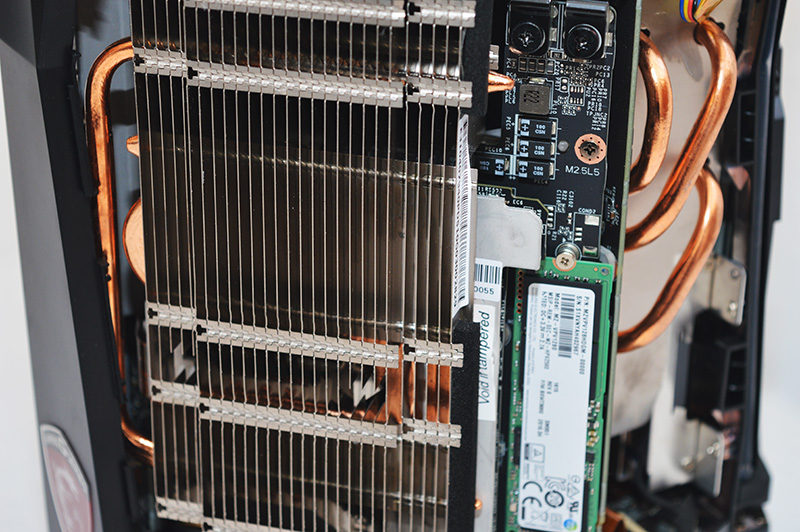 On the opposite side, the four DIMMs are installed at a slight angle which makes sense given the curved shape. As expected, the modules are hidden near the edge to provide additional space for the CPU and SLI configuration’s cooling apparatus. This is a logical step and showcases MSI’s thoughtful PCB design. 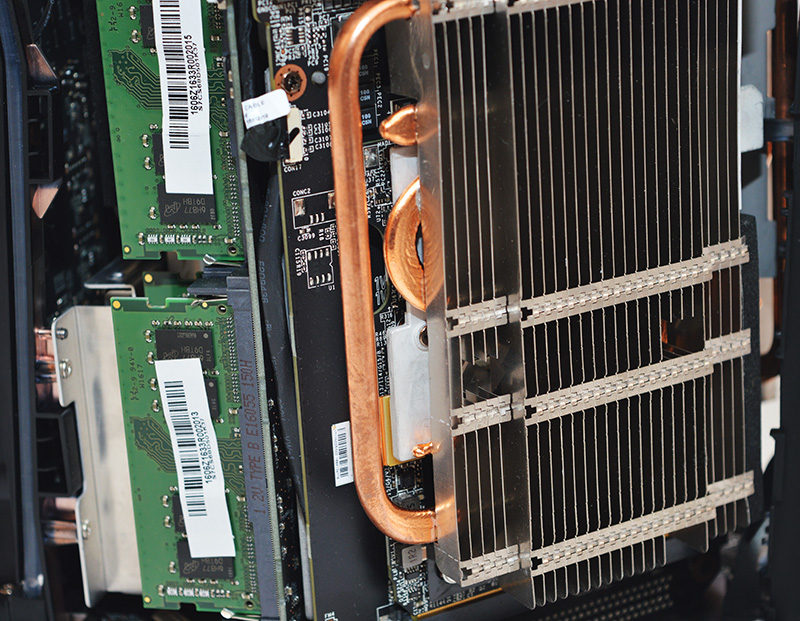 To prevent vibrations, MSI opted for some luxurious foam shielding on the GPU’s heatsink. On another note, the PCH is connected to the mainboard with a flat flex ribbon cable. 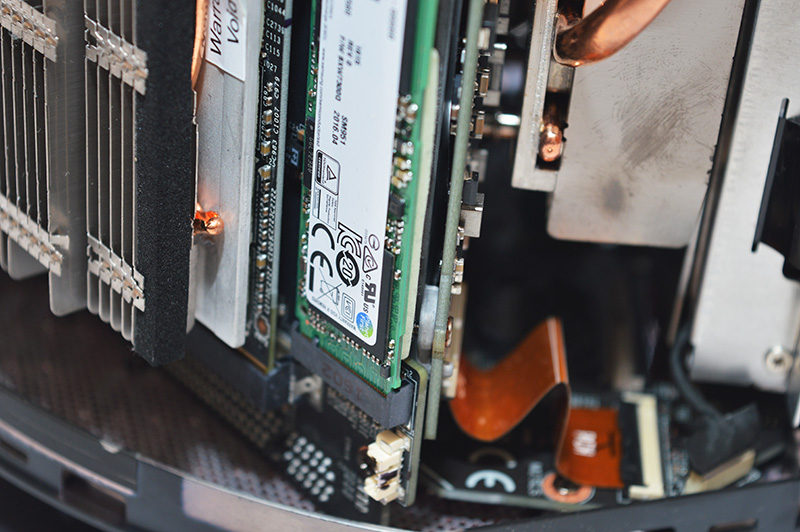 Rather impressively, MSI has engineered an ingenious way of including a 450-watt 80+ Gold SFX power supply without impacting on the product’s sleek shape. As you can see, the base incorporates a cut-out specifically for the power supply which feels extremely rigid. On another note, the stand contains three large rubber feet to prevent the system from moving around. Here we can see the system’s ventilation to effectively draw cool air in the bottom which rises upwards through the cylindrical design. 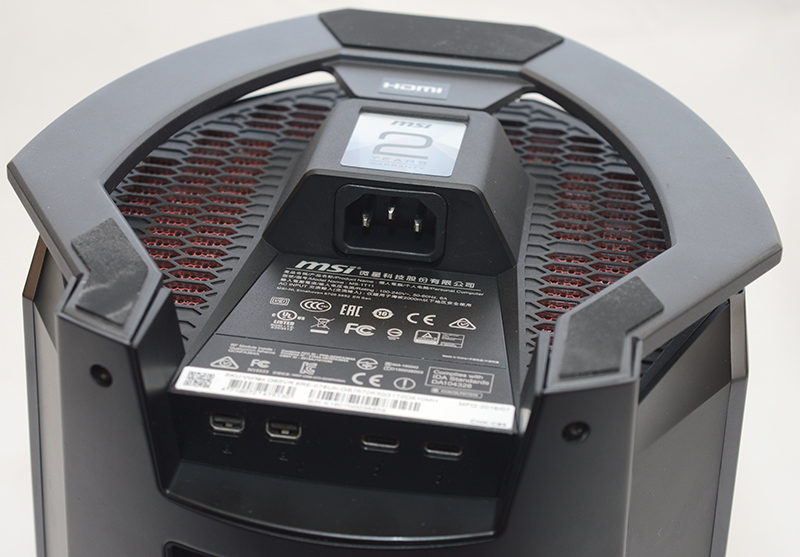 MSI’s Storm Cooling system relies on three vents in the top which eject the hot air to maintain respectable temperatures. This combines with the air intakes in the bottom to create a cyclone effect and dissipate heat surprisingly well in a tight, enclosed frame. 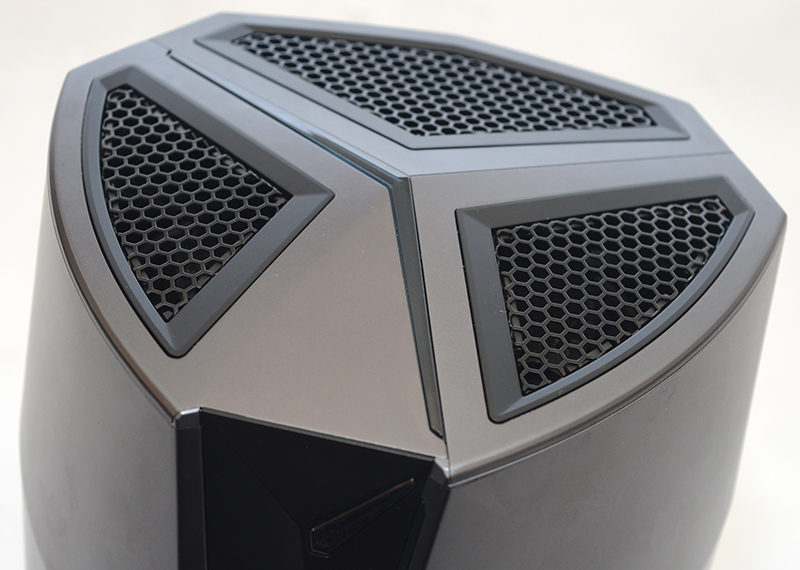 Towards the front of the system, there’s a stunning MSI gaming badge which injects a hint of colour in a sophisticated manner. Also, the dragon emblem lights up in a white shade and complements the unit’s RGB lighting. 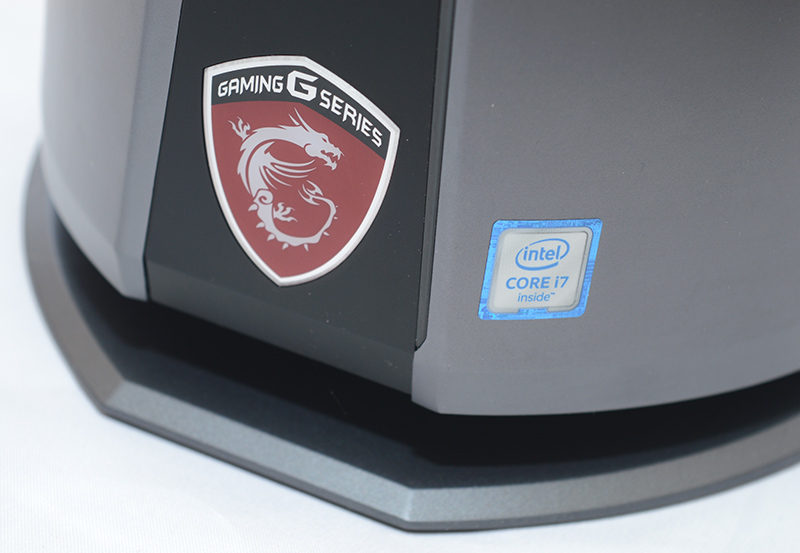 Included with the system is a software package entitled MSI Dragon Center which neatly stores a host of essential utilities. On the first page, the end-user is greeted with a screen to quickly access a wide range of applications. Of course, it’s possible to add other programs yourself such as Steam and MSI Afterburner. 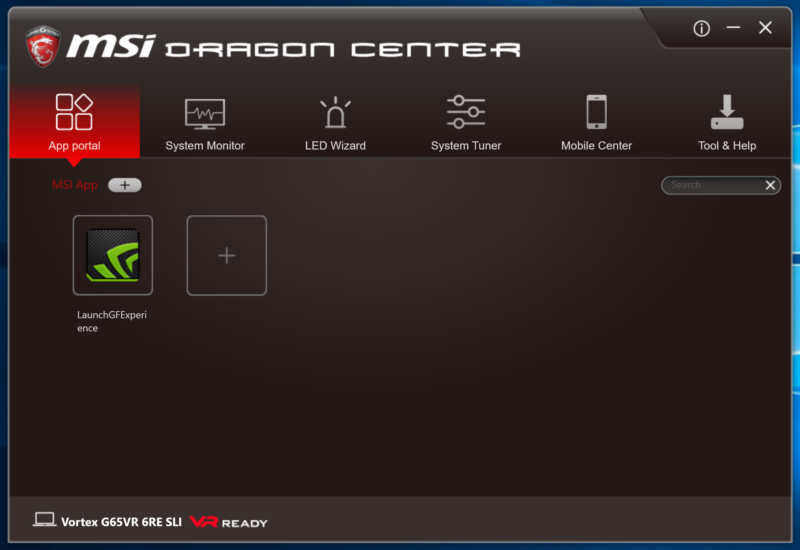 The System Monitor tab displays key statistics regarding your machine’s health and helps you to diagnose the source of any strange performance problems. While the amount of information is fairly brief, it’s presented in a wonderful way which keeps things simple. 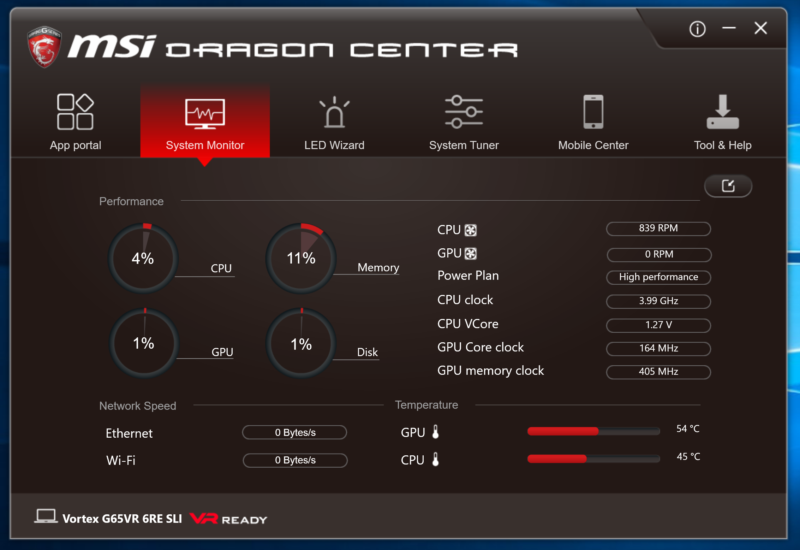 Next up is the LED Wizard which can be useful to customise the Vortex’s integrated lighting system. Here you can choose between a number of stylish effects or simply select your favourite colour. 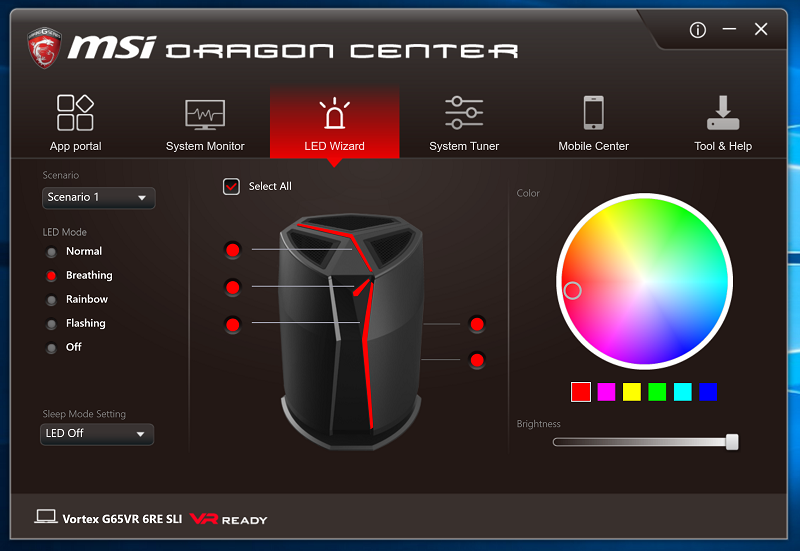 In the System Tuner, the software can automatically optimise the product to create the best possible VR experience, although I couldn’t test what this entailed because there wasn’t any VR equipment in the office. The Shift sub-menu contains different modes which change the product’s behaviour. For example, the Sport profile offers maximum performance while the ECO option reduces the voltage and frequency to reduce the power consumption. As you can see, it’s possible to create a custom profile and manually adjust each setting.

Another great feature is the ability to modify the fan speed based on your own requirements. As its name suggests, the Auto mode detects system loads and finds a good balance between temperatures and the noise output. The basic option sticks to a particular fan setting and doesn’t dynamically adjust values too much. Initially, I was perplexed by the difference between the Auto and Cooler Boost profiles since both appeared to serve similar functions. Apparently, the Cooler Boost has the potential to run at a more aggressive curve for maximum performance. The RGB section is really straightforward and allows you to modify the colour hue based on different scenarios. 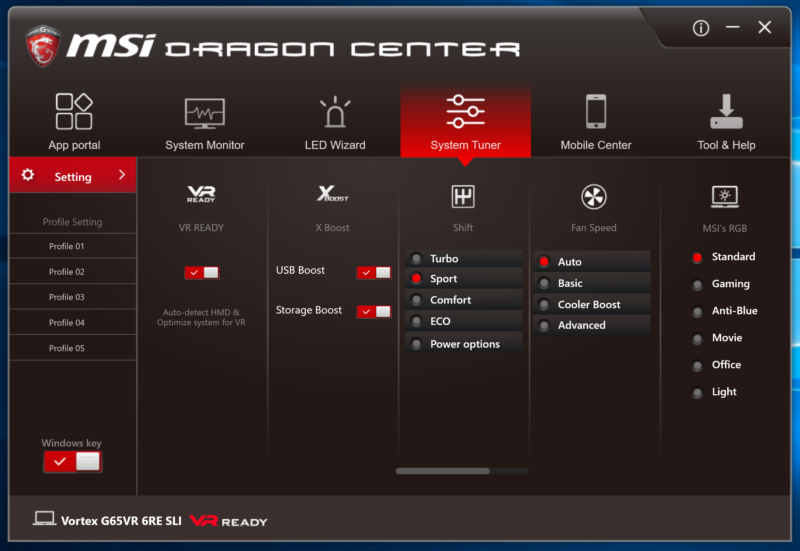 The Mobile Center is a fairly intriguing creation and allows you to control the laptop with any Android mobile device once the Dragon Center application has been installed. This isn’t something I’d use and struggle to understand why anyone would want to access their PC via a smartphone. However, it may be a decent tool for some people. 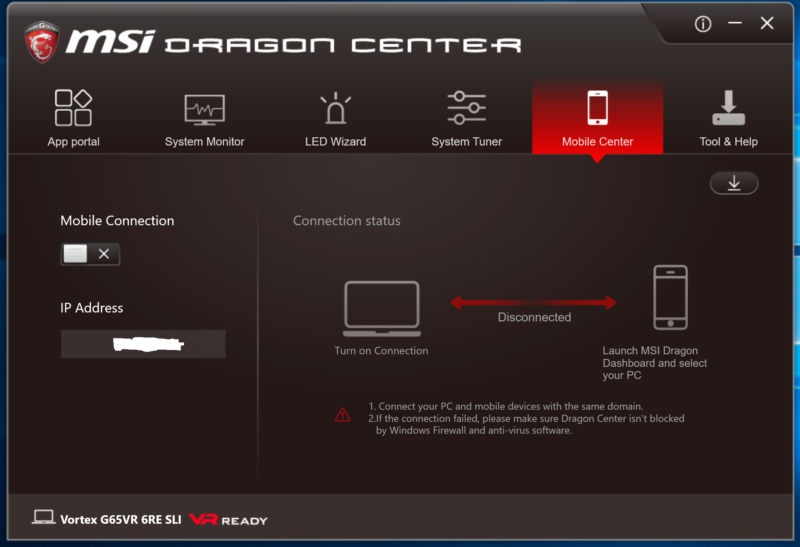 On the final page, you can burn recovery media from an ISO, ask directly for technical help. calibrate the battery, access the user manual and register your purchase. This is a great selection of options for beginners who require some assistance and haven’t got the expertise to know where to find technical answers. 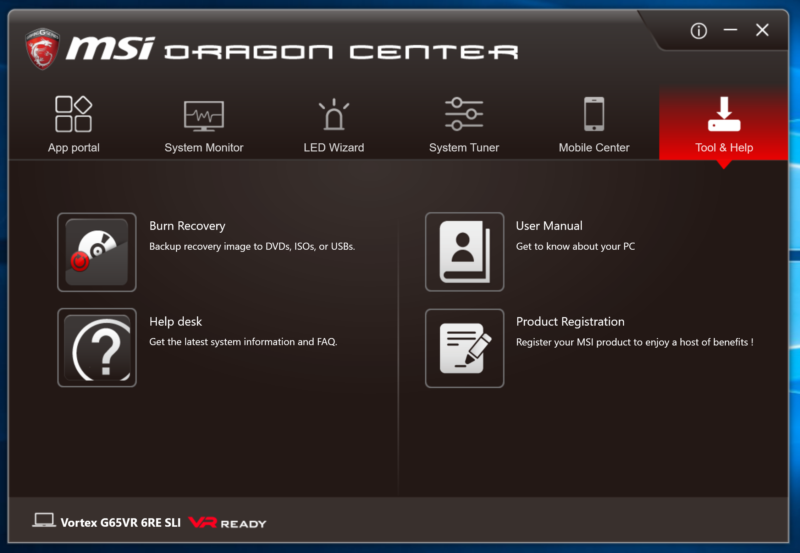