Whilst at CeBIT earlier in the year, I swung by the MSI booth to see what products they had to show off to the world. Now for most people that attended the show, being able to look around MSI’s booth was not going to be possible as they were situated in an area that was out of bounds to the general public, meaning that only those associated with the industry, like us at eTeknix, could have a look. Whilst on their stand, there was something that caught the eye and in some respect looked a little odd. Typically when we see MSI motherboards from a glance we expect to see the blue or yellow highlighting that appears on their boards, however one cabinet housed something different and in some respects a little bit special.

This change that caught the eye is MSI’s new line of gaming orientated motherboards. The obvious question is why do they stand out so much? Well until now, MSI have stuck with blue or yellow schemes on their boards, but the gaming line use red – which to some is an automatic association with gaming. So why the new line? Well a number of other key players in the market have their own lines of gaming orientated boards, ASRock have the Fatal1ty association, Asus have Republic of Gamers (ROG), Gigabyte have G.1 and now MSI have Gaming. Essentially these new boards from MSI are tweaked and tuned variants of the standard Z77 range so at their heart they have a very similar product spec, but they feature some components that will benefit gamers during their online battles. The most notable of these is a NIC from BigFoot networks – the Killer E2200- which reduces in game latency by prioritising game traffic over other network communications.

MSI’s box, features a bold dragon on the front and everything is pointing towards the gaming aspect. A new MSI gaming logo sits to the right above the product name and on the flap to open the box the tag ‘Just Game!’ is printed. Inside there is a decent accessory set with four SATA cables, an SLI bridge, driver CD (although we recommend going to MSI’s website to get the latest drivers), quick connect headers, voltage check cables, a bold case badge, red and black coloured IO shield and various manuals with a door card for warning others in the house that you’re too busy gaming to pay any other attention. 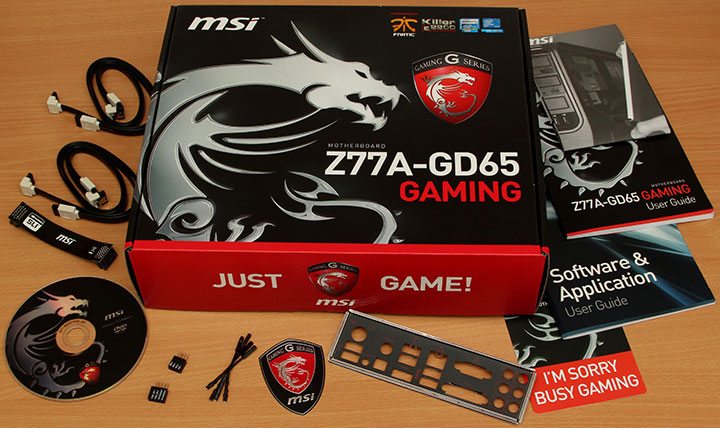