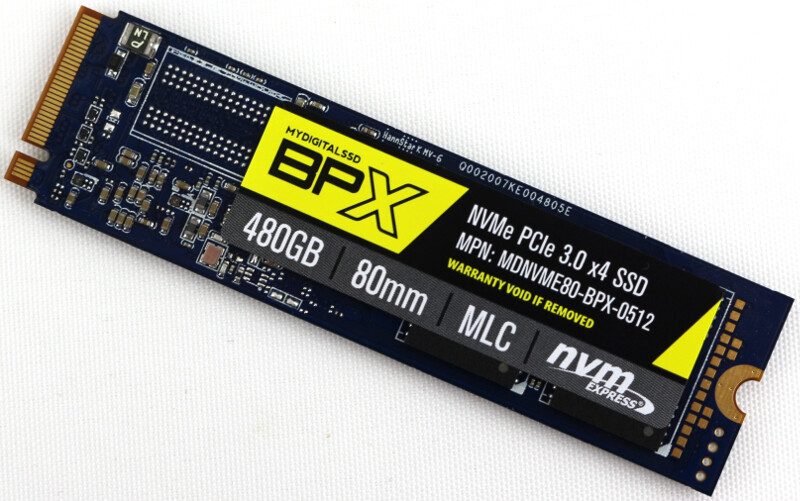 This is a joyful time to be a storage reviewer as more and more NVMe drives get released to the market and as such also find their way into my test benches. Today I’m taking a closer look at MyDigitalSSD’s take on the NVMe sector, as I got the BPX PCIe 3.0 X4 NVMe 1.2 solid state drive in the office for some benchmarks and a closer look.

MyDigital’s BPX comes in an M.2 form factor which is my favourite. There are no cables you need to connect and thereby less clutter inside your system. You don’t need any extra drive bays either, at least not when you got a motherboard with onboard M.2 slots. The BPX comes in a default M.2 2280 form factor and should as such be compatible with most systems, it is the default size for consumer drives. 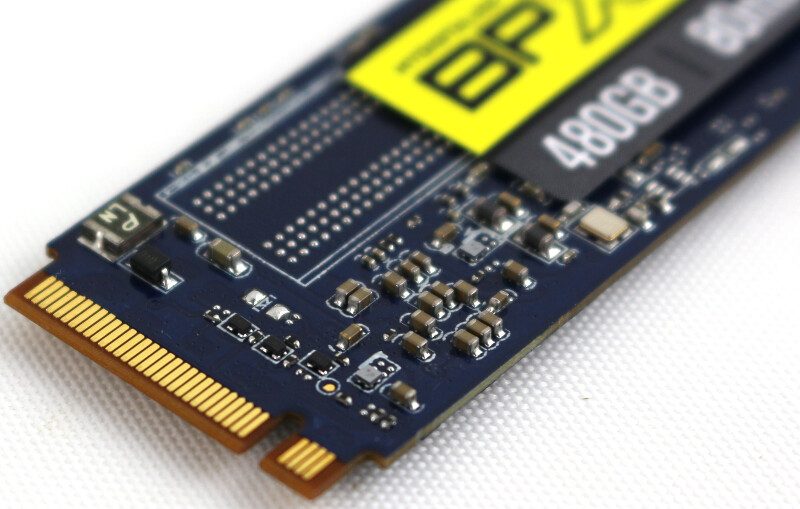 The MyDigitalSSD BPX is built as PCIe SSD using the PCIe 3.0 generation with four lanes, coupled with the NVMe 1.2 interface. That allows the drive to take speed to the next level and far beyond the traditional SATA3 speeds. “Say hello to GB/s : The Next Evolution of Solid State Drives [sic].”

The BPX can achieve up to 2600 MB/s during sequential read operations and up to 1300 MB/s when writing in such a scenario. That’s a lot of performance, even more so if you will be switching from a mechanical drive to this MyDigitalSSD BPX SSD.

The BPX drive features the Phison E7 (PS5007-E7) controller and MyDigitalSSD coupled that with 2D MLC 4-plane high-performance NAND. The result is a drive that takes things to the next level in regards to bandwidth as well as lowered latency times and power consumption. That kind of hardware should stand up against even the most demanding workloads – and if it doesn’t, then you can RAID the drives.

The Phison E7 controller is built with great features and to safeguard mission-critical data with end-to-end data path protection as well as the SmartECC engine that ensures data integrity during high-speed transfers. It also utilizes firmware algorithms such as SmartFlush and an optional P-fail circuitry to prevent in-flight data loss from sudden power interruptions. The controller also supports advanced security features with its 256bit AES engine.

MyDigitalSSD is proud of the drive, there can be no doubt about that when we look at the endurance rating. First, the BPX is backed by an impressive 5-year warranty. Often, long warranties will have small print stating the total amount of data written as an optional warranty end, but not the BPX. Well, it does have such a rating too, but it is set to 1,400 TB total bytes written which is roughly 766GB a day. It also comes with a mean time before failure rating of over 2 million hours. With such a trust in the drive, it has to be good. 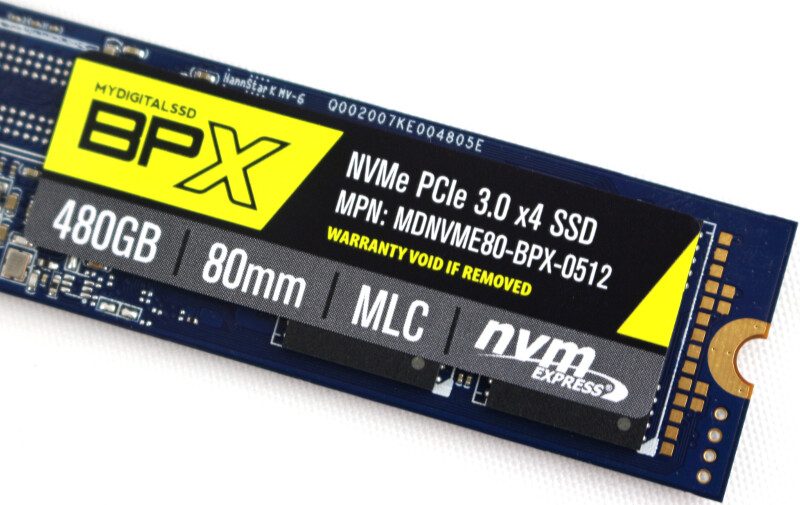 The package for the MyDigitalSSD BPX is a simple blister pack, but what more is needed. The bright yellow inlay colour makes it stand out and you’ll be sure to spot it hanging in a retail store between other more blend packages.

We can see the included drive and accessories directly through the package, so there is no doubt on what we’re getting. 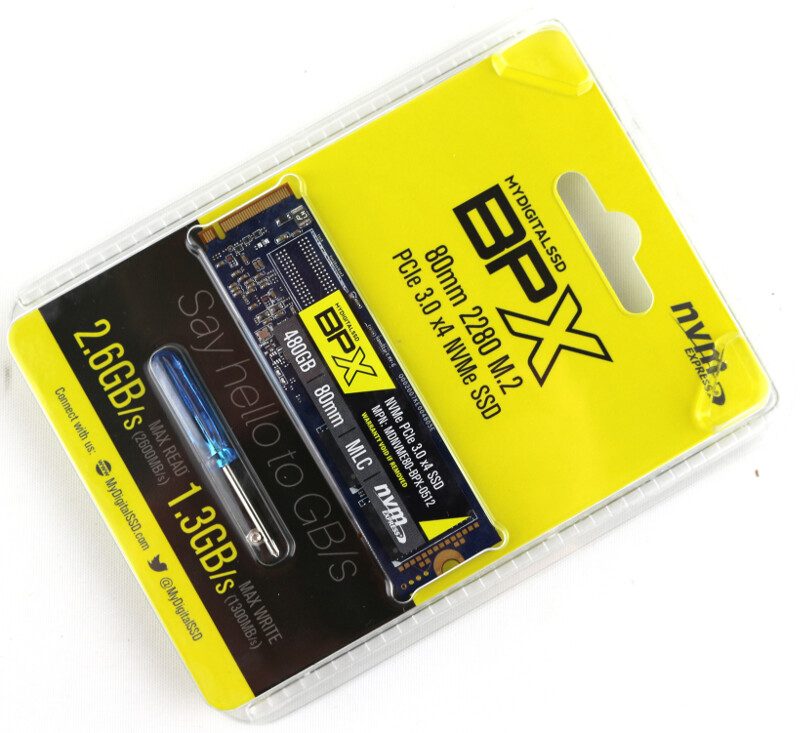 The rear has a viewing hole where the used Phison controller is shown along with one of the memory chips. There’s also a list of features and a small text section introducing the BPX SSD. 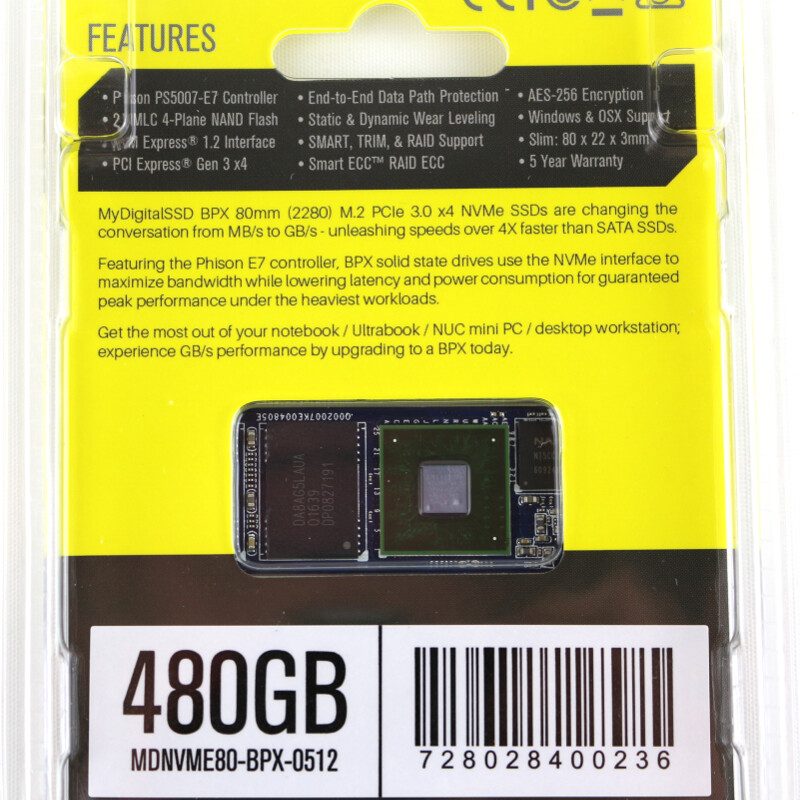 Inside the package are a tiny screwdriver, a screw (should you have lost the one in your motherboard or adapter bracket), and the SSD itself. Everything that you need to say hello to Gigabits per second transfer speeds.