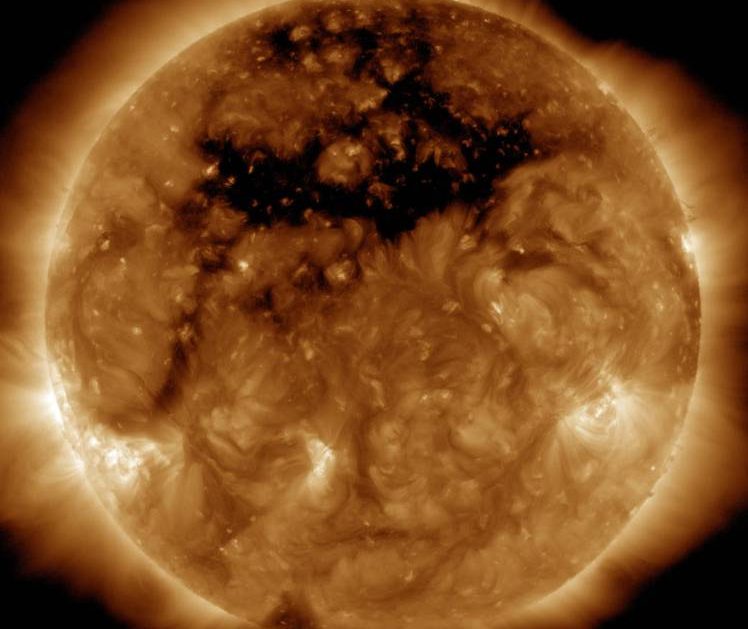 NASA astronomers have discovered a large hole in the corona of our sun, and it’s growing. While the anomaly is not a matter for concern, it does suggest that the sun is set to unleash an impressive solar storm in early 2017; it shouldn’t affect the Earth too much – except maybe for slight interruption of satellite communications, and slight risk to power grids and pipelines – but it will look pretty cool to watching astronomers.

NASA’s Solar Dynamics Observatory (SDO) is tracking the growth of the coronal hole, which is caused by channels of superheated plasma moving quickly from the interior of the sun into space, following the path of its magnetic field as astral body rotates. The combination of the rotation and the streaming plasma causes solar winds. These winds then tend to clash against slow-moving plasma streams, in a phenomenon known as co-rotating interaction regions (CIRs). Average solar winds ‘blow’ at around 1,000,000mph, but the winds driven by coronal holes can reach twice that speed. The collision of this fast wind against slower ones can trigger beautiful flares and auroras.

A minor geomagnetic storm occurred on the surface of the sun on 9th December, with activity expected to grow over the coming weeks. The activity is visible in the video below, courtesy of Discover Magazine’s Tom Yulsman: