Who Needs Smart Tech When We’ve Got Caffeine Wearables! 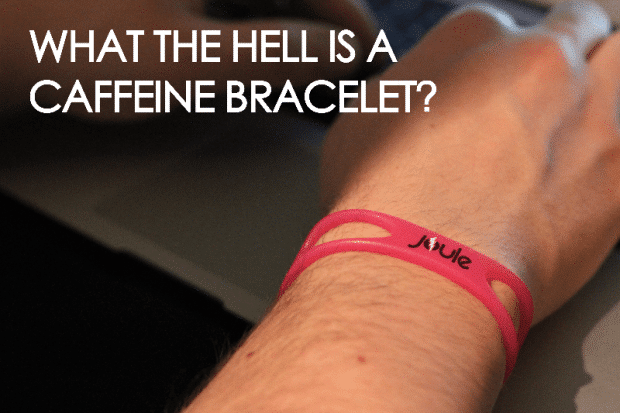 We’ve seen a lot of wearable tech over the years, most of which now comes in the form of a wristband or a smartwatch device that tracks your fitness and general wellbeing, but the Joule is a little bit different. The new wristband aims to combat the issues with wearing adhesive transdermal patches, the types often used for nicotine and caffeine based treatments. The patches can be uncomfortable due to the adhesive used and can certainly cause various skin irritations for the wearer, but what if you could simply wear it on your wrist?

Joule, a simple caffeine wearable, is designed to be more comfortable and puts the patch in a part of the body that has minimal fat resistance and high blood flow, allowing for a more effective treatment. It’s like the anti-hero to the current crop of connected wearables, in fact, it’s a laughably simple idea when you think about it, but one that could help a lot of people none the less.

“Let’s face it, the main reason most of us wait in long lines, put up with stained teeth and bad breath, keep adding to the old spare tire and take in obscene amounts of sugar is to get that wonderful caffeine boost.

Whether it’s a coffee first thing in the morning, or an energy drink before an all-night study session, caffeine is what we want and damn the consequences! When you think about it…how many issues in your life can be traced to having low energy, no energy, mood swings or general lack of alertness? We all want to cram a lot into a narrow window of time, but when energy levels suffer, so does your performance.

Now….imagine if you could get all the positives of your coffee or energy drink with none of the negatives, and actually pay “less” than you do now. Would you be interested?

It’s time to modify the way you deliver caffeine into your bloodstream and discover the Joule Caffeine Bracelet!”

The company recently launched an Indiegogo campaign to raise $15,000  and given that they’re already at $8,000 (correct at time of writing) with a month left, I doubt they’ll be having many issues getting the cash together.

Would this be enough to help you kick your coffee and energy drink habit? Or do you prefer your fix to come in a cup?