Until a few months ago, I had quite a large reservation against the principle of powerline technology and up until this point I was hard fought when it came to recommending it. Thankfully though Netgear was able to change all this with the XAVB5201 kit and since then I’ve been totally converted and I can at last put my trust in the technology.

To move on from the simple principle of wired networking, where else is there to go? well the obvious answer is to eliminate the wires and this then in a way questions why one would want to use a powerline kit. Well in many instances wireless has its downfalls mainly due to signal coverage and speed and this is hence why signal boosters and wireless repeaters are available on the market. Truth be told though, wireless extenders still have their pro’s and con’s, the main one being loss of speed and increased ping. When I looked at Netgear’s WN1000RP, it did great in improving the range of my wireless network, but there was a notable drop in speed at the same time which is something that most repeaters do suffer from in varying degrees.

So this is where Netgear’s powerline WiFi Access point comes into play. Simply put it gives the best of both worlds with a point-to-point wired powerline, but also on the remote end, the plug also houses a wireless module that allows users to connect, well – wirelessly. By having the remote access point connected to the powerline directly, there is – in theory – no major loss in wireless performance. 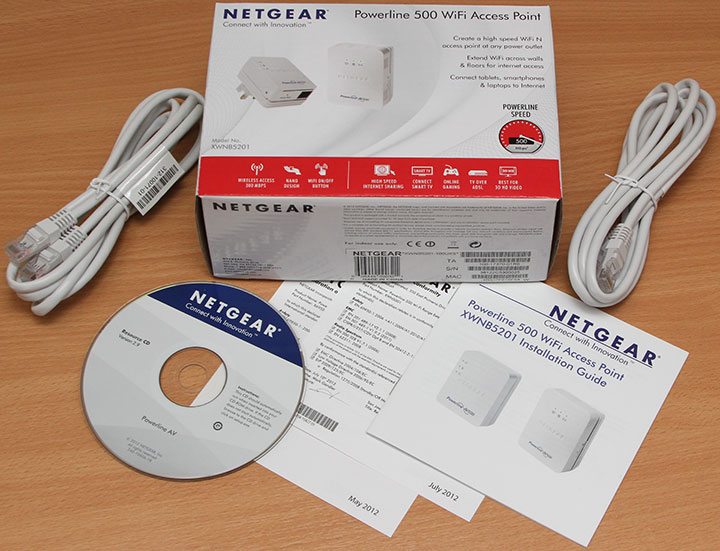 Accompanying the two plugs that make up the powerline kit, Netgear also bundle in a pair of CAT5e patch leads, an installation guide, resource CD and conformity paperwork.