New Chrome Extension Does What Facebook Fails to Do 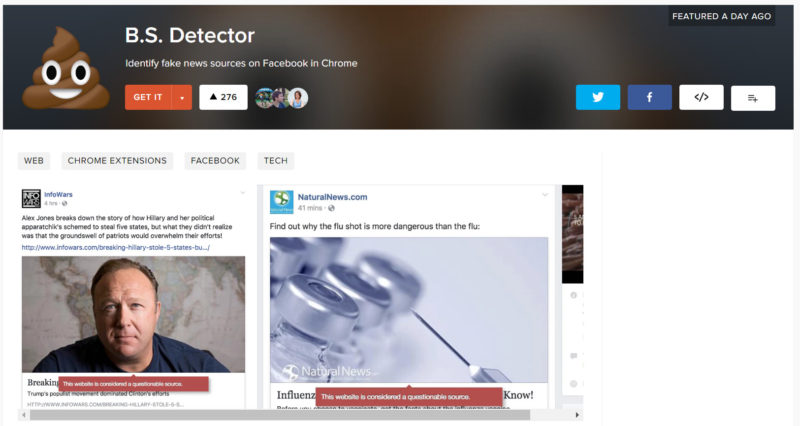 Facebook has been in the news quite a bit lately in regards to fake news stories after they fired all their employees handling that and going back to an automated model – a model that continuously fails. A new Chrome extension has been born out of that and it deals with questionable sources in the right way by just flagging them rather than hiding them. This way, it’s still up to the user whether they want to click and read it while they’re warned about the source at the same time.

The new plugin is called the B.S Detector and it was released yesterday with the intent to identify and flag fake news on Facebook – and it does so in a very simple way. As you scroll down your Facebook feed, the plugin will put an overlay over questionable posts and thus allowing you to make up your mind before you click it. Hopefully, it will also prevent people who aren’t as good as doing research from sharing it and thus prevent fake news from being shared too much in the first place.

The creator of the extension, Daniel Sieradski, simply compiled a list of well-known hoax sites that the extension flags which is a lot smarter than developing an algorithm to warn users about individual articles. He said the sites run across the political spectrum and users can also submit requests to modify those settings on Github.

For now, this is a proof of concept and nothing more, but the author is considering to make it more available and add a feature to directly affect the list for people, allowing them to whitelist or blacklist sites on their own. At the same time, the author also took the opportunity to hit a blow on Marc Zuckerberg and his social network for failing to do the same, calling it a lack of spine to do what is necessary.

“I built this in about an hour yesterday after reading [Mark Zuckerberg’s] BS about not being able to flag fake news sites. Of course you can. It just takes having a spine to call out nonsense,” Sieradski wrote. “This is just a proof of concept at this point, but it works well enough.”

On Monday, Gizmodo reported that Facebook had considered implementing tools that would fight hoaxes on its network, but abandoned the project over a fear of appearing politically biased. Facebook denied that claim. Either way, the new tool could be very useful and it can be found here.