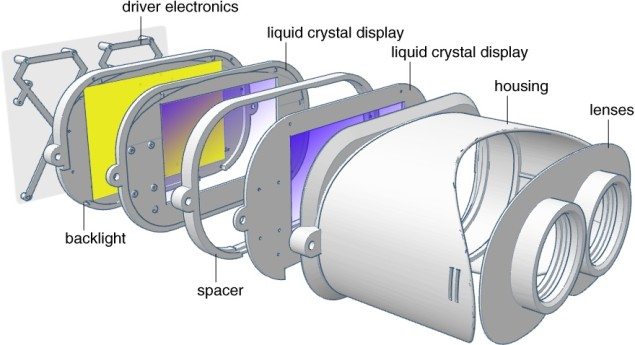 Nvidia has been fairly quiet on the VR front, allowing the Oculus Rift to take most of the limelight. However, they haven’t been doing nothing, Nvidia’s boffins have been working away with Stanford University to develop a new technology. The new tech has a catchy name of NE-LF. This stands for Near Eye Light Field. The system proposes to eliminate all forms of motion sickness caused by traditional virtual reality headsets. The system works by utilising 4D (2d+2d) images. These are displayed to both eyes that then combine to form a single 3D image; Fudzilla believes that the new tech will be available by 2018.

The problem with current VR systems is that when viewing objects close to the virtual camera, some people experience motion sickness. This in turn limits the amount of time you spend using the device as you may find that you feel rather ill, rather quickly. The last thing you want to do is vomit on your nice, shiny VR headset! The system uses two layers of display, with about 5mm of distance between the two panels. This then sends the eye an entire “4d” field of images so the eye can naturally focus between two objects.  The only downside is that because of the early adoption, the resolution works out at 640 X 800 per eye, not a useable resolution for gaming or any modern application.

I do find the VR headsets rather cool, and love the Oculus Rift ( I’ve even had a go with one!). However other VR vendors may solve the motion sickness problem by the time NE-LF hits the market, I guess we will see.