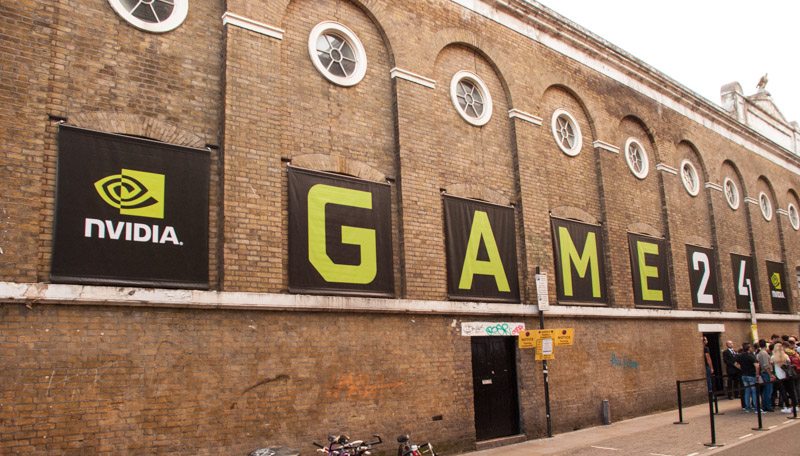 To celebrate the launch of their brand new GTX 970 and GTX 980 Maxwell graphics cards Nvidia hosted a global event called “Game24”. Game24 started on September 18th at 6pm PDT (Pacific Daylight Time) in Los Angeles and ended 24 hours later. The idea behind the Game24 event is to be a global celebration of PC gaming and so Nvidia hosted parties at 7 major cities across the world where they gave away free Nvidia goodies, showed fans some of the latest PC gaming titles and gave demonstrations of things Nvidia are doing for PC gaming. We went along to a Game24 event to see what all the fuss was about. 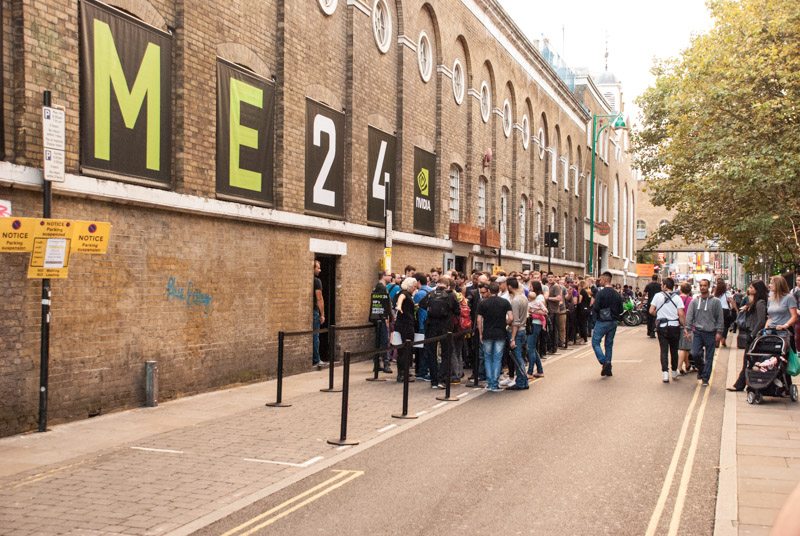 During that 24 hour period each of 7 cities got their opportunity to have some of the limelight and host the event for a few hours. London, Los Angeles, Sao Paulo, Shanghai, Stockholm, Taipei and Tokyo all took part. Being a London-based journalist I took the time to head on down to the Nvidia Game24 London event. Nvidia’s venue was pretty hard to miss as they had taken over the Old Truman Brewery situated at 91 on London’s infamous Brick Lane. We turned up at 6:30pm and the queue was pretty hard to miss: a lot of dedicated gamers had arrived for the show. Interestingly, I couldn’t see many people in AMD Red, it seemed that AMD’s PR campaign to get people to where red actually resulted in less people wearing red than normal. Typically I’d expect to find quite a few people wearing red just as a random variation of clothing choice but honestly I could see less than 10 people during the whole night who wore red clothing. 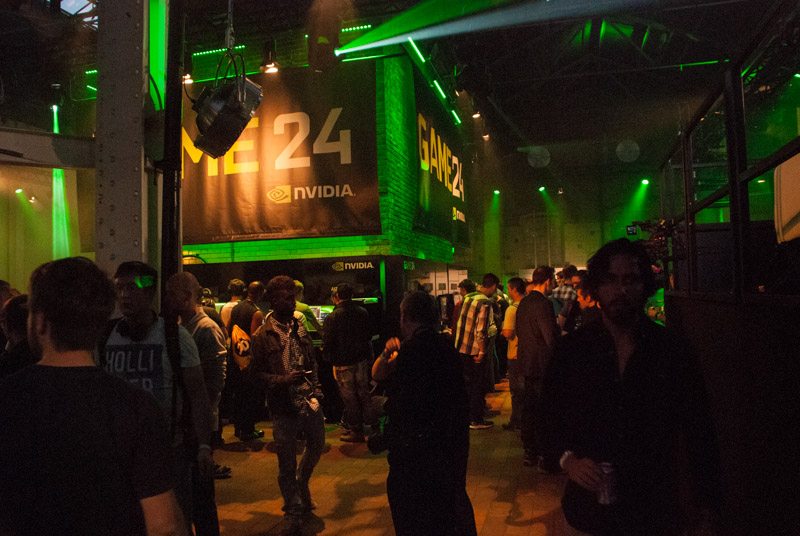 Upon entering the venue it felt a little like a nerdy night club but the most obvious thing that struck you was that “wow this is busy!”. Gamers had turned up in significant numbers to what was only a fairly small venue and event. 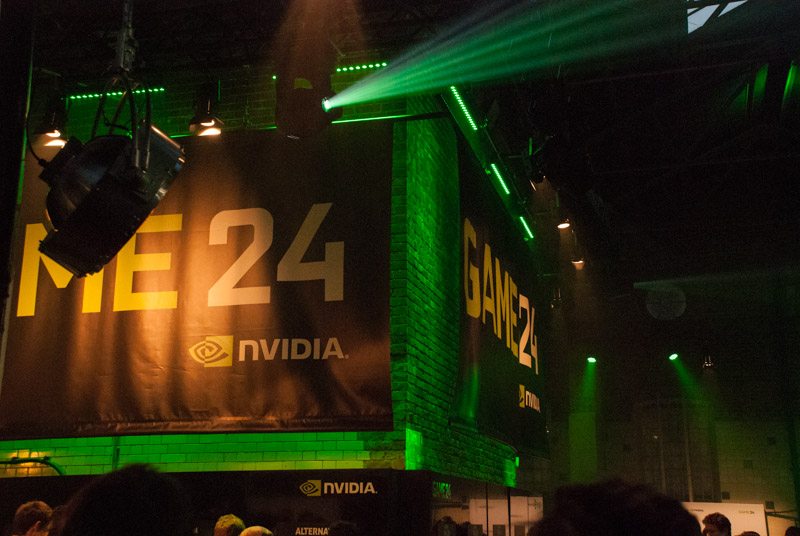 Nvidia didn’t waste any opportunities to put their branding up over every bit of available wall space, I’d imagine most people left this event with a sudden urge to buy an Nvidia graphics card! 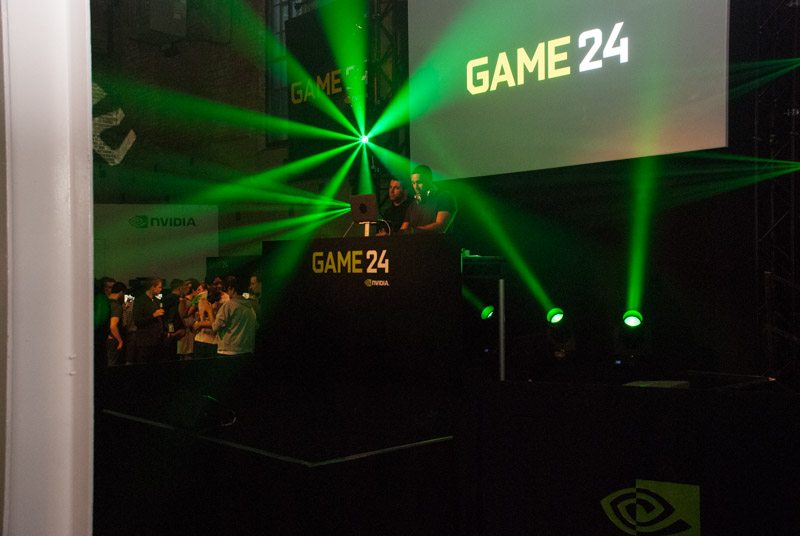 At the centre stage Nvidia had brought in a DJ and put up a massive screen. Throughout the night they did some giveaways here chucking freebies into the excited crowd. Towards the end they also gave away a Nvidia Shield Tablet to one lucky winner. 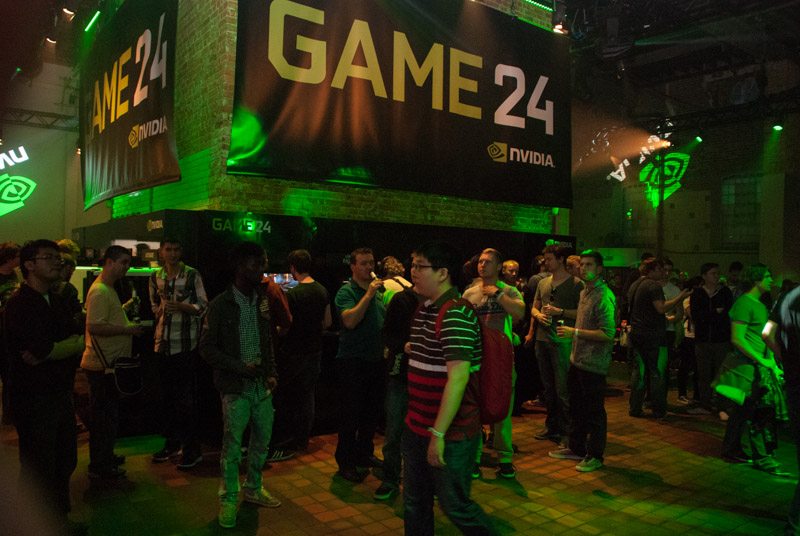 It wouldn’t be a Game24 event without some games right? Dotted around each corner of the room were booths where Gamers had a chance to play around on some current gaming titles. 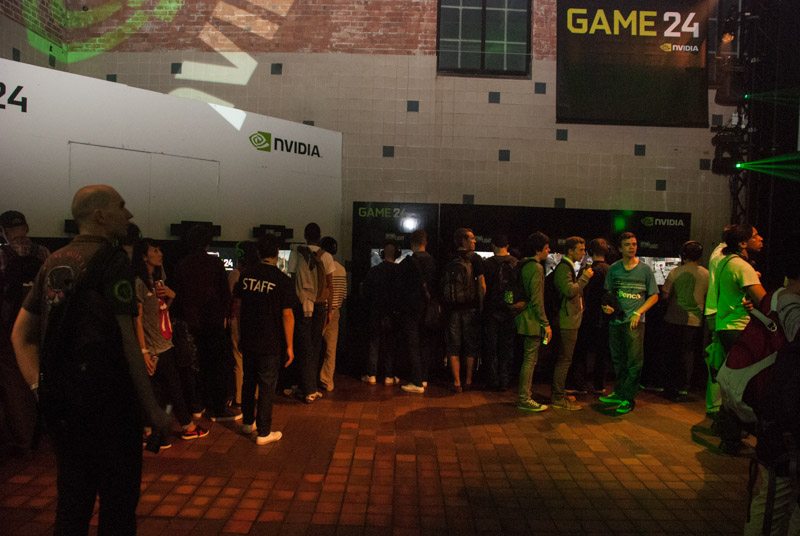 One of those was the hugely popular World of Tanks MMO where the PCs were running it with all the settings cranked up to the max on Nvidia graphics cards, of course. 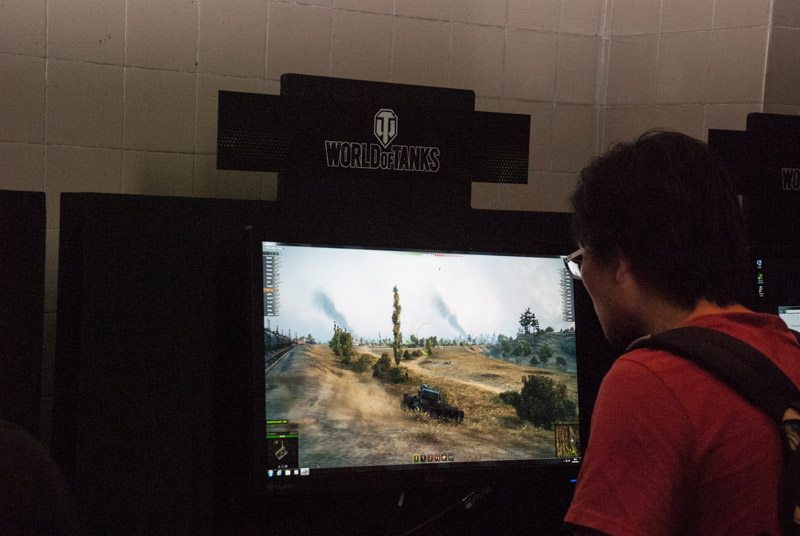 Another one of the booth areas was running Dying Light which is a first-person action survival horror game. Most of the Gamers on these booths seemed to stick around for a bit longer than most and given the great visuals I’m not surprised. 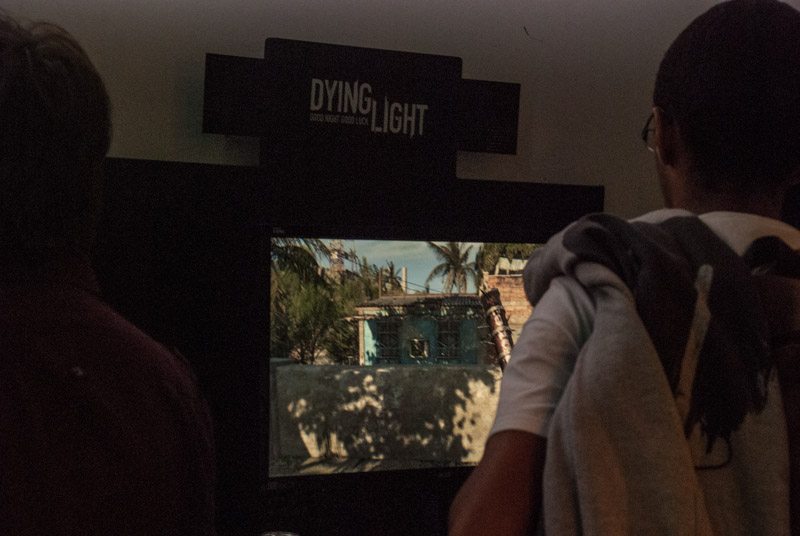 The overall event had significant support from Nvidia’s partners. Names on the support list that stand out to me include ASUS, Gigabyte, MSI, Overclockers and PC Specialist – brands we’ve worked closely with on numerous occasions. 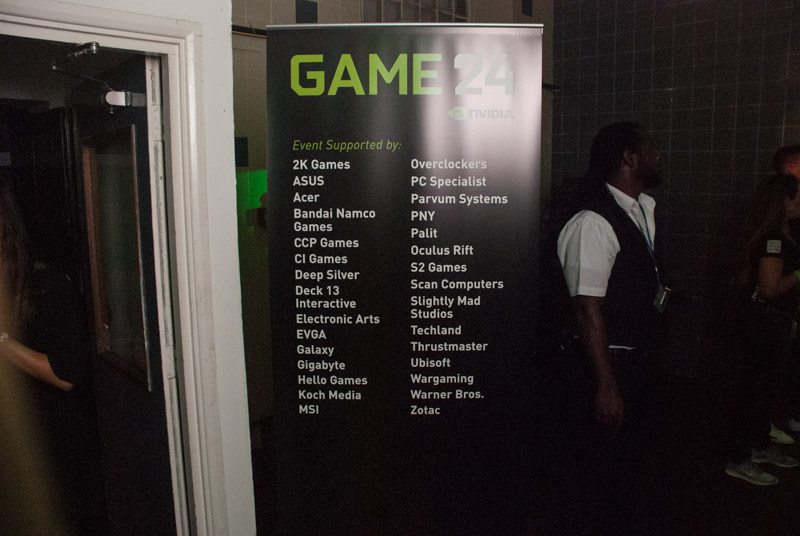 At one of the two entrances a custom-built Parvum Systems machine greeted Gamers. There weren’t any specifications on display here but we can see it was using a Gigabyte Z97MX-Gaming 5 motherboard with an Intel Core CPU (probably the Core i7 4790K), a Corsair H80i and Nvidia’s latest Maxwell GTX 980 graphics card. 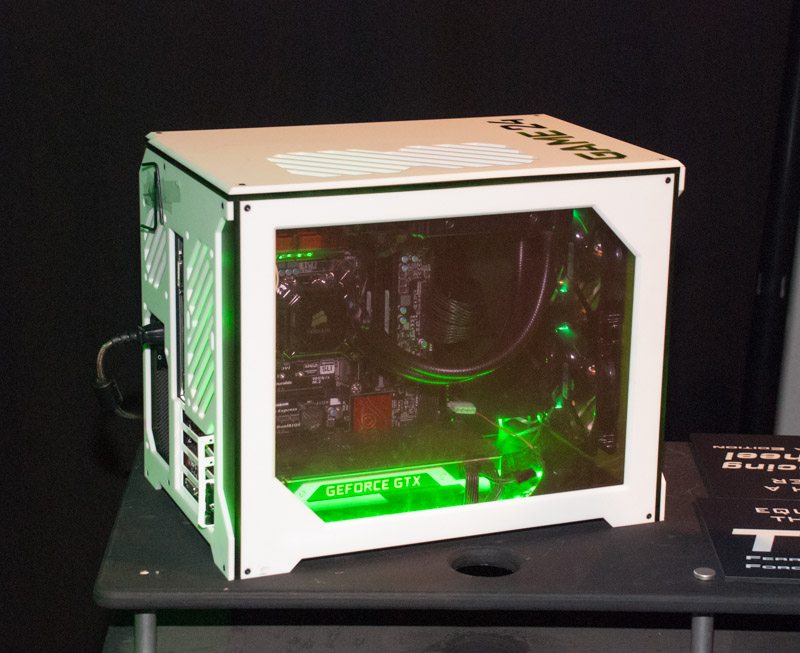 Moving around to another booth and we found systems running the latest Metro title, Redux. These systems were kitted out with pretty significant hardware because as everyone knows the Metro series of games are not kind to your graphics cards! 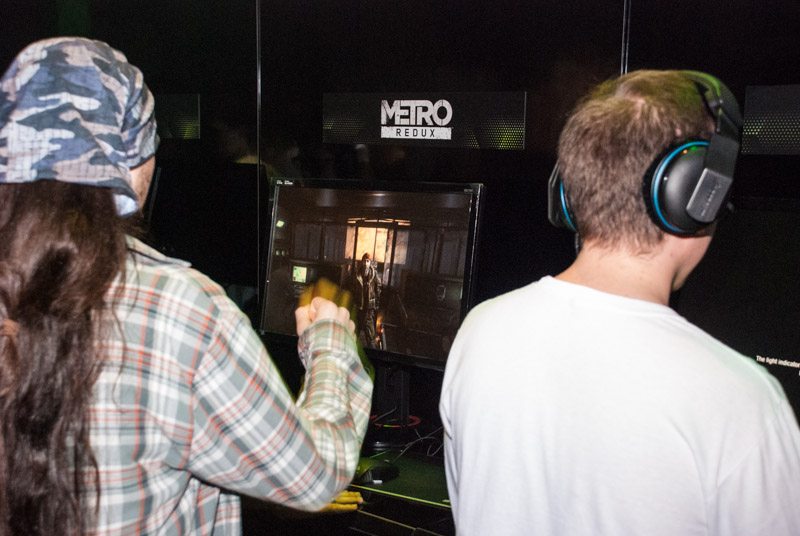 Nvidia may be big on PC Gaming but let’s not forgot the Shield Tablet. While this is primarily geared as an Android gaming platform you can stream PC games to it from your PC using Nvidia’s GameStream technology. 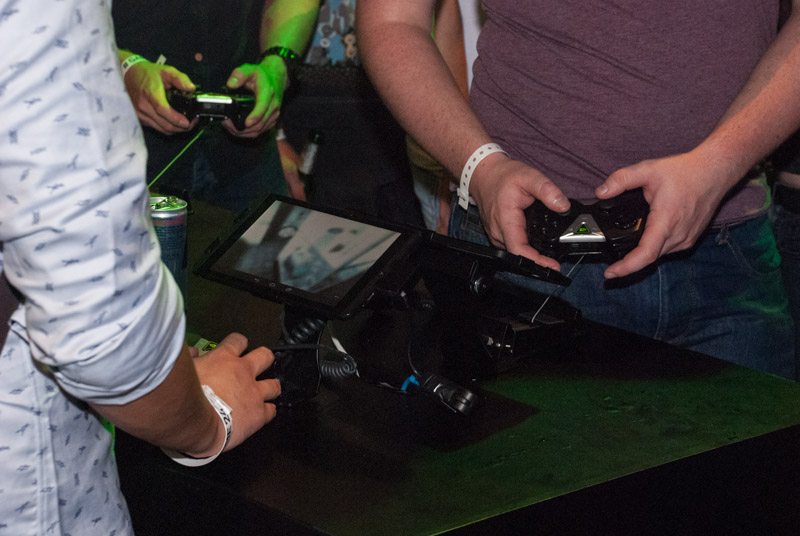 Nvidia’s G-Sync is one of the main reasons why they changed the display output configuration of their Maxwell GPUs. For those who don’t know, the GTX 980 offers three DisplayPort outputs because each G-Sync monitor needs a DisplayPort output. If you want to run G-Sync surround you therefore need three DisplayPorts. At Game24 London there was a G-Sync demo on offer for passing Gamers to give them a visual representation of what G-Sync does. The strange thing about G-Sync is that you have to see it in person to experience it, you can’t really benchmark or record it.

Nvidia were also giving other tech demos of new features with their Maxwell GPUs such as VXGI (Voxel Global Illumination), DSR (Dynamic Super Resolution) and MFAA (Multi-Frame Sampled AA). We wrote more about these new features in our GTX 980 review which you can see here. 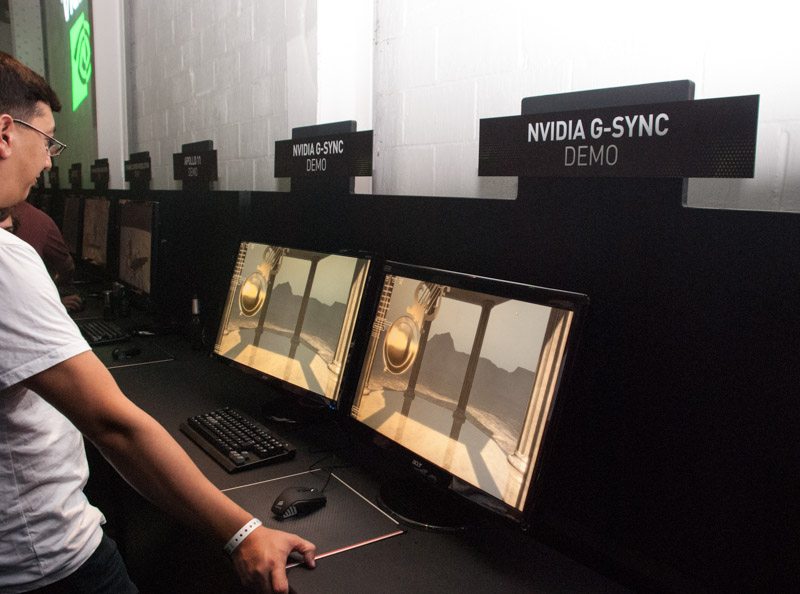 On a large screen we found a ‘Scan Computers‘ systems running Project Cars, this was one of the most popular games on offer with a huge queue to have a go at it. 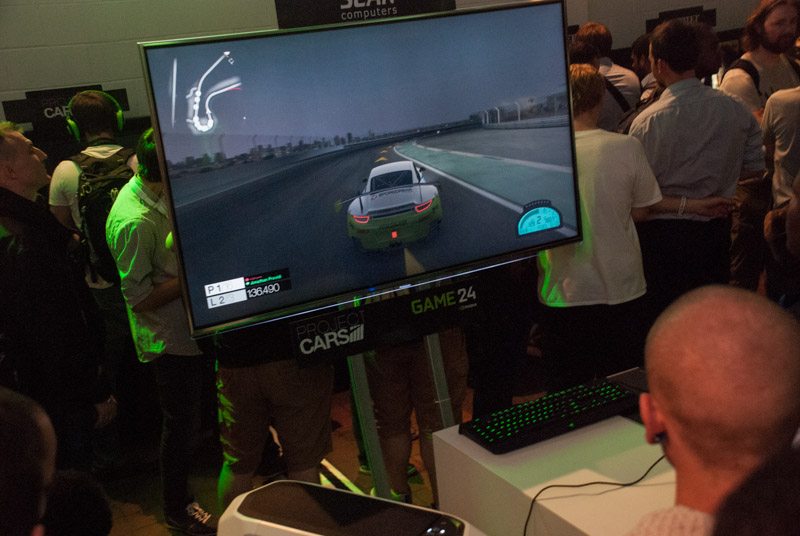 The system that was driving Project Cars on the big screen was equally as impressive as the game itself: Tri-SLI GTX 980 graphics cards on an ASUS ROG Rampage V Extreme with an Intel Core i7 5960X and some quad channel DDR4 memory. 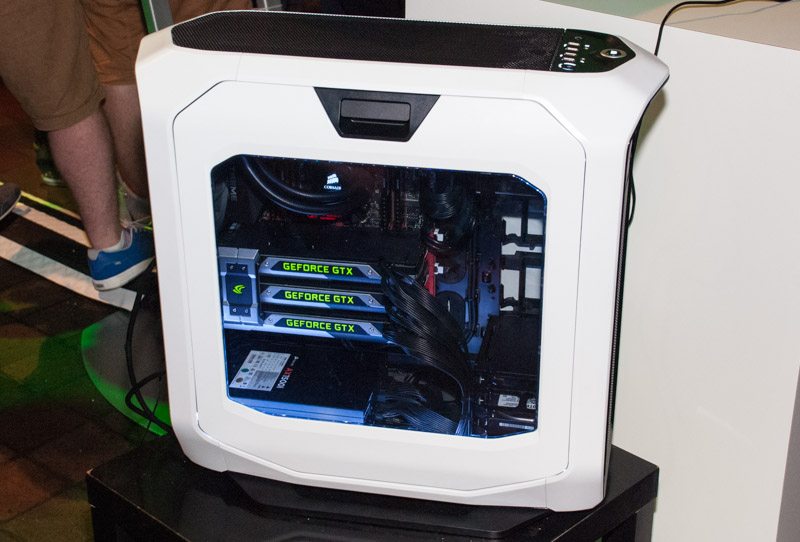 Two of our favoured system builders Overclockers UK and PC Specialist also had some systems there. 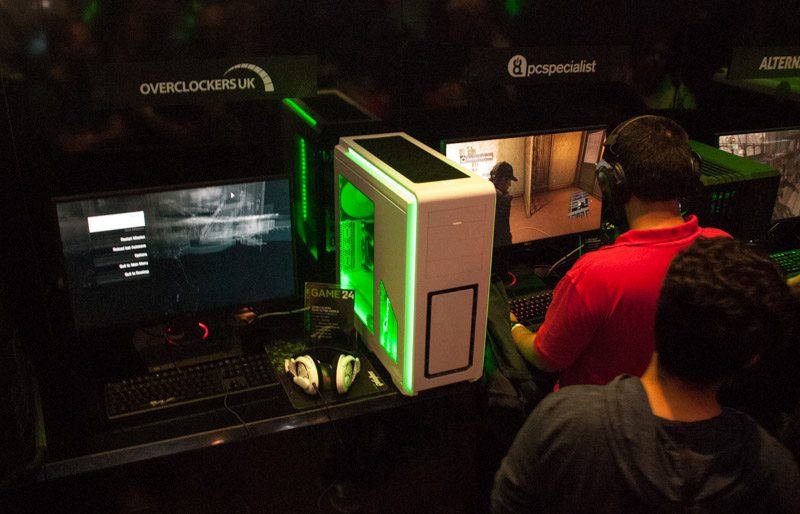 The PC Specialist system was running two GTX 980s in SLI, an ASUS Rampage V Extreme motherboard with an 8 core i7 5960X CPU and 16GB of Kingston’s high performance HyperX Predator 3000MHz memory. That was all housed in a Corsair Carbide Air 540 chassis. 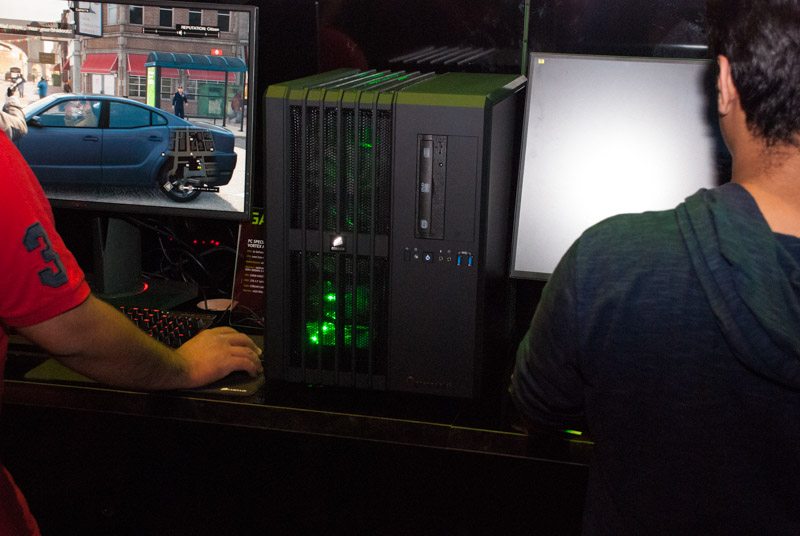 Overclockers UK had an equally impressive system sporting two GTX 980s in SLI, an ASUS X99 Deluxe motherboard, an Intel Core i7 5960X CPU and 16GB of Corsair’s premium Dominator Platinum memory. This was all housed inside Phantek’s Enthoo Primo White Edition case. From what I can tell this system was running a single player demo of Watchdogs. 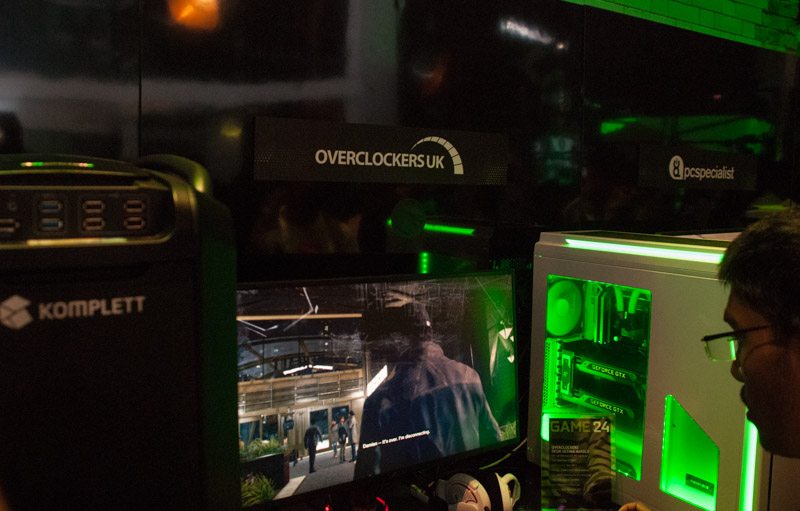 The final noteworthy part of the night was Nvidia’s goodie bag giveaways at the end. Every gamer who attended received an Nvidia T-Shirt, mousemat and lanyard. Okay so it isn’t the best bundle in the world but remember this was a free-entry event for everyone that attended. 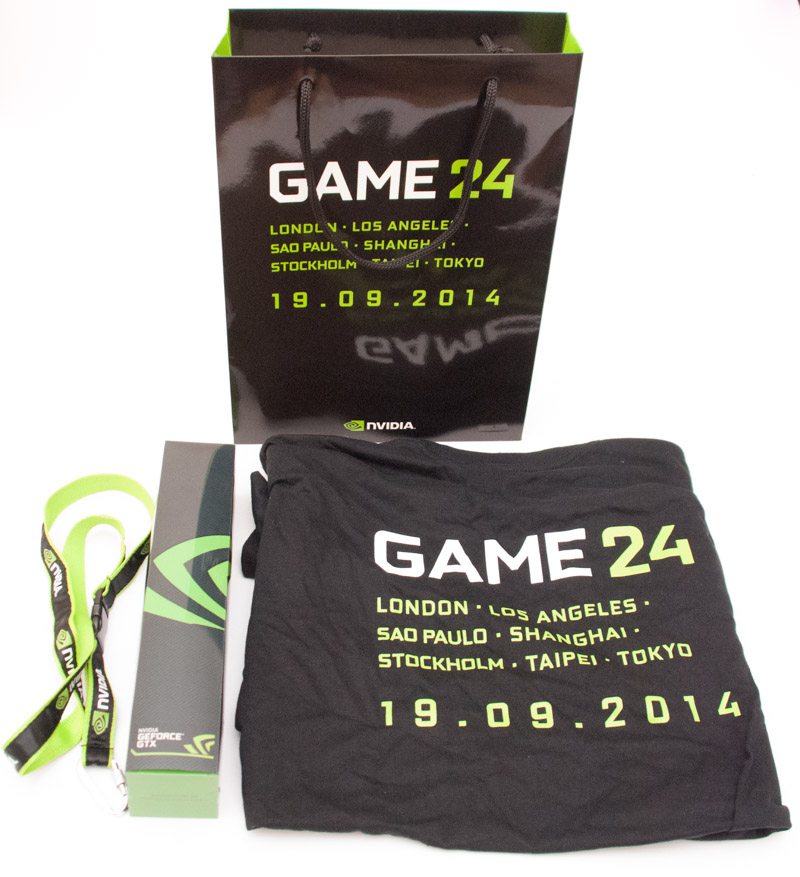 Did you get a chance to make it along to Game24 London? If so, what did you think of it?