Since I have been reviewing SSDs, there is one particular brand that as been at the forefront of my testing and who are always willing to send me the latest revision of their most popular drives. This is of course OCZ and since I took a look at the Vertex 3 nearly two years ago, I’ve seen a number of Vertex drives since. One of these drives that I looked at – namely the Vertex 3 Max IOPS 120GB is one that I still use to this day in my laptop for rendering work when out and about at events and its not skipped a beat on me once – proof that the drives are highly reliable in the long run!

Moving forward to today, the advances in SSD technology as we know are moving quicker than ever and drives are no pouring out of factories quicker that we would have imagined just a few years ago, but the big names in the SSD market are all trying to keep the users on their side by re-kindling and improving on their known product lines in order to try and keep the upper hand.

The Vertex line of drives as highlighted above is again seeing another update and a fresher look at the same time, hoping to keep it as one of the more popular drives in the SSD market. The most recent update that we saw from OCZ was with the slightly older Vertex 3, whilst the Vertex 4 is the more recent of these two drives, the V3 was a huge seller and with the move over to 20nm NAND, the creation of the Vertex 3.20 was made with scope that users of the Vertex 3 would see the update and move across to the better performing drive.

The other key element of the Vertex drives is value. In a market where competition is fierce, being able to bring top level performance down to mainstream prices is a huge factor in sales and this is what the new Vertex 450 is primarily aimed for. Since the acquisition of Indilinx, OCZ have been fitting their own proprietary controllers to their drives reducing the overall cost of the drives, which as we know is great news for the end user. The BF3-M10 controller that we see in use in the 450 is a slightly cut back version of that used on the Vector. Whilst it has a slightly lower clock speed, its clock generator has been optimised for performance and with the teaming of some 20nm NAND, OCZ have built the drive with Vector like specifications – but at a lower cost.

Unlike the Vertex 3.20 which saw a change to the standard OCZ packaging – a blister pack of all things – the 450 sees the return of the ‘standard’ OCZ outfit, with a 2.5″ to 3.52 drive bay adaptor, fitting screws and a copy of Acromis True Image for cloning the contents of your current drive to this with ease. 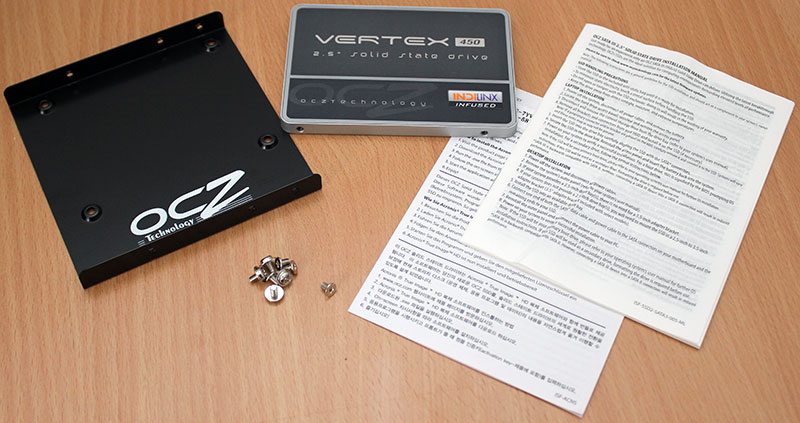