Owners iMac Has A Literal Bug In The Machine 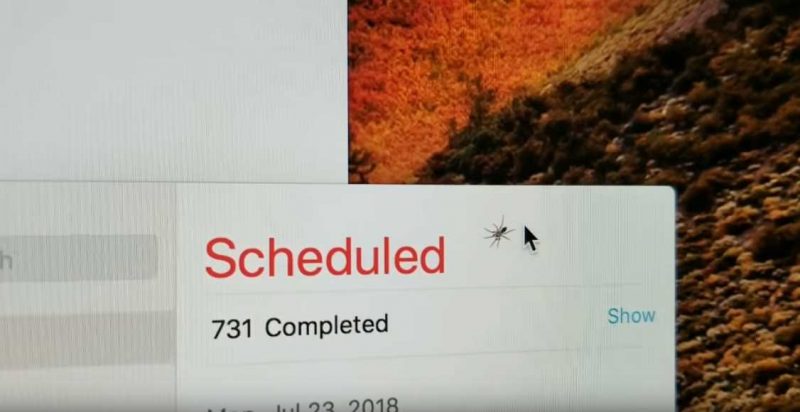 Owners iMac Has A Literal Bug In The Machine

There’s nothing worse than having a bug in the machine with your computer. You have to diagnose the problem, read about 40 unhelpful posts on Google (of which 80% are ‘me too’) and maybe even finally have to swallow your pride and let somebody who knows about computers to have a look for you.

There are, of course, worse exceptions. Such as having a literal bug in the machine! One person has experienced that exact nightmare. In a video posted on YouTube, use Timothy Buchanan has shown us a spider that has somehow managed to penetrate his system.

Kill It With Fire!

Now, I, like many of you, are probably not too fond of spiders. If I found one in my PC though, I think I’d have a massive dilemma. I couldn’t exactly whomp it with my shoe nor could I purge it with fire. In the video though, this particular spider has somehow managed to get onto his screen.

Initially, the did consider the possibility that this might have been had been a screen companion. You know, like that Dogz or Catz game offered in the mid-90’s or for the naughty ones amongst you, a scantily clad young lady. From moving the windows around though, the spider does appear to be entirely legitimate and worse, he even moves around!

How Did It Get There?

It probably snuck in through a vent, but exactly how it got in front of the monitor but behind the screen is a bit of a mystery. It isn’t going to be easy to remove him either given Apple’s tendency to make their technology near impenetrable. I’m glad it’s not my problem!

I suppose it could be worse though. It could’ve been the Office Paperclip!

What do you think? Real or fake? – Let us know in the comments!