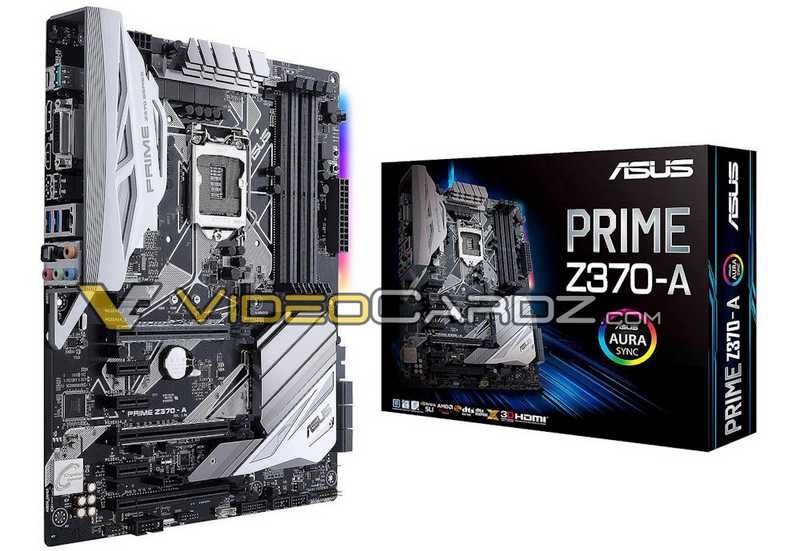 After a user in Vietnam showed his own ASUS Z370-I mini-ITX motherboard yesterday, which looks remarkably just like the Z270 version. Many are wondering if the rest of ASUS line will simply inherit the same Z270 designs. Luckily, VideoCardz.com has the scoop and has posted the promotional photos for much of ASUS’ upcoming Z370 line. This includes the PRIME series, TUF Gaming and ROG Strix boards.

Almost every motherboard seems to be a gaming motherboard now, even this TUF series board. Unlike the older models which had a very distinct military brown look, the new Z370 TUF uses gray with yellow accent on black. It does not have any fancy armor covering, besides the IO cover which appears to extend further into the leftside VRM heatisnk. The board is ready for SLI having a sizable two-slot gap between the topmost and the next PCIe 16x slot.

It has two M.2 slots, with the one at the bottom supporting 22110 form factors. There are six SATA ports, two of which are upright and at the bottom edge along with the onboard headers. The remaining four are angled and are not stacked on top of one another which is atypical. 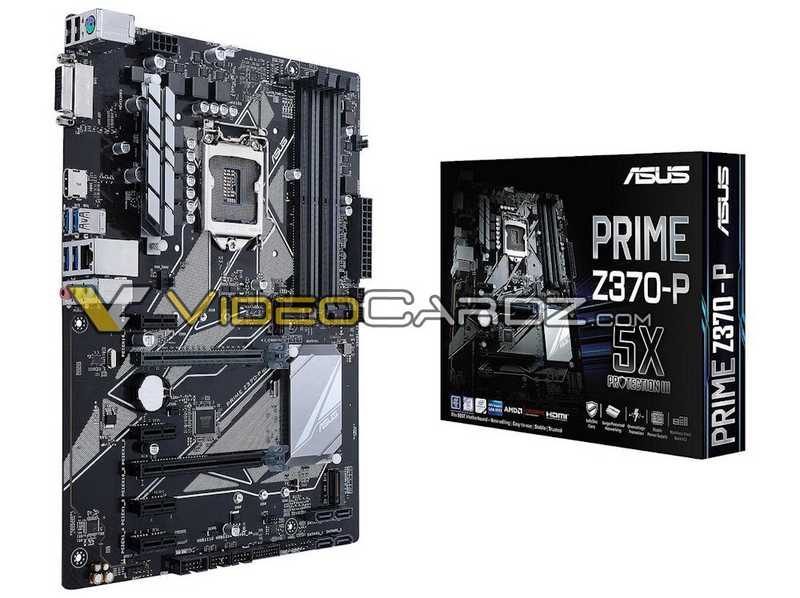 The Z370-P seems to be towards the lower end of the series, having a seemingly bare layout in comparison to the rest. Only the CPU MOSFETs have a heatsink, and the rest of the VRM at the top are exposed. Even the rear IO is quite bare, with only four USB 3.0 ports, two USB 2.0 ports, and a three 3.5mm analog jack port for audio. An HDMI and a DVI-D port is available for external display.

All the SATA ports are also upright and there are only four of them instead of the standard six. There are two M.2 slots available however. One is right beside the topmost PCIe x1 slot and one is right below the chipset heatsink. As is common with entry level boards, all the heatsinks use spring-loaded pushpins instead of screws. The box is also absent any SLI logo so it is possible that only AMD video cards can run dual video cards on this.

The PRIME Z370-A definitely is more high end than the Z370-P. Maybe “P” stands for pathetic? The only thing the Z370-A and the Z370-P have in common is the color scheme and PCB printing pattern. Just the rear IO alone has a lot more connector options. The display output for the integrated graphics for instance has a DVI-D port, an HDMI port and a full-size DisplayPort. There are two USB 3.0 ports, two USB 2.0 ports and two USB 3.1 ports. One is a Type-A and another is a Type-C. It is also safe to assume that these are USB 3.1 Gen 2 ports.

There are two M.2 slots available, although the one at the bottom has an integrated heatsink with the chipset. The PRIME Z370-A also has all six standard SATA ports at an angle. Plus, there are on-board buttons for power and reset to the side above the 24-pin power connector. The side area also has Aura Sync RGB LED built in. 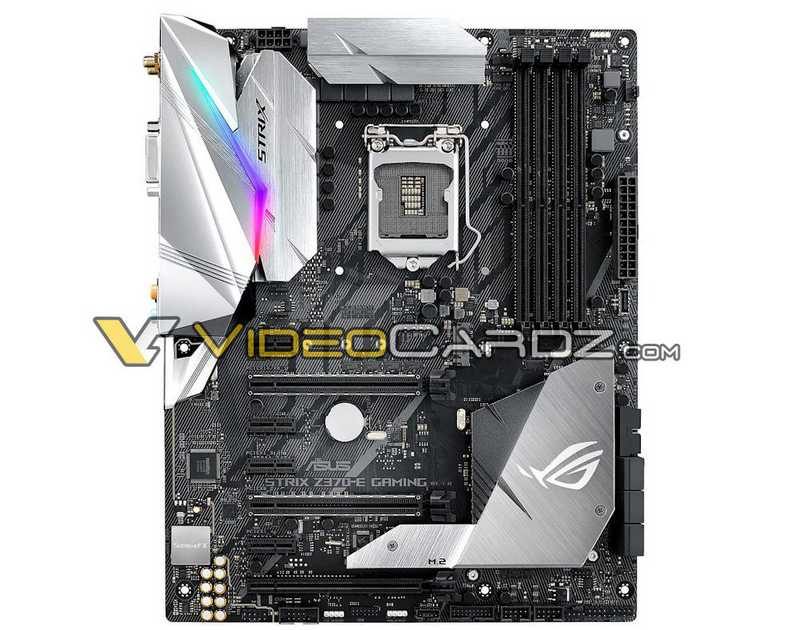 For the ROG Strix line, the Z370-E Gaming has a similar chipset+M.2 all-in-one heatsink going on. Although the pattern is of brushed metal and more industrial looking than the PRIME Z370-A. The layout appears very similar to the Z370-A as well except there is an on-board USB 3.1 header available below the 24-pin connector. There are also no on-board buttons available. But there is Wi-Fi built-in on the rear IO area. 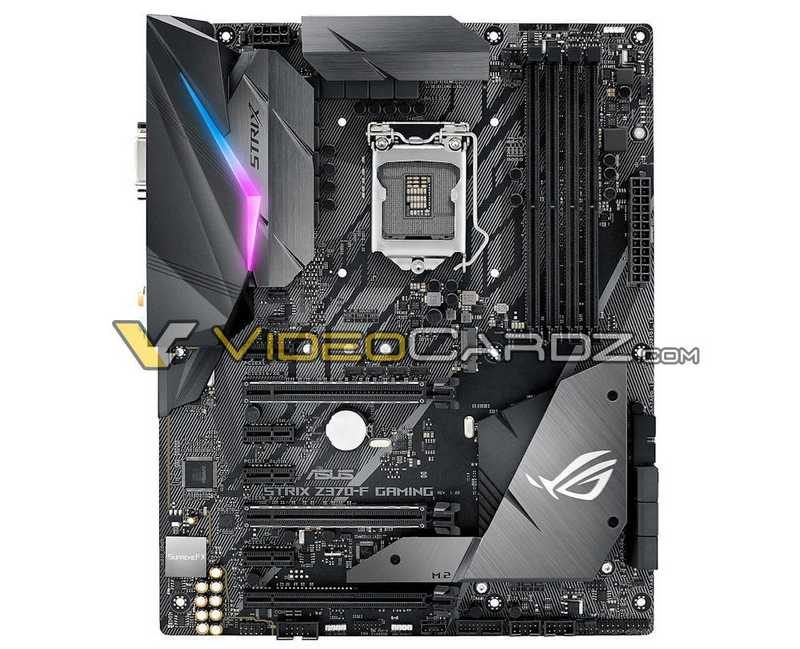 The RoG Strix Z370-F is darker than the Z370-E, and it has less features. The Wi-Fi and USB 3.1 onboard are gone, although much of the layout remains the same. It even has the RGB LED IO cover and three RGB LED headers onboard. 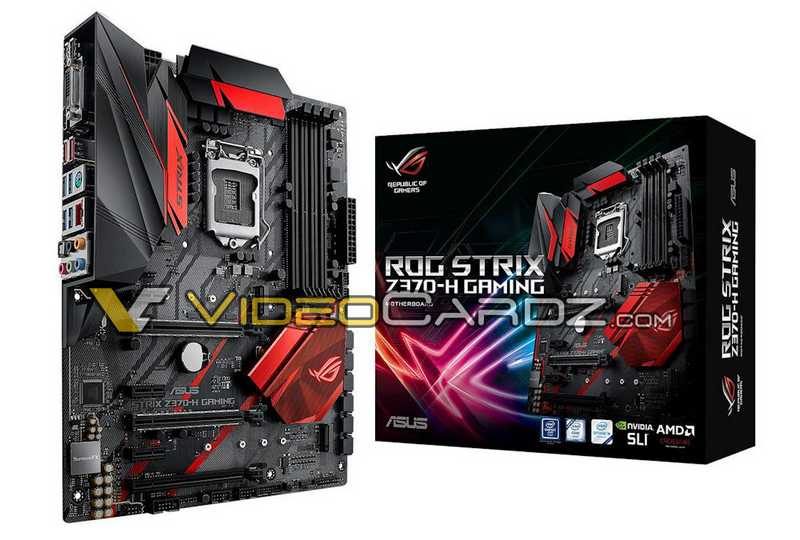 The ROG Strix Z370-H Gaming looks a lot different than both the Z370-F and Z370-E. It has a darker base, but has red accents all over. It also drops the integrated M.2+PCH heatsink combo and unstacks the SATA ports. All six ports are angled and flat across almost half of the bottom part edge. It still has two M.2 slots with 22110 support at the bottom however. It also lacks one PCIe x1 slot below the PCIe x16. However, it is still very SLI-aware with the gap before the next PCIe x16 slot starts. 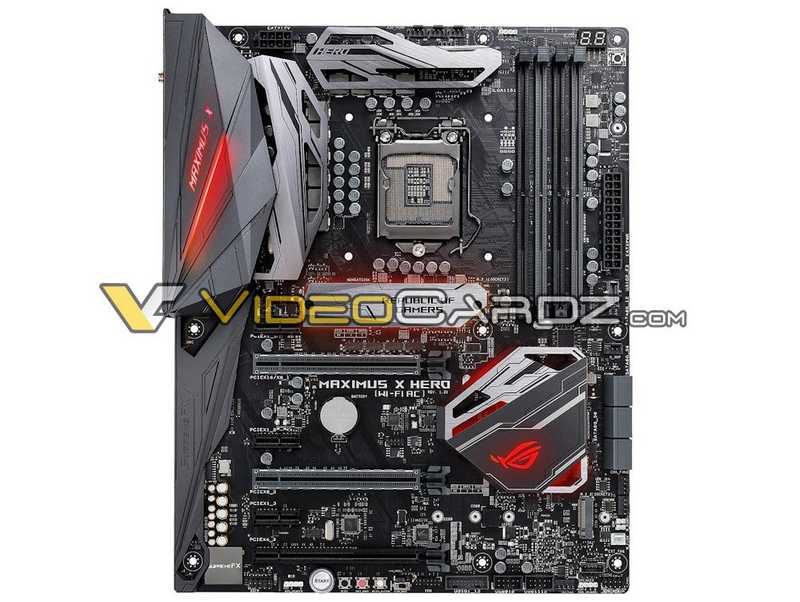 Unlike the RoG Strix boards, the Maximus X Hero is a real Republic of Gamers motherboard. It inherits much of the same design as the Maximus IX series and has plenty of OC features available. The on-board buttons are along the bottom edge, having a power button, reset, CMOS clear and shortcut to UEFI. This board also boasts built-in 802.11AC Wi-Fi, onboard USB 3.1 header, and has plenty of fan headers on-board.