Camera technology is definitely taking significant steps forward. While some are worried that this might be intrusive, it’s hard to deny the potential for better cameras could have. A sensible implementation may be the answer to this and few would argue with police cars having good technology.

Coban, a technology company specialising in cameras for the police, claims to have taken this development a significant step further reports CNN. Whether Donald Trump considers this fake news or not remains to be seen.

The camera has been specifically designed with AI implemented to help the police in their job. Some of the features are genuine, if working, very impressive.

The camera has been programmed with AI that actively scans the environment. Based on this, it reportedly can help it identify the following:

This clear could help the police perform more effectively. The technology is currently being tested in the US and if successful, will doubtlessly be rolled out internationally.

SGT Daniel Gomez, who is head of the Los Angeles Police Departments tactical technology section has said: “There’s no doubt there’s value. We want to be on that journey with them to understand where they’re going to go, and what they’re going to do.”

How quickly we’ll see this technology in the UK is a little unclear. A recent report highlighted the somewhat disturbing fact that a significant portion of the UK’s police force still uses Windows XP. That’s comforting to know, isn’t it!

In addition, it is no secret that at present very few police cars in the UK are even equipped with ANPR technology. With restricted budgets, the price is almost certain to be a factor in this.

What do you think? A good idea if the price is right? Do you think this further impedes on civil rights? Let us know in the comments! 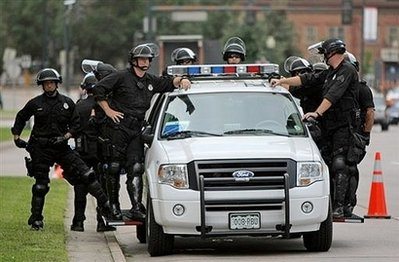