PowerColor announce a Devil 13 edition of the HD 6970 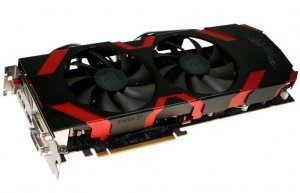 PowerColor, aka TUL Corporation, has recently announced a new edition of the HD 6970, and after Deepcool’s vampire-named cooler, PowerColor is joining a starting ‘trend’ with the Devil 13 HD 6970.

From the ground up, this version is designed to fulfil today’s most demanding HD titles, although you will find the Devil 13 to feature a clock speed of no other than the reference settings, meaning a 880 MHz core speed and 1375 MHz memory speed…

However, PowerColor have also thought of making it better by adding an overclocking switch to provide up to 10% increase in frequency, raising the bar to a 960 MHz of clock speed and 1425 MHz of memory speed, allowing a nice increase in performance to boost the gaming quality.

To support this boost, the Devil 13 had to be built solidly, which is exactly what has been done, with a 12 phase design, direct FET, high current power beat and proadlizer, all these will allow better performance while minimizing the conduction losses as well as the temperature increase.

PowerColor has also incorporated voltage measurement points on the card to give the overclockers with more expertise an easy way to check on consumption.

The stability is also ensured by the cooling, taken care of by four 8mm heat-pipes connected on one side to a copper base fully covering the GPU and on the other to a heatsink covered by two large 92mm fans designed to provide 60% better airflow than the 80mm standard while keeping the noise down for quiet operation.

Equipped with 2GB of GDDR5 memory over a 256-bit bandwidth, the Devil 13 sports the latest in video technology with Second Generation DirectX11 support as well as HD3D to provide quality image with the 3D effects as well as compatibility for Eyefinity with a setup of maximum four displays to widen the field of view of the gamer. 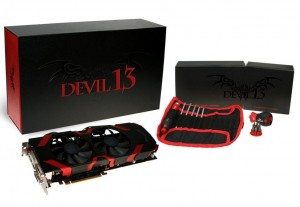 The included accessories look very promising as well, with a couple of tools included, it should please some buyers. Moreover, the card has also been fitted with LEDs showing the status of the card.

Not information about price and availability have been released yet.