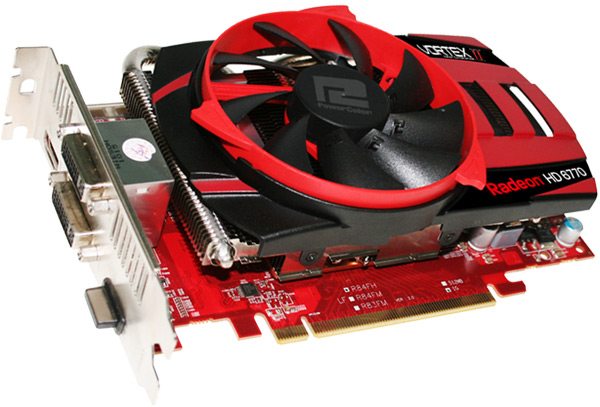 Rewinding time to a few years ago, the Radeon 5770 took centre stage and gave AMD a great boost in sales as it took the market by storm as an affordable mid-range card that had a lot to offer for a great price point. Building on the success of that card, AMD released the next generation in the form of a 6770 offering up slightly improved features and expecting to take the market by storm in the same manner.

With Nvidia releasing the likes of the GTX 550 Ti, it was going to be a lot tougher for AMD to compete, especially at a reference level. This is why many more manufacturers on the market are investing time and money into custom coolers, custom PCB’s and faster pre-overclocked cards and PowerColor thought they’d give some of their star treatment to the Radeon 6770 by slapping their patented Vortex II cooler on board and bumping up the base clocks slightly to give that extra performance that we all crave, especially when it doesn’t cost any extra, right?

We’ve never been fans of mid-range cards, but that’s all down to the fact that the staff at eTeknix are enthusiasts through and through, but we do believe that mid-range cards have their place in the market, as not everyone has £400+ to spend on a dual GPU monster like the Radeon 6990 or GTX 590, and for the most part, cards like that would be wasted on most consumers. This is why we find manufacturers releasing these refreshed cards which give the consumer something more than your bog standard reference card.

PowerColor are keen to show off their Radeon 6770 PCS+ Vortex II graphics card, and with PowerColor being a new brand to us in the test lab, we’re keen to see what it can do and if it’s really worth the extra money for a pre-overclocked card with a fancy cooler.