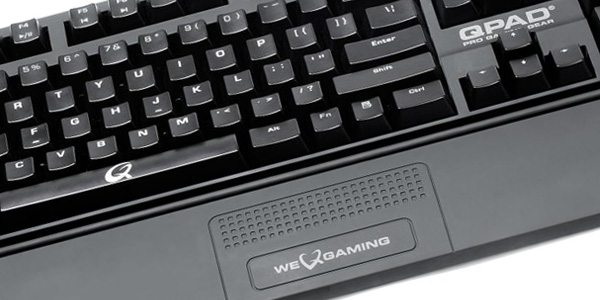 QPad is a relatively small gaming brand when it comes to peripherals, however this hasn’t effected the quality of any of the products they have released, whose range include; mouse pads, gaming mice, headsets and keyboards. QPad’s commitments lie with the gaming community so as such, they sponsor several events and even run their own “Q Tour”. They say the knowledge they have gained from these events have enabled them to create great gaming peripherals, which give the users the winning edge.

What we have in for review today is the QPad MK-80 Mechanical Keyboard. The difference between a ‘normal’ keyboard and a mechanical one, is the type of switch that the keyboard uses for  the keys. The different types of switches include membrane switches – the most popular type found in most keyboards, Scissor switches – found in laptops and then mechanical switches, which are the switch type we are looking at today. The MK-80 retail version has MX Cherry Blue switches, but QPad do also give you the option of, red, brown or.
black (The MK-85 has Cherry Red switches).

The keyboard is well presented when in the box, with a fancy graphic of the keyboard on the front – showing the keyboard in all of its backlit glory. The rest of the box is covered with the features, accessories and various translations. Taking the sleeve off, you are presented a black box, which when opened displays the keyboard and the wrist-rest, supported at each end by some foam packaging. Underneath the keyboard is the manual and and some accessorises that will be focused on in more detail later. 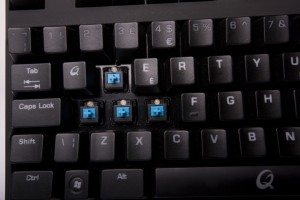 The MK-80 is aimed at gamers, however with the retail boards featuring Cherry MX Blue switches throughout, it makes it a slightly unusual area of the market to aim it at. The Cherry MX Blue switches have an audible click during the key press, which results in a fairly loud but very satisfying click. The keys also require slightly more pressure to activate, which again, makes it an odd choice. As you can see from the photo above, each key has it’s own blue LED, who’s brightness can altered. 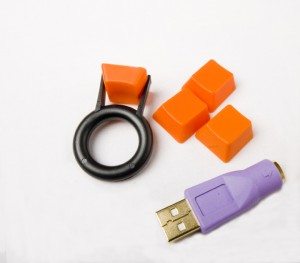 Also in the box are some orange keys, which can be used to replace certain others, like the WASD keys. To aid in swapping the keys, a clever little tool is provided that helps pull off the keys without damaging them. There is also a PS2 to USB adaptor, incase your motherboard doesn’t have a PS2 port. 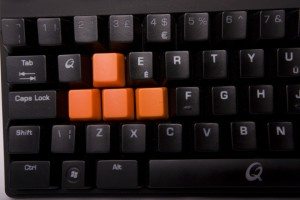 Here the WASD keys have been replaced with the blank orange keys, which makes it easier to locate these keys in your peripheral vision during those intense gaming sessions. They also have a slightly different texture (smoother), than the standard keys. Each individual key is also backlit by one LED,who’s brightness levels can be controlled using the function key (Fn) and the up or down keys on the numpad. 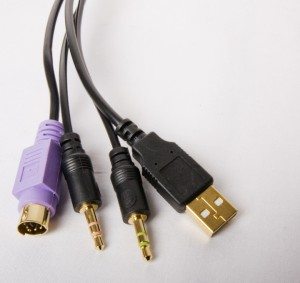 The keyboard has both a PS2 connector and a USB one, which also powers the USB port (seen later on). You also get a 3.5mm mic and headphone jack that means you can plug your headset directly into the keyboard, saving you from rummaging around the back of your PC. 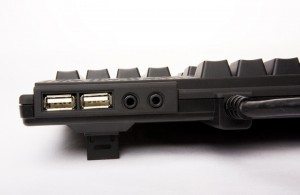 The MK-80 also has two USB 2.0 ports on the top side, as well as the headphone and mic ports mentioned above. This makes it a lot easier to connect devices such as pen drives. The keyboard also sports a pair of height adjusters that raise the back of the keyboard, which some people might find more comfortable. 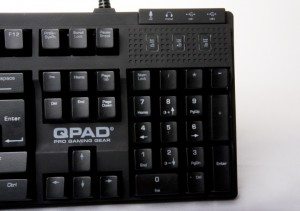 Another feature this keyboard has, is multimedia keys, which are present on the F keys along the top of the keyboard. This have to be pressed in conjunction with the Fn key that is located down by the right Shift key. This function button also needs to be pressed along with the keys that control the brightness.

The keyboard also features a wrist rest that is coated with the increasingly popular soft touch material. This simply clicks into place under the front edge. It’s not fixed so it does allow for some flexibility if one decides to increase the height of the keyboard. The wrist rest makes it more comfortable to type and helps alleviate RSI. The wrist rest features some small detailing in the centre, that adds to the quality characteristic of the keyboard.

Using the keyboard for both gaming and typing was a thrilling experience. Not only has it made writing this review easier by guarantying that each key has been pressed firmly, but it has improved all typing abilities, even when it comes to gaming. The orange keys may seem like a gimmick , but do actually help with locating the right keys without even looking at the keyboard.

Overall the keyboard has a very simple appearance, with subtle detailing that has set it’s self apart from the other mechanical keyboards on the market. The dark colour scheme, with blue individually backlit keys, positions the keyboard right at the top of many people’s wishlists. Not only does it look the part, but it performs like a dream also. Compared to many other keyboards that have been reviewed, this one stands clearly at the top.

Despite the high praise so far, there are a few little niggles that should be mentioned, and some of which are mearly down to the users preference. The first one is the price, the RRP for this keyboard stands at appromately 110 Euros, which is fairly competitively priced in for the mechanical keyboard market, but is still a lot of money to spend on a keyboard.

The next niggle is the type of switch used, however this is all down to preference. The Cherry MX Blue switches, whilst good for typing and gaming, seem an odd choice due to the noise they produce, and the movement of the switch, although, QPad are offering your choice of switch.

With these points aside, this mechanical keyboard is probably one of the best that we’ve had in to review, so because of this, we are proud to award the QPad MK-80 Keyboard with the prestigious: