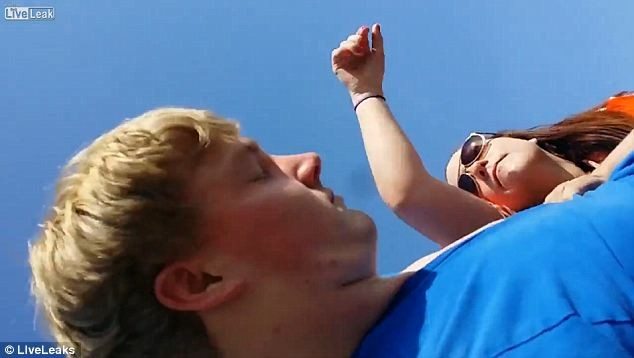 Personal quadrocopters such as the A.R. Drone 2 from Parrot are quickly becoming a techie’s toy and to be honest it’s easy to see why. There are though many people who do not know about them and / or think that people using them are doing so for illegitimate reasons such as spying or invading personal privacy. As the law stands, flying these personal drones in public spaces in perfectly safe to do and as long as they are within visual range at all times, there are no boundaries to their use. This doesn’t mean, however, that everyone else is going to know these rules as one Connecticut man, Austin Haughwout found out after a woman on a public beach decided that she was going to try to take the law in to her hands.

After following the drone from its position in the sky to where it’s pilot was positioned, 23-year-old Andrea Mears proceeded to accuse Haughwout of being a ‘pervert’ and that he was taking photos with the aircraft and directly uploading them to the internet. Certain of her allegations, the woman proceeded to call the Police to report what was going on and whilst the pilot proceeded to pack all his gear away, Mears – without any warning – turned to lash out on him, beating him to the ground in the process and ripping his top as she held him in place.

Little did she know, Haughwout was recording the event as it unfolded on his phone, with video included, so as she proceeded to assault him, he remained clam and did not fight back – a move that would work in his favour down the line.

After calling the Police for the third time, this time stating that she had been assaulted, cops quickly arrived in full force, including the DEEP and an ambulance, only to find that they were being falsely informed of the situation as Haughwout proceeded to show the cops the footage that he had just recorded. Suffice to say, 23-year-old Mears was swiftly arrested for assault and breach of peace. The video was used by the cops in the prosecution.

Although this event occurred over a month ago, Austin’s video displaying the assault was removed from YouTube as it violated their policies, the joy of the internet has worked its wonders as LiveLeaks brought the video to surface last Sunday as seen below.

Following the assault, Austin wrote of the experience on the RCGroups forum, as well as posting a copy of the footage that was recorded from the drone during the flight that was made in the run up in the assault.

Whilst I can partly understand where the woman was coming from, after all it is not often that you see drones like this flying over the beach where people tend to sunbathe, the way in which she reacted was way out of proportion and thanks to his video evidence, Austin proved the its +1 to technology for providing clear evidence of the crime. And just in case you want to see the footage from the flight, here it is: