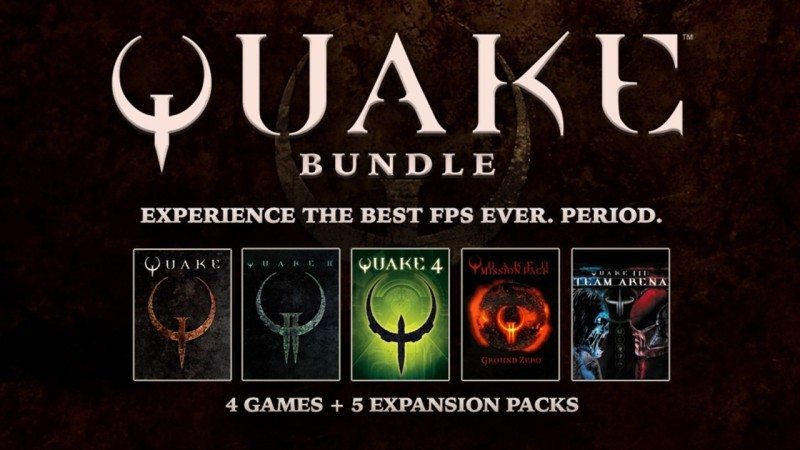 Quake, one of the most iconic shooters of all time, is now available at Bundle Stars. While that in its self isn’t the biggest news ever, what really stands out is that all games in the Quake franchise and all their respective DLC are bundled together for one amazing price.

From the original Quake, the legendary Quake II, and even my personal favourite Quake III Arena are all included. This is a huge amount of classic gaming for you to play through and even if you’re done with it, it’s not a bad stocking filler for those shopping for a few Christmas gifts this holiday season.

QUAKE – Stop the Alien invaders and take on 32 single player stages, and compete in 6 deathmatch stages. Experience the immersive world of Quake, a game still considered to be one of the most influential games of all time.

QUAKE Mission Pack 1: Scourge of Armagon – Their leader Shub-Niggurath may have been defeated, but the QUAKE forces still roam Earth. Leap into the connecting portal and shut down the source of the evil for good.

QUAKE Mission Pack 2: Dissolution of Eternity – Your journey has led you down a path of no return. Save the entire universe and stop QUAKE for good, or die trying in the two concluding chapters in the original QUAKE story.

QUAKE II – Travel to Alien planet and fight to determine the fate of humanity. With your team reduced to but a few, and the odds stacked against you, will you be able to shut down the enemy’s war machine for good?

QUAKE II Mission Pack: Ground Zero – Taking out the Big Gun sounded simple enough, except the Strogg were waiting. You may have survived that, but The Gravity Well, the Strogg’s newest weapon in its arsenal against mankind, is now operational.

QUAKE II Mission Pack: The Reckoning – As part of an elite commando force, you must work to infiltrate a hostile Alien cite in order to stow away on an Alien spacecraft. Only then can you destroy their secret moon base, and complete your mission.

QUAKE III Arena – Welcome to the Arena, where high-ranking warriors are transformed into spineless mush. Take on Alien races with explosive weapons knowing that only the victor gets to walk out alive.

QUAKE III Team Arena – United by name and by cause, The Fallen, Pagans, Crusaders, Intruders, and Stroggs must channel their power into an allied operation, where teamwork is the only method of mass destruction.

QUAKE IV – Continuing on from Quake II’s conclusion, take the battle to the heart of the Strogg home planet and become earth’s only hope for victory. This time around, the only way to defeat the enemy is to become one of them.

There is one small catch, however, the bundle is region locked, so if you’re from Germany, Austria, Switzerland, United Arab Emirates, Saudi Arabia, Kuwait, Bahrain, Qatar, Egypt or Lebanon, Steam will NOT active the codes for you.