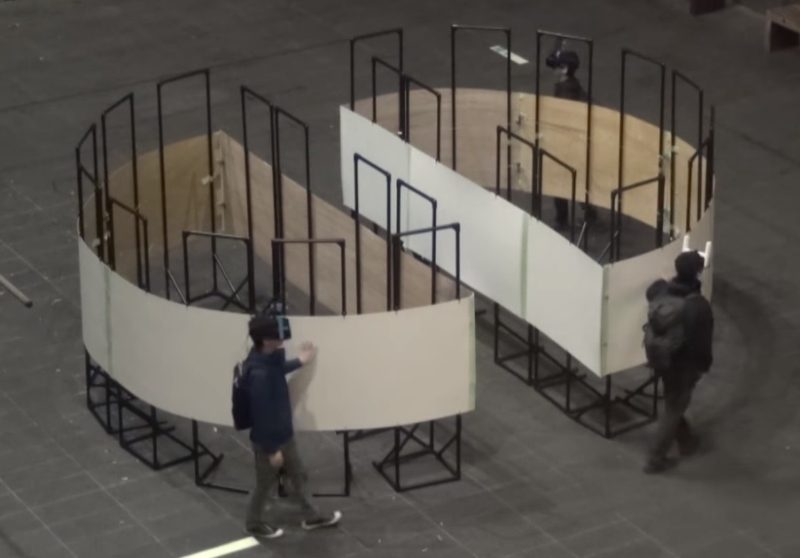 When it comes to playing VR games, one of the main constraints on full immersion is the amount of real space available for play. But what if your body could be tricked into walking in circles, while you feel like you are always walking straight ahead? Researchers at the University of Tokyo have been developing this idea by building the “unlimited corridor” which made an appearance at the recent Siggraph show.

The reality of the “unlimited corridor” is far less amazing than it sounds and is, in reality, two convex walls with a small corridor between them. Despite how bizarre and simple it seems, a video shows just how well the walls work, with those involved in the experience all walking around and between the walls as if they were really walking down a large number of corridors. Meanwhile, in VR, the subjects were experiencing “a VR search for confidential information in a skyscraper,” which is a very simple idea, but one that allows an easy demonstration of how well the technique works.

In order to perform this trickery, the experience makes use of redirected walking (RDW) techniques, which are based on a number of haptic clues and allow the body’s spatial perception to be deceived. By ensuring the curve of the walls isn’t too tight and the other sensory input is deceptive enough, it is no longer obvious to users that they are actually walking in a loop and they do not become dizzy.

Sadly, the infinite hallway won’t become part of your home VR setup anytime soon, as while it allows for the simulation to feel infinitely large, it still requires a large amount of real space. Also, it only works for as long as the user is interacting with the walls, so any VR games that see you moving in free space or away from walls won’t be able to benefit from these techniques (yet?). It’s definitely interesting to see just what the human body can be tricked into believing thanks to VR though.