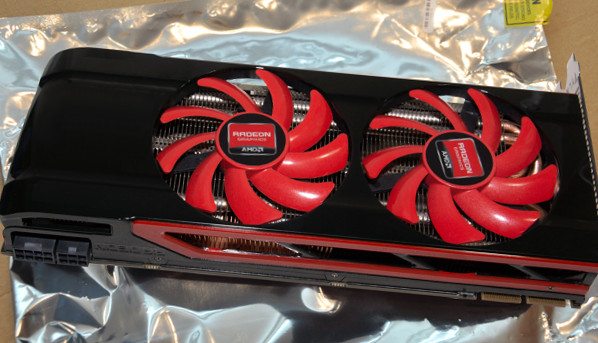 An image has shown up on the notorious 4Chan website showing what is apparently a picture of the AMD HD 8970 graphics card. Alongside the pictures the uploader also added specification information. This states that the GPU is the 28nm Curacao XT architecture with 2304 stream processor, 48 ROPs, 144 TMUs and has 3GB of GDDR5 across a 384 bit memory interface. The graphics card also uses a 250W TDP which is higher than the 210W TDP the HD 7970 came with on launch.

The HD 8970 reportedly comes with a price tag of $549, the same as the HD 7970 at launch. This makes it $100 cheaper than the GTX 780 but we still can’t be sure which card is better so the lower price could be for a valid reason, such as lower performance. On the cooling front the card uses a similar cooling solution to the AMD reference HD 7990 except with two fans not three. The HD 8970 has two CrossFire X connectors for up to 4 way CrossFire X.

We are a bit late to this news, for which I apologise, so we could see details emerge very soon as the E3 2013 Expo (dates 11th – 13th of June) is when the AMD HD 8970 is speculated to be announced. This would make sense as AMD doesn’t want to lose business to Nvidia who got the GTX 700 series out very swiftly. If the E3 reveal is true then we could expect more details as soon as today and over the next few days, if not then the new HD 8000 series graphics cards will almost definitely arrive by the end of 2013 like previously speculated. Although what the 28nm GPU on the HD 8970 GPU means is that the 20nm process shift won’t occur until the HD 9000 series despite rumours which told us the HD 8000 series would bring the shift to the 20nm process earlier in an effort to get one over on Nvidia.

Although as always these are based on some rather shady postings on 4Chan that could easily be fake so we shall wait and see as to whether any of these details turn out to be true or not.