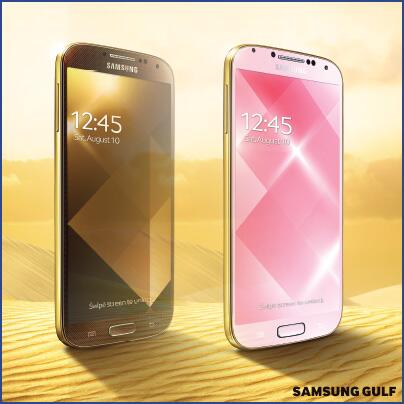 The champagne-coloured iPhone 5s, which made its début a couple of weeks ago, is outselling any other iPhone model by far. Samsung also has announced its competition, a Gold Edition of its latest Galaxy S4.

The new devices will come with a gold plastic trim on the outside, while the front glass will be available in brown or pink. The handsets were announced by Samsung Gulf, the company’s Middle Eastern branch.

However Samsung did not announce if the Gold Edition will be available outside of the Middle East. But given the rumors  that HTC are also planning to have a go with a gold version of its flagship One smartphone, a strong competition could be heading behind Apple and its champaign-colored iPhone 5s.

Both HTC and Samsung have accordingly been sued by Apple, accusing its rivals of stealing their ideas. HTC smartphones were first attacked by Apple in 2010, though those complaints were eventually settled. Apple’s patent infringement pursuit against Samsung began in 2011 and remains ongoing, having expanded to new courtroom venues throughout the world.

Thank you AppleInsider for providing us with this information.