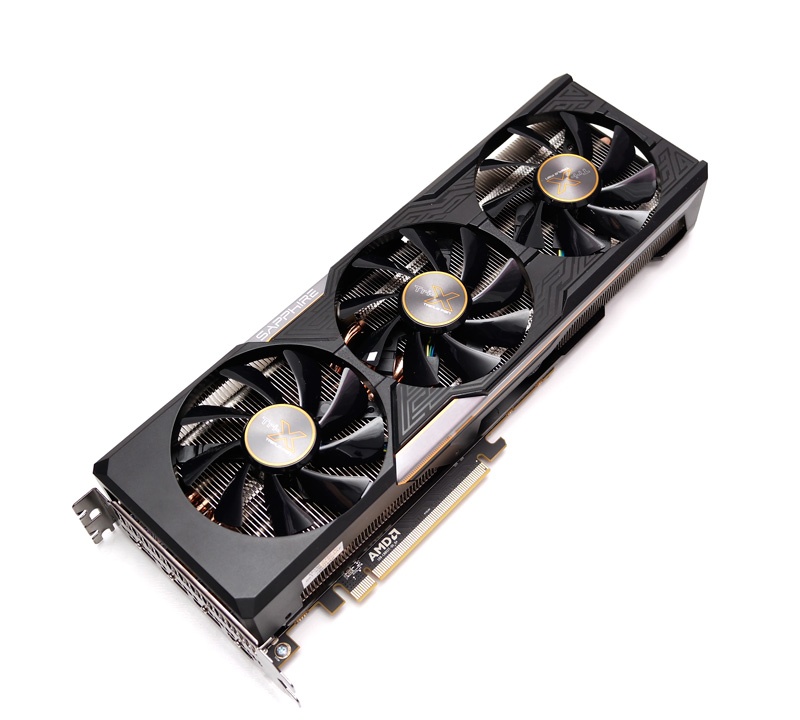 Something that we don’t really get much of a buzz from is the ‘second best’ graphics card, Okay the R9 390 is good, but we all want to know about the R9 390X; so why has the hype kept momentum even after the R9 Fury X launch, ready for the R9 Fury? The main reason is likely the fact that it’s water cooled from the factory, even though most people want water cooling, it can be problematic or even just too large to fit inside some cases. Those who held off buying the Fury X are now in for a treat thanks to AMD allowing sub-vendors the ability to customise the R9 Fury.

Sapphire is one of the manufacturers who take the reference card and just make it better without over-complicating the process, which pushes the price up. By using the reference PCB, Sapphire has tweaked components and the legendary Tri-X cooler to make the Tri-X R9 Fury as good as it could possibly be.

Sapphire are undoubtedly the largest AMD graphics card supplier in the world and that shines through to the products. All of the cards have support for the likes of Liquid VR, FreeSync, Eyefinity, and VSR technologies, which really give them the edge against the competition.

Liquid VR is AMD’s take on the VR support, providing the most comfortable and realistic experience possible through compatible headsets and graphics cards. VSR is one of the newer technologies, standing for Virtual Super Resolution, the graphics card renders the detail of a higher resolution screen and displays that detail on your current monitor. For more information, please consult the AMD Catalyst 15.7 driver release notes.

Looking at the R9 Fury, it is essentially a cutback R9 Fury X, by reducing the shader units and TMU’s, AMD was able to decrease the overall performance by around 10%, however this card is roughly 25% cheaper; so what gives?

Let’s just jump into the testing to see if the wait has been worth it. 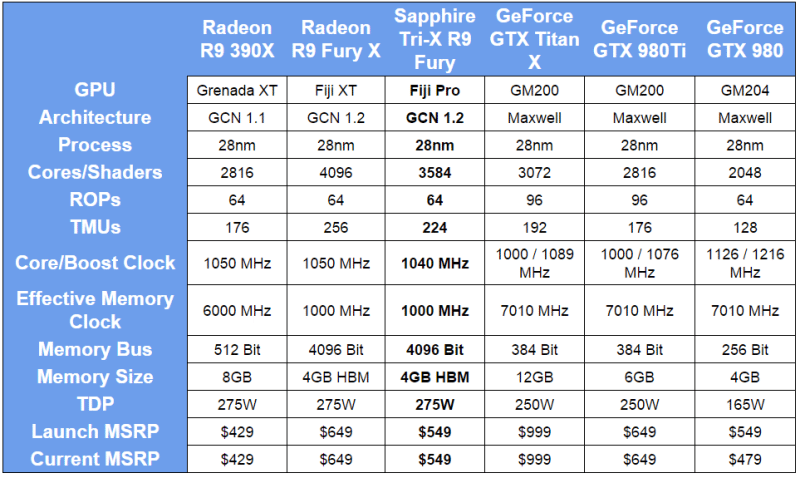 Sapphire has taken a slightly different turn with the new Tri-X box styling. The R9 390X followed the same style of the R9 290X, where this seems to resemble the R9 390 Nitro box with a window cut out for a sneak peak of the card itself. 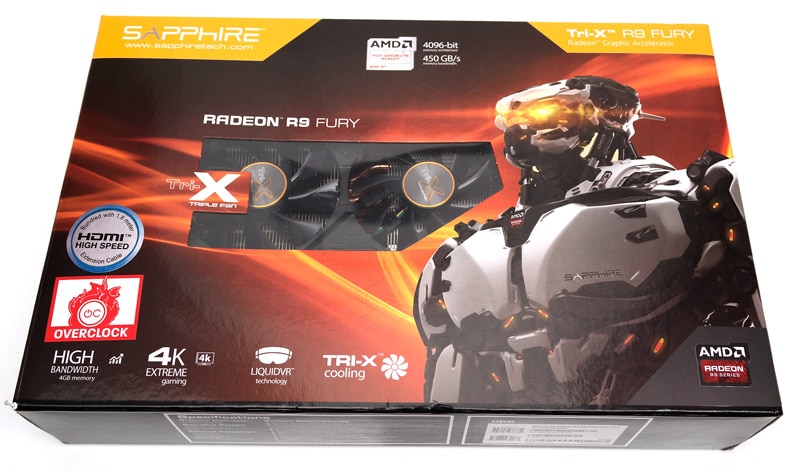 Inside the box, we find the usual array of manuals and leaflets, along with a 1.8m HDMi cable and DisplayPort – DVI adapter cable. 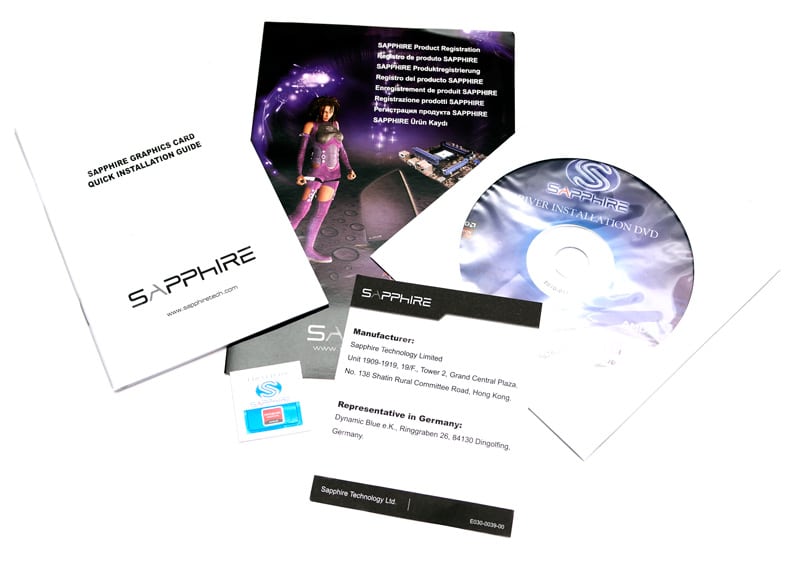 The card is the same length as the R9 390X Tri-X thanks to the Tri-X cooling shroud, however, this one is more aesthetically pleasing.

Around the back, we can see the absolutely huge heatsink. The PCB is very small, the same size as the R9 Fury X.

Focusing on the Power connectors, 2x 8pin PCIe allow the Fiji GPU to get all of its power. On the opposite side of the ports, we see the trademark Fury load LED’s. Unlike the Fury X, these are blue when under load, which could be a differentiating feature or maybe a Sapphire special.

Turning the card over, we see the full length of the card vs the PCB length. This card would have been perfect for the R9 380 Nitro cooling shroud due to the length, but that would have detracted from the premium Tri-X branding. The backplate is very nice, thankfully Sapphire has taken note and added one to this high-end card.

At the business end of the card, we have 3x DisplayPort and 1x HDMi ports.

Sapphire has taken the new Tri-X cooling design as seen on the R9 390X and improved it. I liked that the new design was understated, but this design is even better. 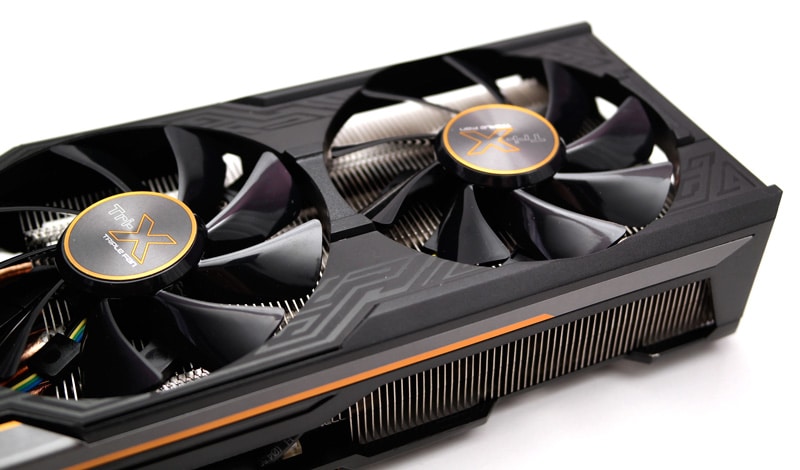 Side by side you can see what has changed between the two cards. Sapphire has held back on the colour of the Sapphire logos and added more detail around the fans. 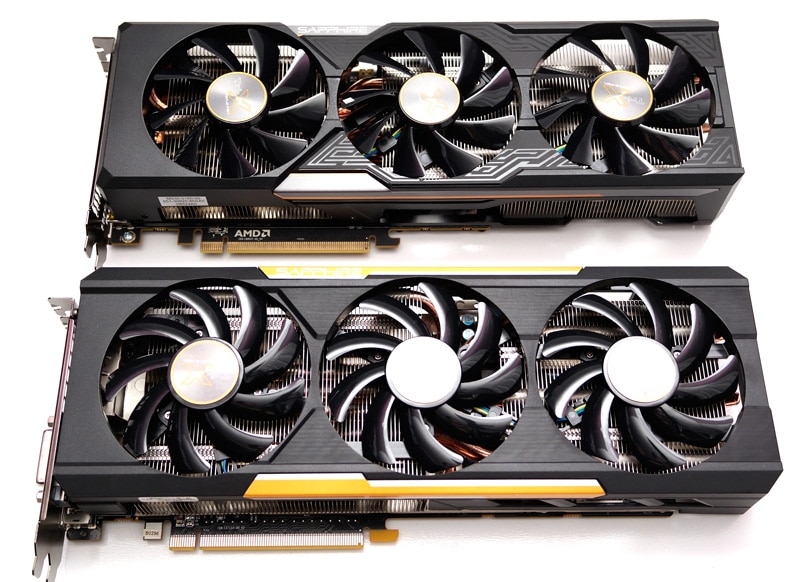 Turning the cards over, you can see that the R9 Fury Tri-X edition has more heat pipes and a much larger heatsink. 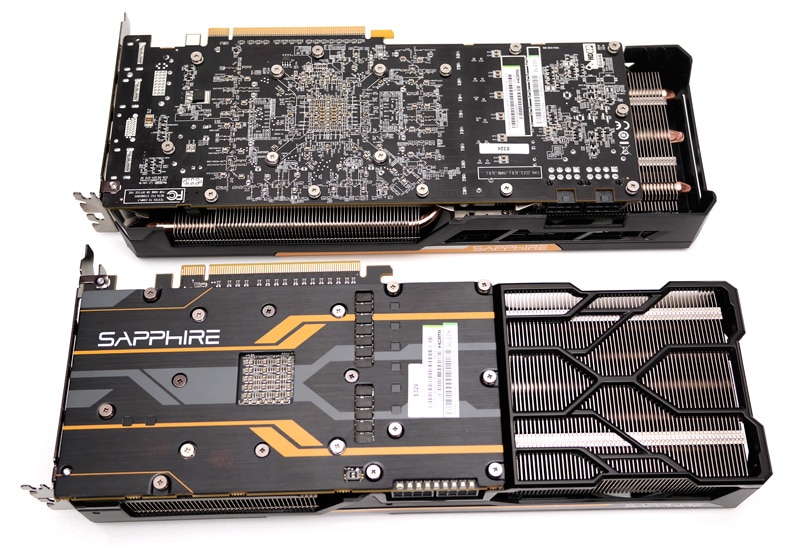