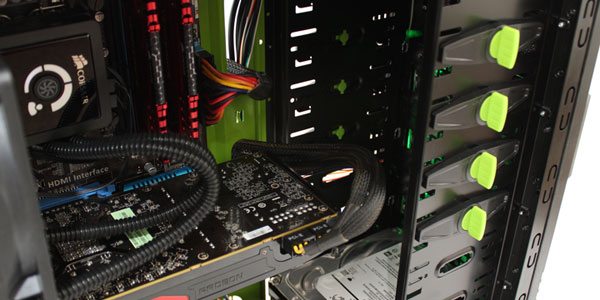 With the hundreds of PC cases that are on the market today, the spectrum of styles and designs is very wide.  On the bottom end of the scale there is the case that is there to do its job and not much else, whereas on the top end of the market, there are the highly customisable cases that have stacks to offer.  The design of these cases follows pretty much the same pattern, but there are some people out there that would like to have a case that on the outside is a little understated & aesthetically clean and on the inside has a little more to shout about.

When we think of a value case, in general most people would visualise a case that has its 6 sides, a space to mount everything and some basic I/O.  With the T9 however this is not the case.  The chassis is made up of a very light aluminium frame with an open plan layout on the inside.  With this open plan layout, the case still comes with three 120mm LED lit fans, tool-less drive bay fitting, two grommets on the rear to allow for water cooling pipes to pass through, 7 expansion slots, a point on the floor of the case to bolt an SSD to and space to fit a combination of upto 9 5.25″ and 3.5″ drives.

Other items that come with the case include three front USB2.0 and one USB3.0 port, front audio headers, the acrylic side panel window and most significantly the option of having the motherboard tray, expansion ports and drive bay locks in four different colours.

The Sharkoon T9 Value Series case seems to, on paper, fit into the latter of these groups with its understated looks, simple design and bright internal colour options.  We do have to remember though that this is a value case with the bare essentials, so have Sharkoon been able to make a product that still offers a level of flexibility, simplicity and a fell of quality in a back to basics design?