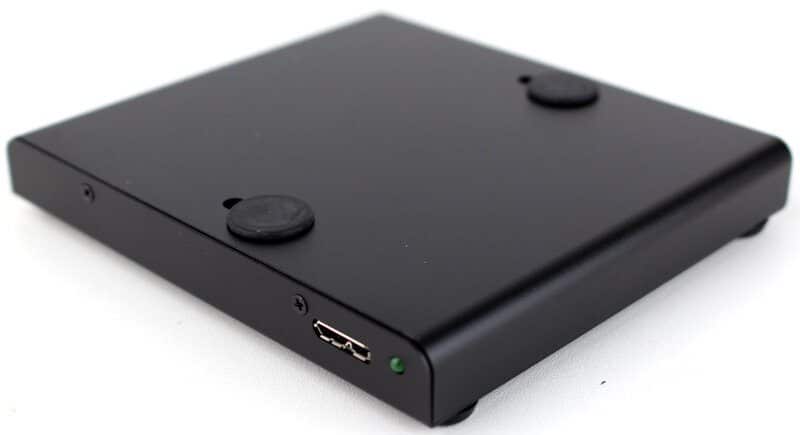 Intel’s NUC series of mini PCs as well as SilverStone’s lineup of Petit series are amazing and bring a lot of great hardware in a very tiny box. They do however have one problem for some people and that is the lack of storage upgradeability. A few of the NUCs have a 2.5-inch bay, but most only feature mSATA, M.2, and similar next generation form factors. That sets some limitations, but limitations are meant to be broken and SilverStone did that with their PTS01 external USB 3.0 storage enclosure that fits the NUC and Petit cases like a glove.

SilverStone designed the PTS01 specifically for the Intel NUC as the majority of the NUC motherboards only support mSATA in order to reduce the dimensions. Where basic and small is great for the one, the other wants a little more. The PTS01 easily stacks with the NUC and Petit series chassis and it can even be placed between the NUCs and their mounting positions such as behind monitors. That way you don’t increase the footprint of your system, at least if you got a little more space behind your monitor. 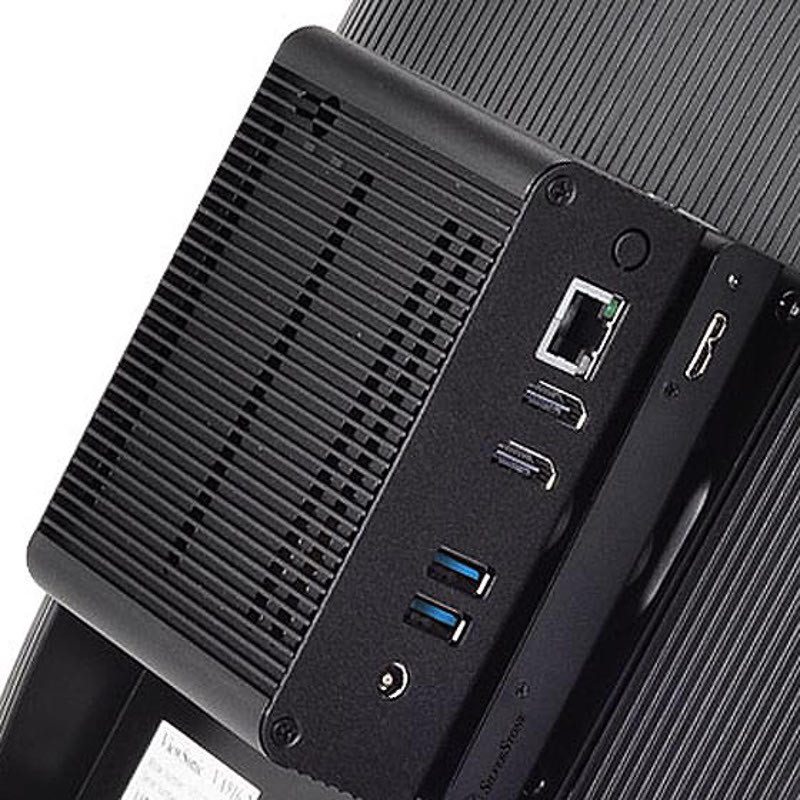 You can mount a 2.5-inch hard disk or solid state drive with a maximum height of 9mm in the SilverStone PTS01. It is fully SATA III and USB 3.0 compatible with backward compatibility on both sectors. This could truly be the perfect and most convenient way to expand the storage of your NUC system.

The PTS01 is made from aluminum and steel which makes it sturdy and also helps with the cooling of the drive you mount inside. The tiny chassis measures just 122mm by 108mm by 15mm and it weighs just 125-gram thanks to the choice of material. 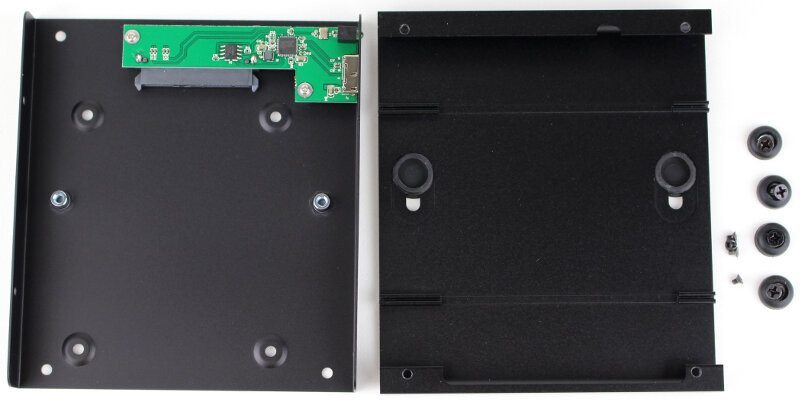 The SilverStone PTS01 storage enclosure is very simple on its own as it’s just a two-piece enclosure held together by eight screws and containing a small PCB at one end. On the PCB, you can see the USB 3.0 port and the activity LED to the right and we also spot the ASMedia ASM1153E USB 3.0 to Serial SATA bridge chip. The ASM1153E supports UASP for even better transfer speeds and a larger command queue. The enclosure did however not register as UASP device on my Windows 8 Pro system.

The simple black box has a premium feel over it thanks to the full-colour print, although you probably won’t look much at the box after you unpacked the enclosure. It also showcases the product itself and the main features right on the front. 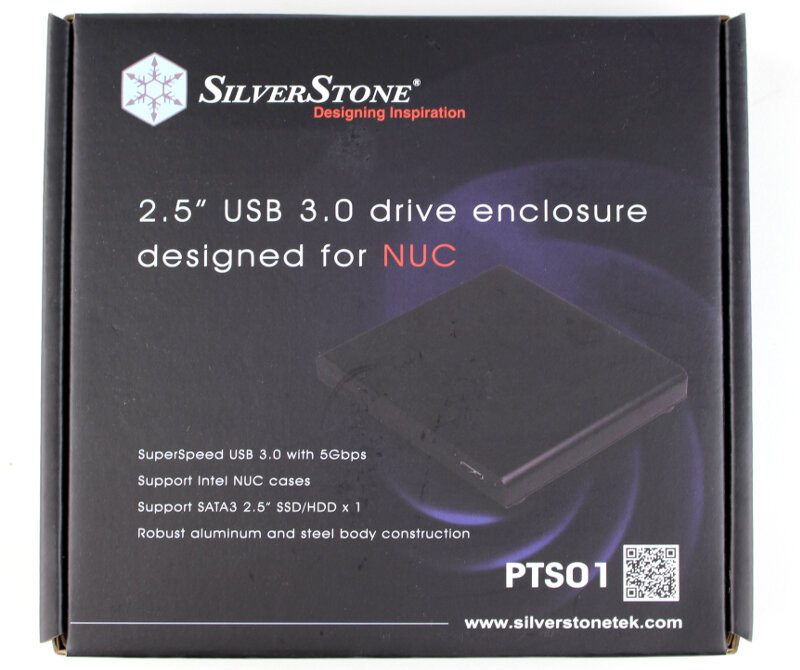 The rear of the box has all the specifications themselves and a small image showcasing the usage directly connected to a Petit case. 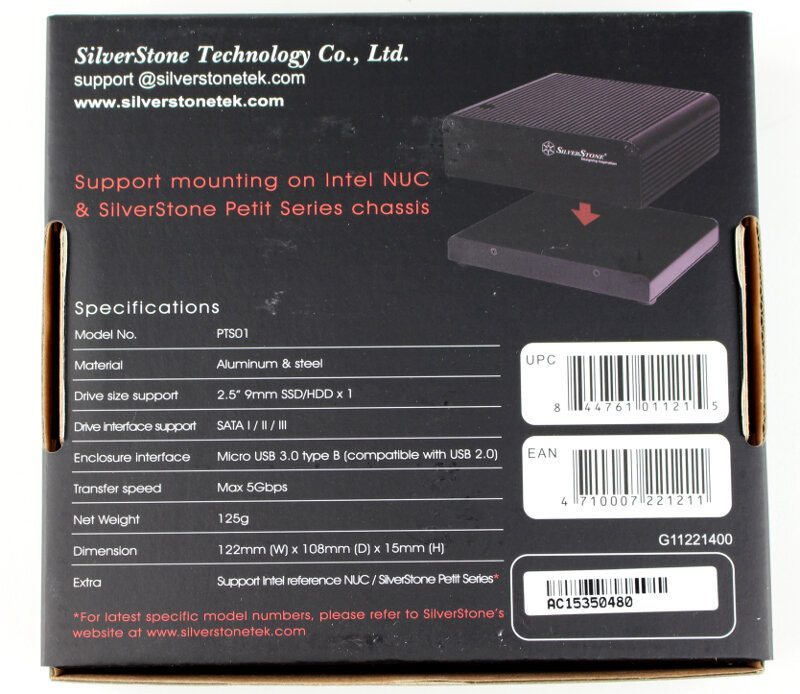 Inside the box you find the enclosure itself along with a USB connection cable and all the screws you need to mount a drive inside as well as mount it to the NUC or Petit chassis. 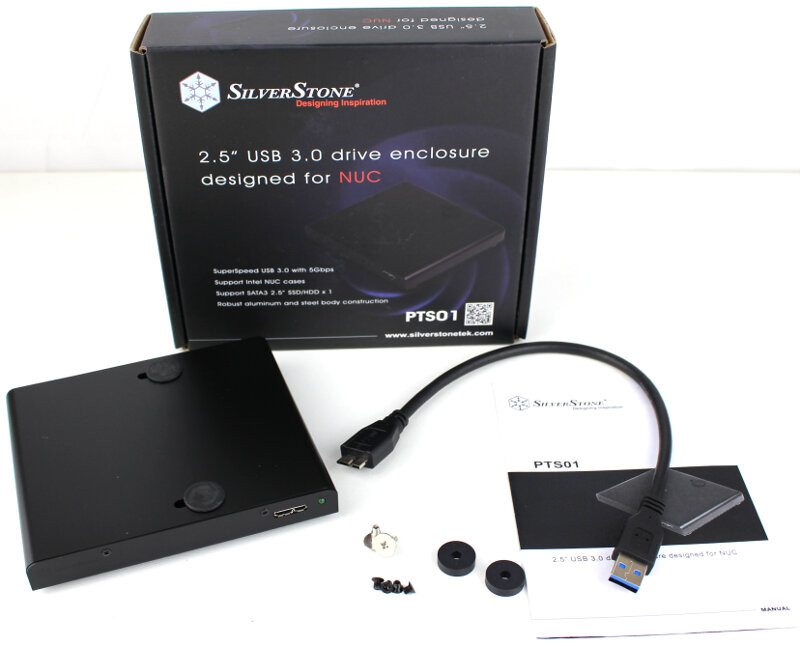