Specifications and A Closer Look

Before we get to the actual device and its specifications, let us have a closer look at the labels attached to the packaging. The label on the front has a nice picture of the device along with its name at the top. Below it is a short description of what it is best suited for, or rather, which task it was designed for. The DiskStation DS418 is a blend of performance and value. That means that you’ll get a great performing device without breaking the budget. The main strength, besides the obvious ones which are the same for all Synology devices, is its media capabilities with real-time 4K H.265 video transcoding.

Other highlights include the processor itself, the capacity possibilities, and dual network connections. 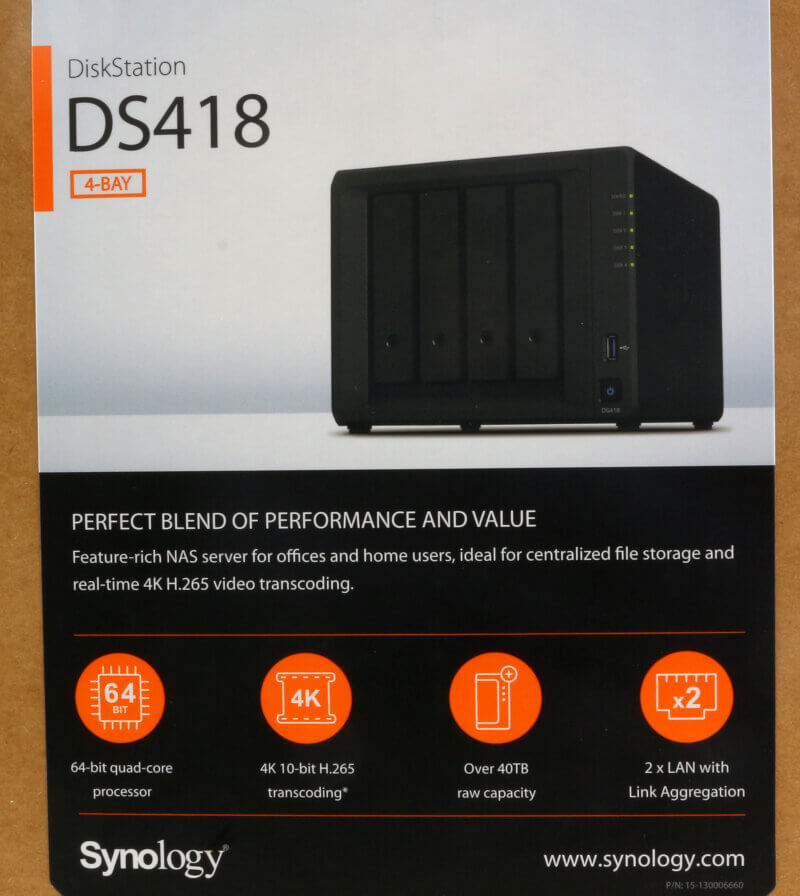 The rear label has all the details, as you can see. There isn’t a whole lot to say here besides what you can read yourself. 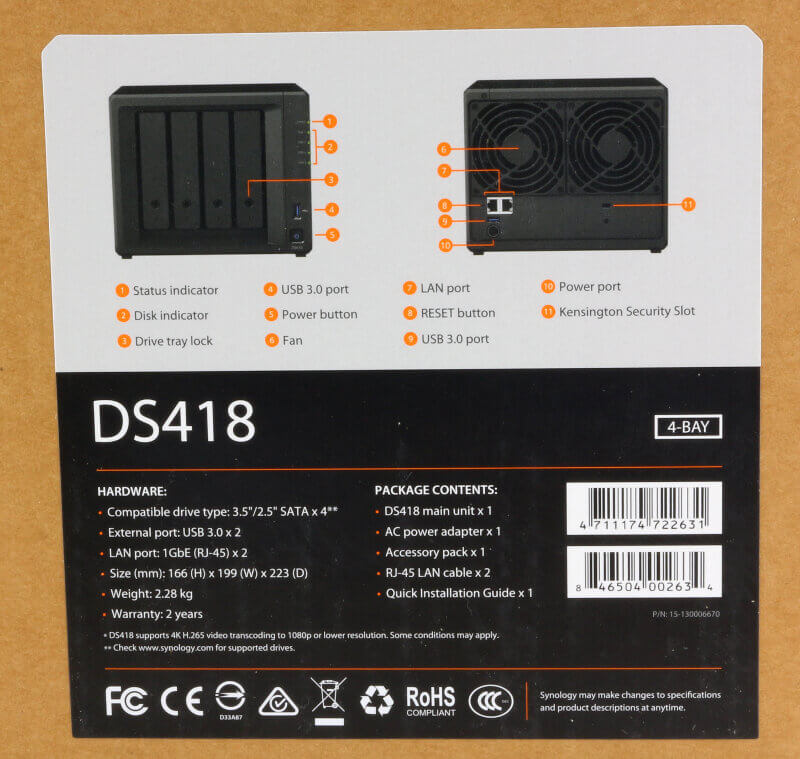 The specifications are taken directly from the manufacturer homepage. They are valid at the time of the review, but they may be subject to changes in future revisions of the product. 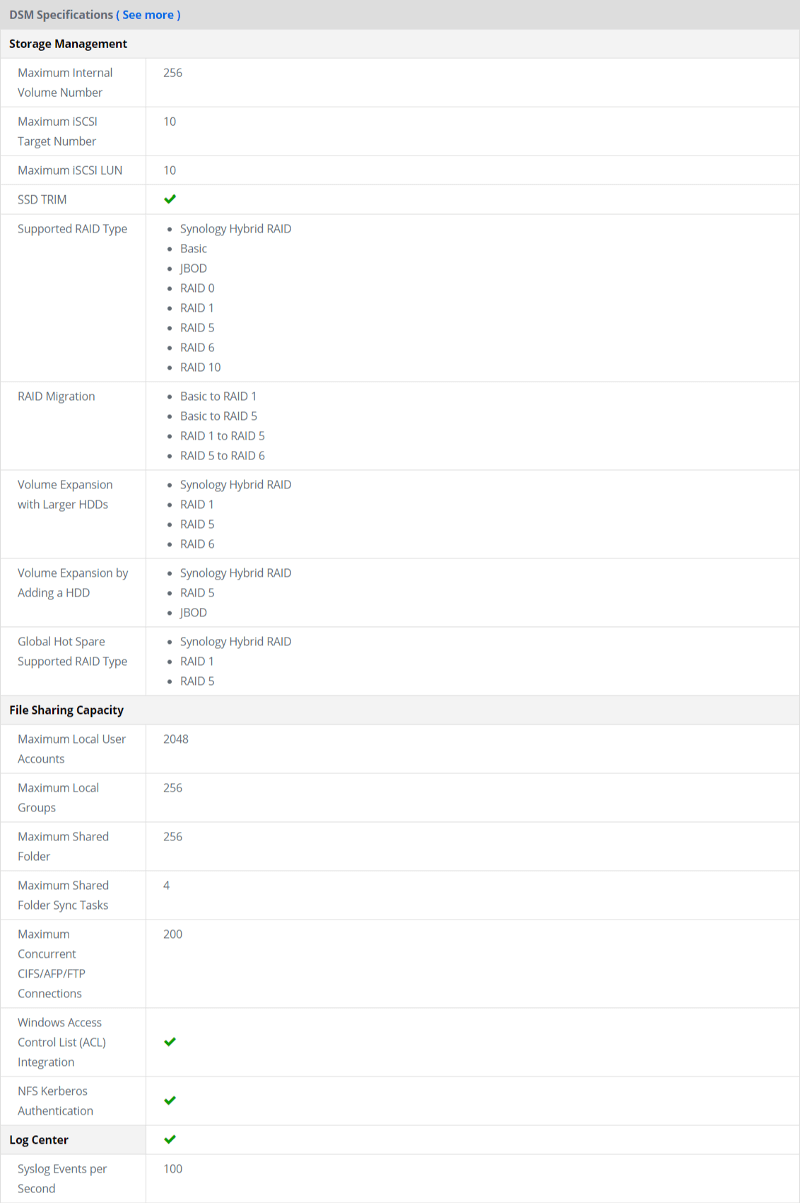 A look at the Bottom

Let us first take a look at the bottom of the NAS. While it isn’t the most interesting part of a NAS, it shouldn’t be overlooked. We see four rubber feet here as well as a small air intake for the motherboard area. 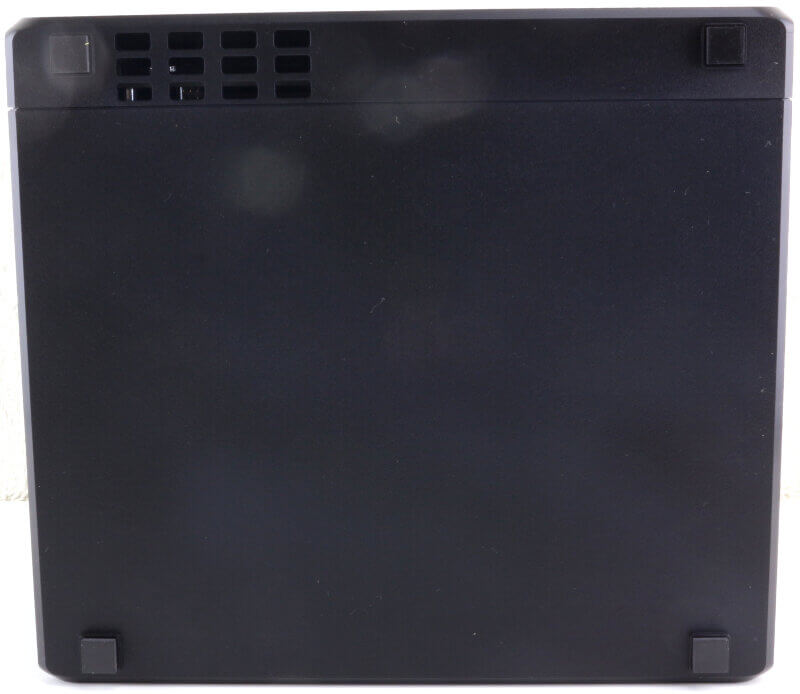 The two Sides of the NAS 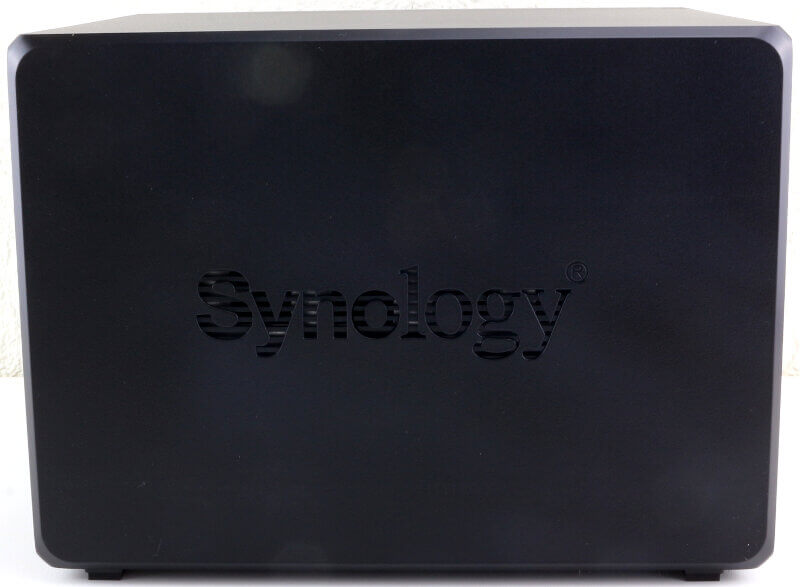 The rear of the unit

Now that we got the little more boring details out of the way, let’s turn the NAS and have a look at the rear. To the right side is a latch for a Kensington security lock. Tie your NAS to your premises and make sure that it isn’t easy to just run away with it. 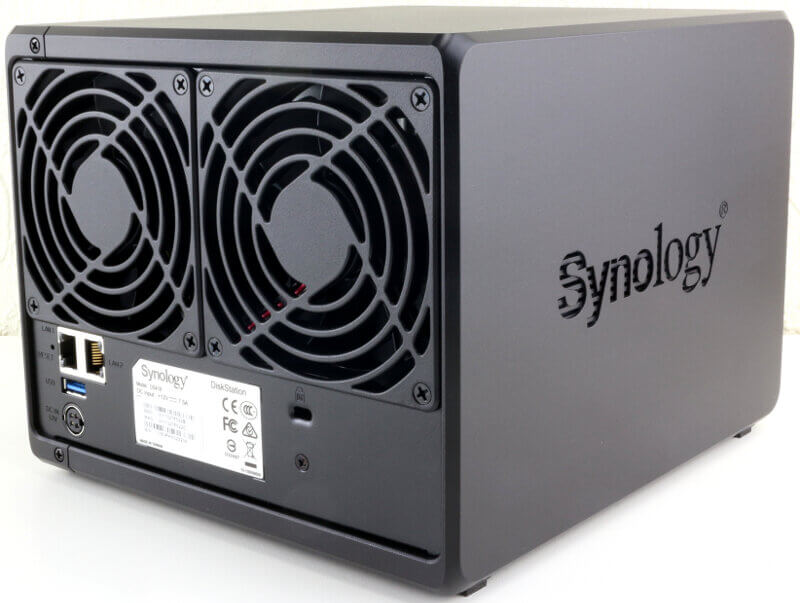 To the left side are all the main connectors At the top are the two LAN ports and below those is a USB 3.0 port. We can also see the power supply connection as well as the hardware-reset pinhole. 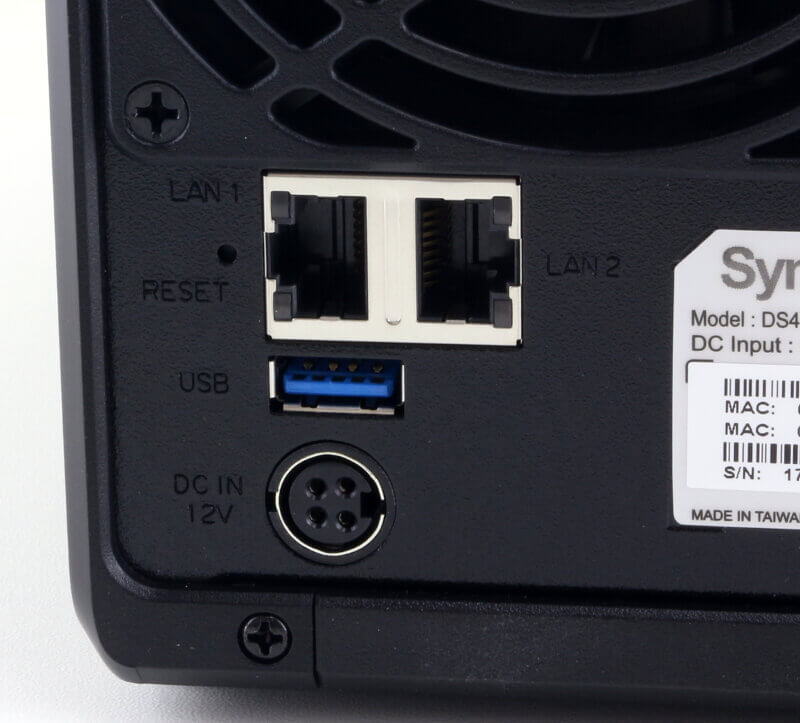 The two 92mm fans take up the full width of the NAS, and they’re placed at the top. Here, they’ll make sure that the installed drives are properly ventilated. They’re also easily removed when you want to clean them. 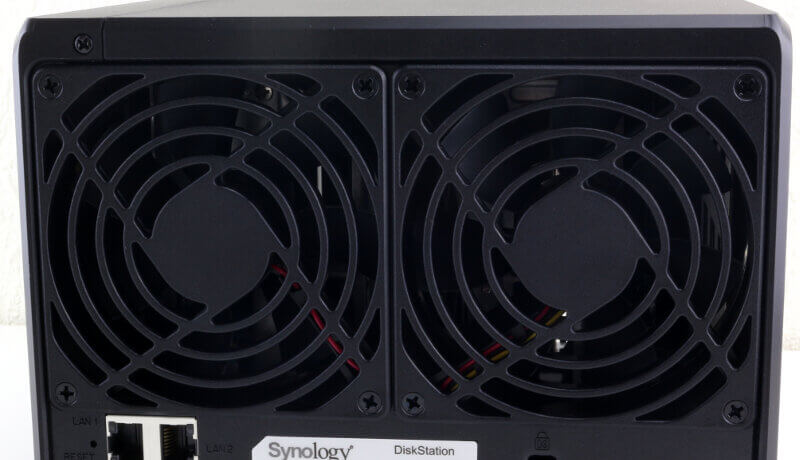 A Good airflow past the drives

Before we get to the general features found on the front, let’s stay with the cooling a little longer. Mechanical hard drives can run quite hot under prolonged usage, and as such, they need great cooling. In the image below, we can see that there’s plenty of room between the drives for a proper airflow across all four drives. In fact, we can see right through the device, if it wasn’t for the fans at the rear. 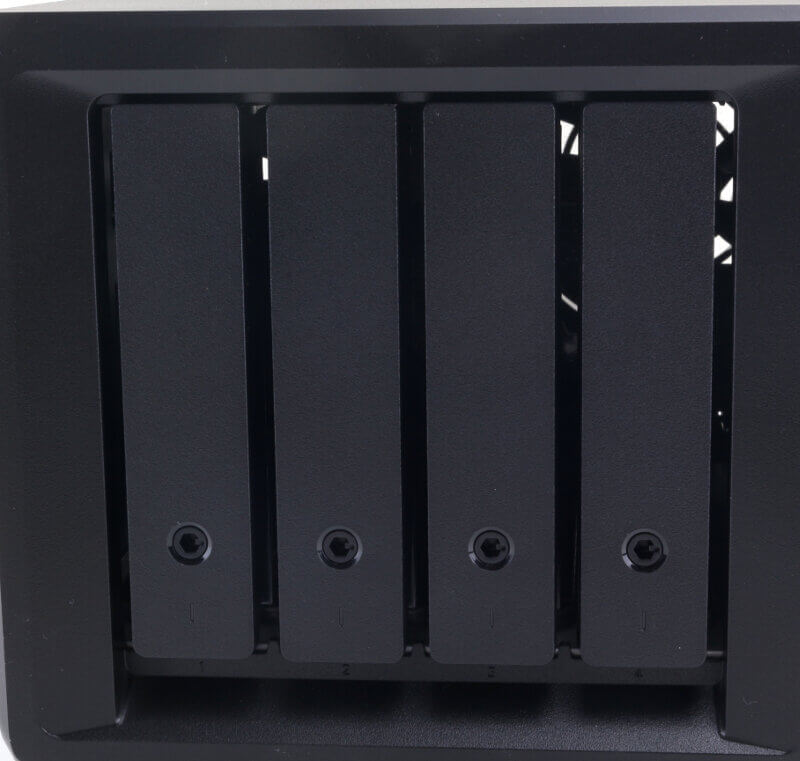 A closer look at the front

The front is the most interesting part, at least for most people, and we’ll start with a look at the indicators. There are separate LEDs for all four drives as well as a general status LED at the top corner. 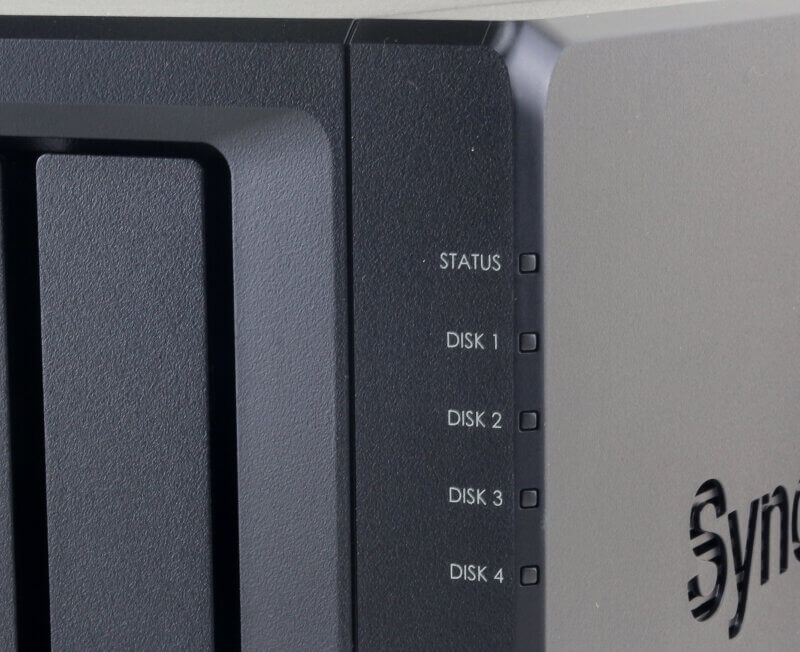 Below the LEDs are the front USB port and the power button. The power button has a LED indicator built in too, letting you know when it’s turned on. 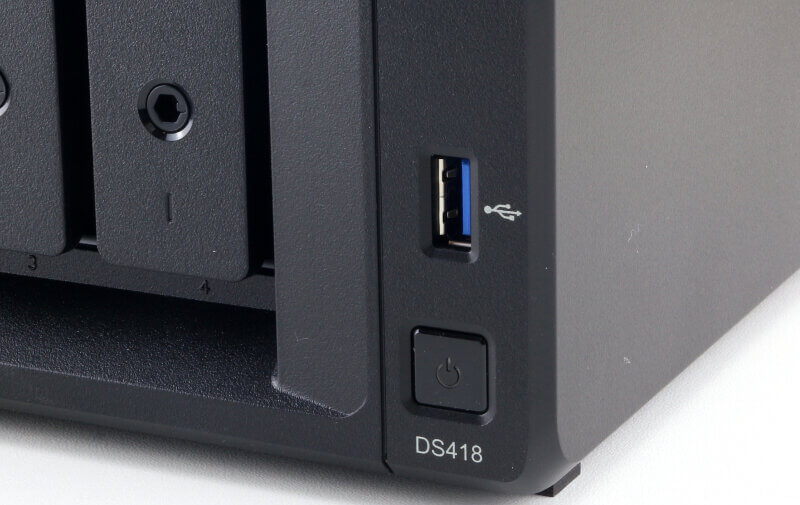 There are two final things to highlight on the front, and that is regard to the drive trays. On the DiskStation DS418, the trays are lockable. This has two advantages: You won’t accidentally eject a drive tray, and no one can run away with them in a spur of the moment situation. The second thing, you can spot under the drive trays themselves. The disks are labelled with 1 to 4 here which will help you identify the correct drive physically in relation to their number. For example, if the OS tells you that the third drive has trouble, then you know exactly which one it is you’ll have to eject and replace. 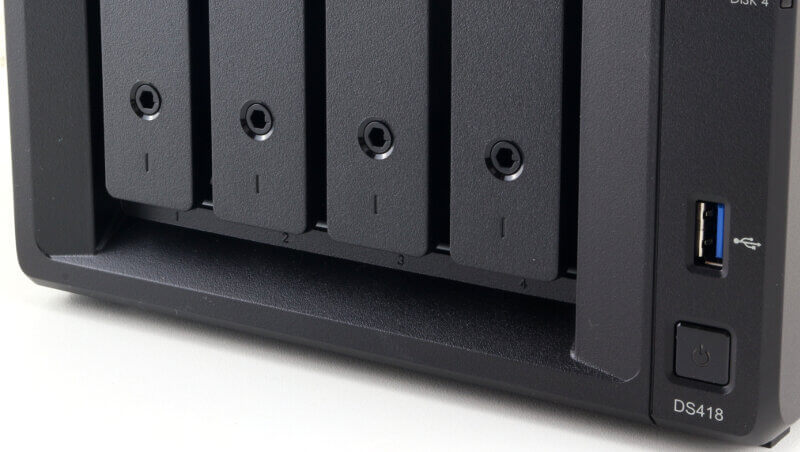 Synology’s drive trays allow for tool-less installation for 3.5-inch drives, if you wish to do so. You can still screw them in if you rather want that, but it isn’t needed. This makes the installation of drives very quick and hassle-free. 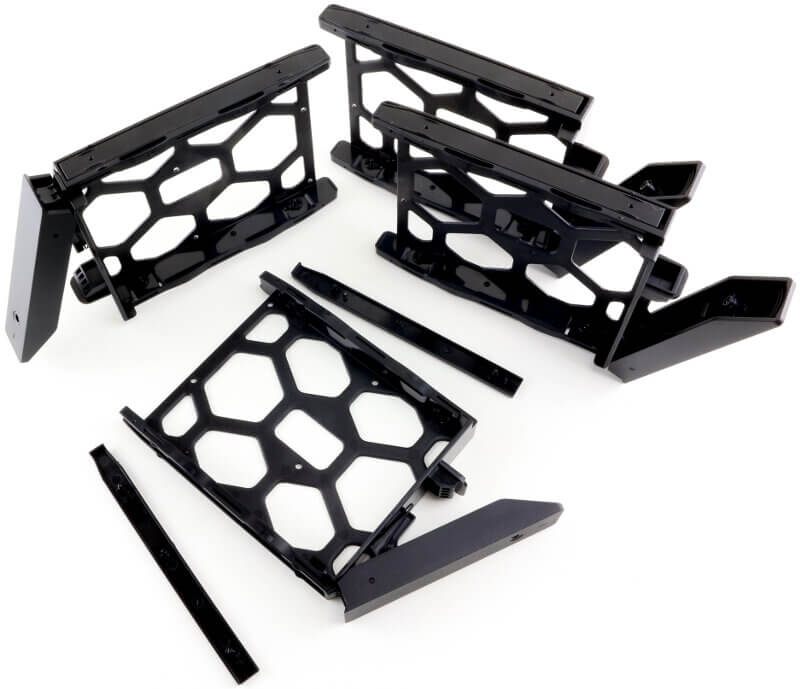 The drive trays are suitable for 2.5-inch drives, but they have to be screwed in. You can see the screw holes for this kind of drives at the bottom of the tray. 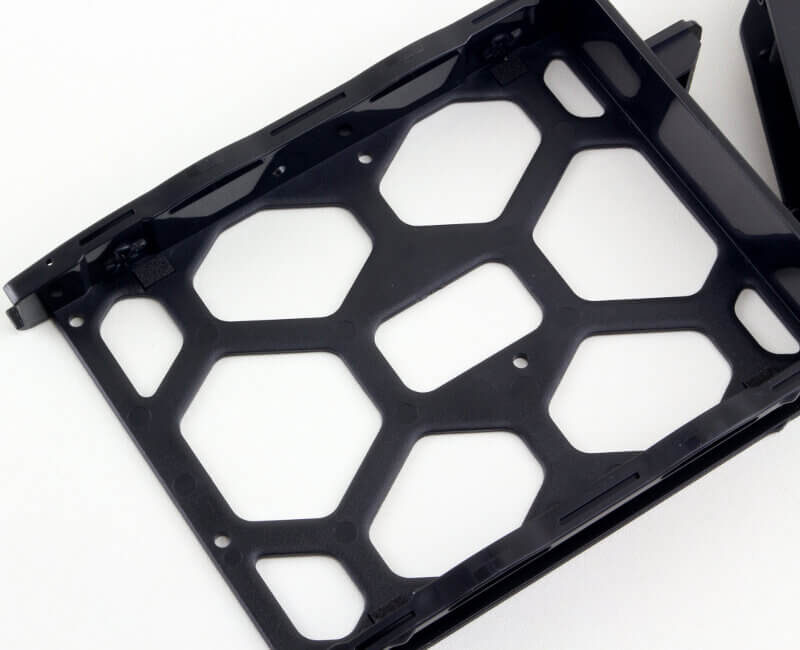 And this is how the trays look with drives installed in them. 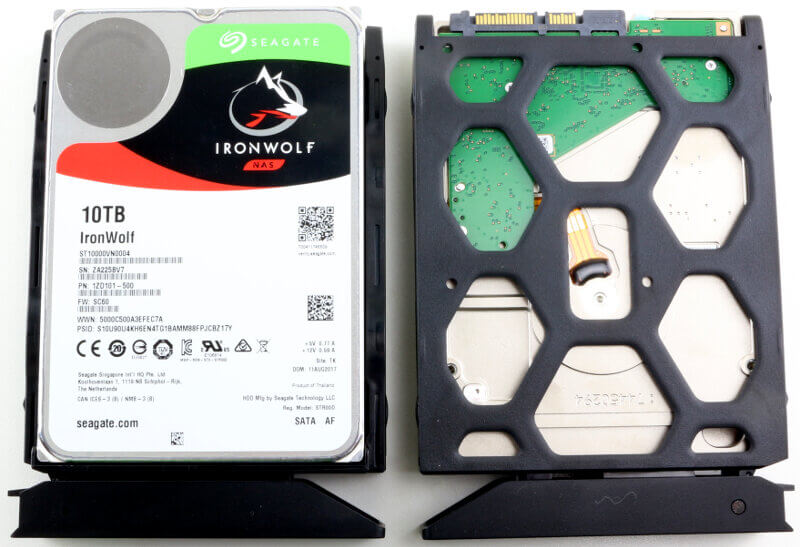