This week I’m taking a look at a NAS from a company that I’ve been wanting to get hands on with for quite a while now. In the UK NAS markets, QNAP and Thecus are two of the top players, however there is another company that have just as much of a presence as those that I’ve just mentioned – this is of course Synology.

Formed in 2000 by two ex-Microsoft employees – Cheen Liao and Philip Wong – Synology’s goal was to bring enterprise level NAS technologies down to an affordable price point for the small-to-medium business market and later on the small office / home office user as well. Whilst it took four years for Synology’s first NAS the DiskStation DS-101 to reach market, over the last nine years we have seen many solutions come to market under two main categories, DiskStation (DS for short) and RackStation (RS for Short) and in disk capacities varying from one bay solutions, right up to their biggest rack-mount unit which holds up to 12 hard drives for the biggest storage capacity that Synology can offer.

Before we delve into the in and outs of the DS213j that I’ve got to play with today, its worth noting the company’s very clever numbering system that to me is one of the easiest to understand out of those that I’ve seen in the past. using this NAS as an example, the model number is broken down into four parts. DS-2-13-j

The first part of the name is with DS or RS referring to either a DiskStation or a RackStation model with the first number that follows indicating how many bays the system holds – in this case 2. The second set of digits give us the year that the system was released, so 13 here refers to a release year of 2013. After that there is one of three options to be had. These are as follows:

With this all explained, it’s now easy to see, just from the model name ‘DS213j’ that we have an entry-level 2-bay system that was built this year and comes as a desktop design – nice and easy to understand if I have to say so.

Last of all before I dive into the guts of this compact little system, Its worth having a look at what comes in the box along with the system itself. Alongside a quick installation guide that shows how to install the drives into the DiskStation, there is a CD with the operating system on as well as the systems full user manual for reference. Also included is a CAT5e patch lead and a UK clover leaf power cable and inverter giving the DiskStation a DC power connection and two sets of screws – one set to secure the drives in place and the other set of three screws to hold the cover of the unit in place once the disks are installed as we will see on the next page. 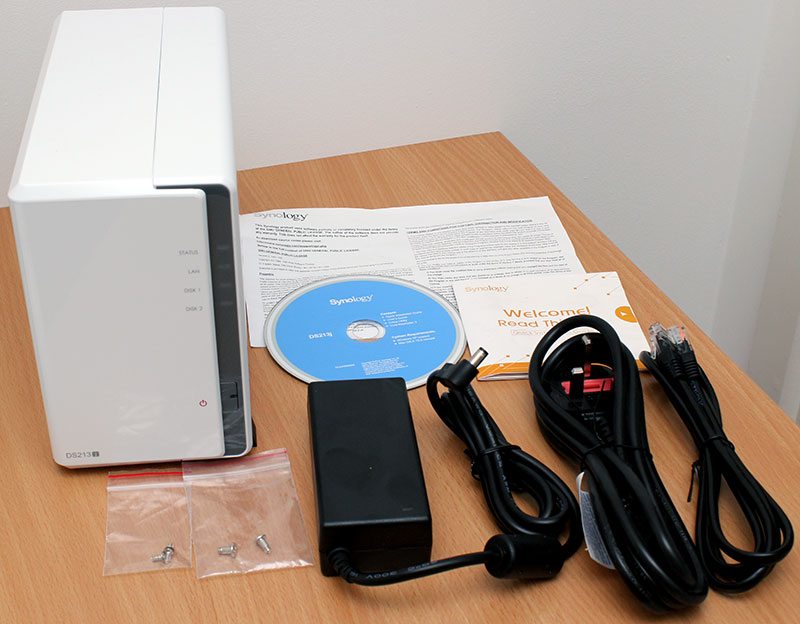