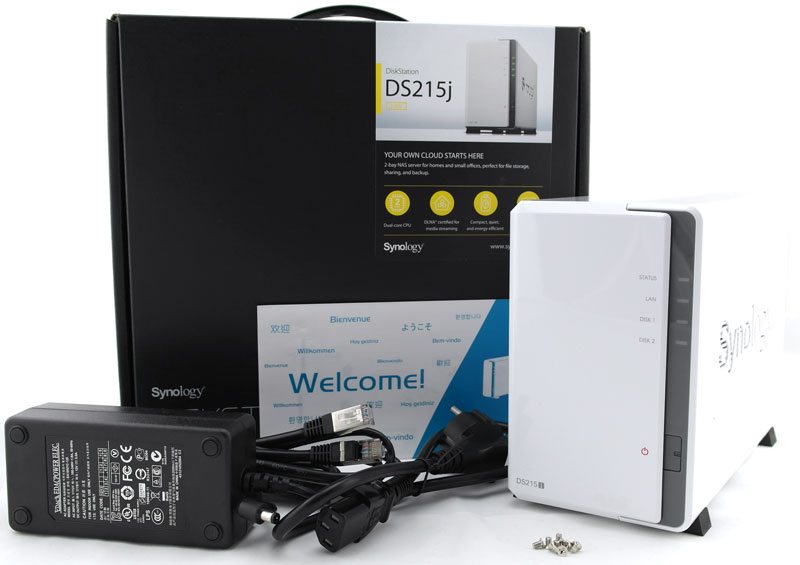 It isn’t long since I had the pleasure to review the new Synology 1-bay NAS for home users, so I’m really looking forward to giving the 2-bay version a spin in form of the brand new Synology DS215j.

The J series, or Junior as I tend to call them, is aimed at average home-user. But since there really isn’t such a thing as an average home-user, Synology has created a cost-effective NAS that still covers all the important aspects, features, and functions. This might very well be the a perfect entry device into the world of NAS. 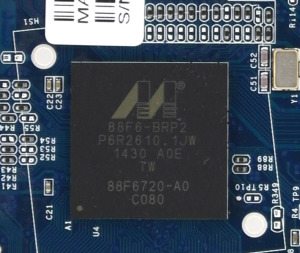 The DS215j is built around a powerful dual-core Marvell Armada 375 (88F6720) processor with floating point unit and hardware encryption. These are already some impressive features and will help to accelerate media decoding as well as encrypting your sensitive data. It has 512MB DDR3 memory to run everything and that might not sound like much. It should however be enough for you to run your download manager, stream media to your TV and/or computers and backup your files on a regular basis with enough to spare for additional plugins of your choice. 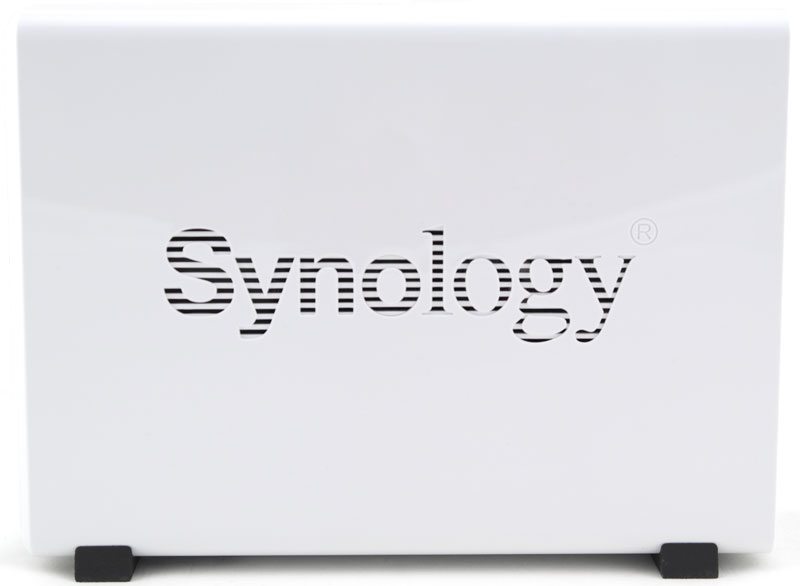 This small 2-bay NAS doesn’t offer a hot-swap feature or an easy tool-less mounting of your drives. But both aren’t really needed in our normal home environment as we don’t run around and replace our hard drives on a regular basis nor does it matter if we have a downtime of 20 minutes while we replacing a drive. It still only takes 2 screws to open the enclosure and another 4 per drive, so it isn’t a big task no matter what. 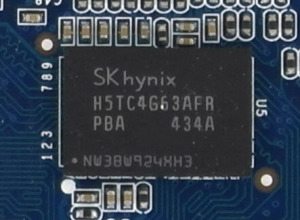 The DS215j takes two 3.5-inch drives as it is, but it does require adapters to work with 2.5-inch drives. This is simple due to the method of floating drive mounts and not a big issue. When it comes down to it, 99% of everyone will use 3.5-inch drives in an NAS like this anyway. If you want that extra bit of speed, the DS215j, of course, also supports the use of solid state drives. 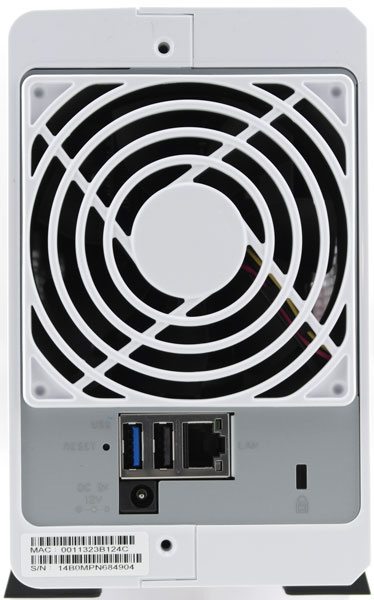 There will come the time where you’ll want to attach other devices to your NAS. This could be storage devices to backup files in one direction or the other, it could be your printers, and it could be your security IP cameras. The Synology NAS lineup can  also act as print-server and surveillance station. Every Synology NAS comes with a 2-camera license, making it ready to go. 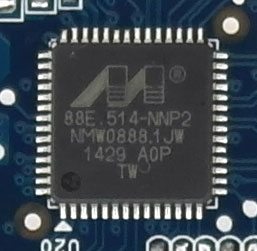 The DS215j has one USB 2.0 port for the printers and other devices that don’t need the high-speeds that the USB 3.0 port can give. The USB 3.0 is also present for those who have blazing fast external SSDs and thumb-drives and wish to connect them to their local network via the Gigabit interface of the DS215j. 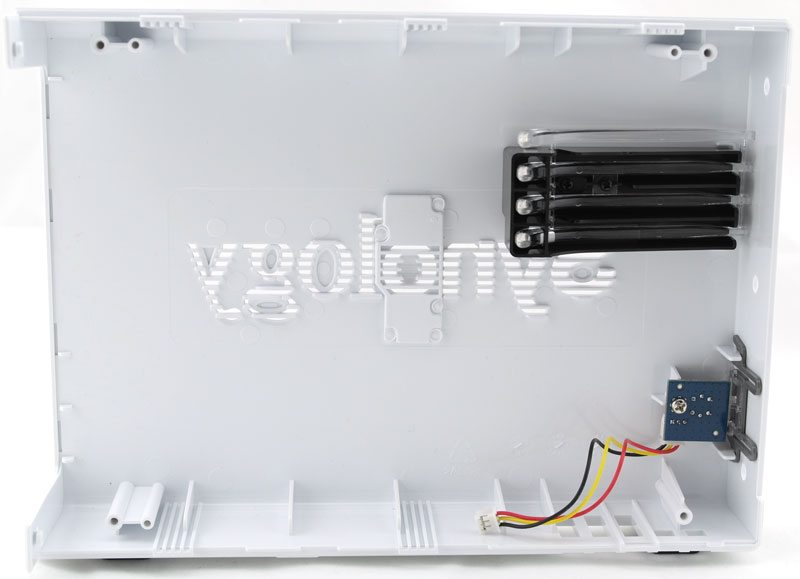 The upgrade Synology gave the 2-bay junior series is impressive and it is said to achieve speeds 19% higher than its predecessor. With measured speeds of over 111MB/s while reading and 87MB/s while writing it performs just as well as many SMB units. And it does that at a low power consumption of just 13.42 watts during access and 5.28 watts during hard disk hibernation.

Once you have all your media files stored in a centralized area, you’ll want to be able to access them in the most convenient way possible. Synology offers a wide variety of options and it has a DLNA media server built-in that can stream directly to your TV or other DLNA capable devices as well as specialized streaming to Samsung TV, Apple TV, Chromecast and Roku. 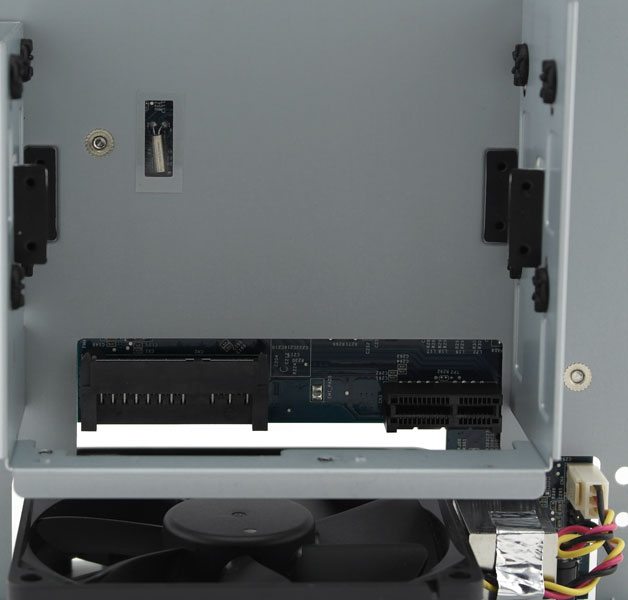 Synology also created the QuickConnect that allows you to easily connect it with the internet without having to configure your local network and router for it, nor any need to set up dynamic DNS addresses or similar. This will allow you to easily access your files from any device anywhere while still keeping all your files secure. 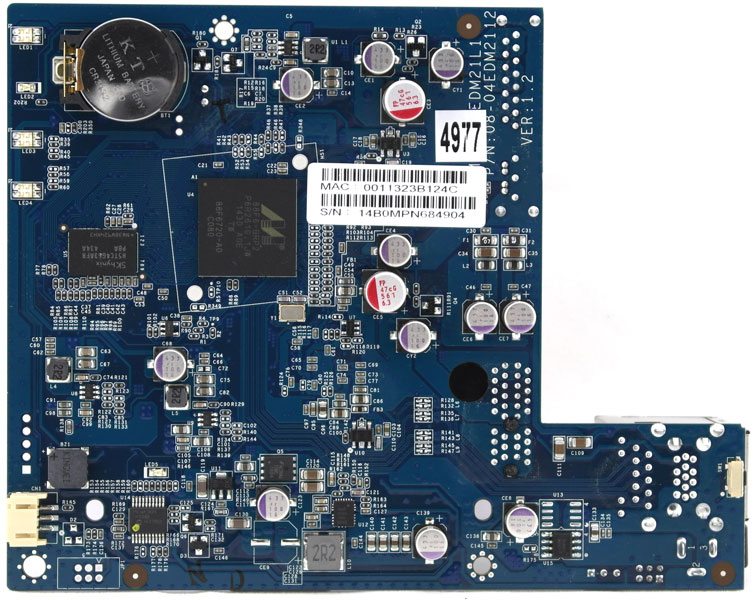 The QuickConnect also helps with the comprehensive cloud services Synology offer. You can easily create your own personal cloud using this NAS and save yourself the trouble, costs, and privacy concerns with commercial cloud services. The Cloud Station lets you synchronize files among your DiskStations and multiple devices including Windows, Mac, and Linux PCs as well as iOS, Android, and Windows mobile devices. You can also sync files between multiple Synology DiskStations as well as Google Drive, Dropbox, and Baidu for hybrid cloud storage.