Thecus released two new NAS devices that are similar to some of them we’ve seen previously, but at a more price-sensitive point that smaller businesses will appreciate. The two new elite class businesses NAS from Thecus are the N7770 and the N8880U that are very similar to the N7770-10G and N8880U-10G that we’ve previously seen, just without the added 10Gbps NIC. That allows the units to be cheaper for the people that don’t need 10Gbps ethernet, but the two units both have the upgrade option should you want that option later on.

Both these units are built around an Intel Core-i3 2120 dual-core processor with a clock speed of 3.3GHz and aided by 8GB DDR3 ECC memory which can be upgraded to 32GB should you want to. Naturally, these two NAS are compatible with the latest high-capacity hard disk drives and thereby allow for 70TB and 80TB raw storage respectively. NAS stacking is also made easy through iSCSI target volumes, allowing for a streamlined grows with your business. The built-in 1 Gbps Ethernet ports allow for all 7 modes of link aggregation and as mentioned earlier, you can upgrade with 10Gbps PCIe add-in cards too.

Besides the LAN connectors, you also get six USB 2.0 ports, two USB 3.0 ports, and an HDMI port for direct monitor attachment and use of LocalDisplay. The N7770 features a 300W power supply and supports RAID 0/1/5/6/50/JBOD while the N8880U also supports RAID60 on top of that and has a 400W redundant PSU setup. 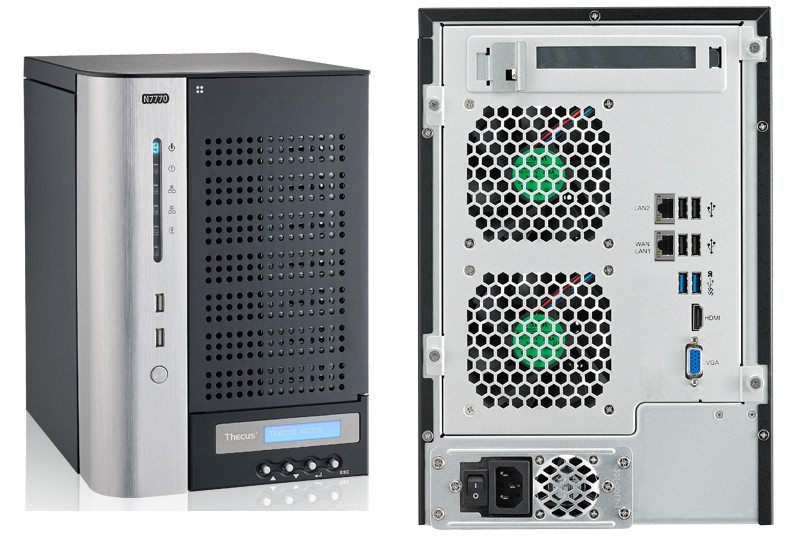 Both these NAS are available now, so check you local Thecus dealership should any of them interest you.