Placing the N4560’s extras aside and looking at the system itself, things look somewhat standard with an all black design with a LCD display and controls found at the bottom of the faceplate. Above the display is a typical four bay stack of drives to which remains the systems status LEDs and easy access USB port for connecting flash drives and any other external storage devices. 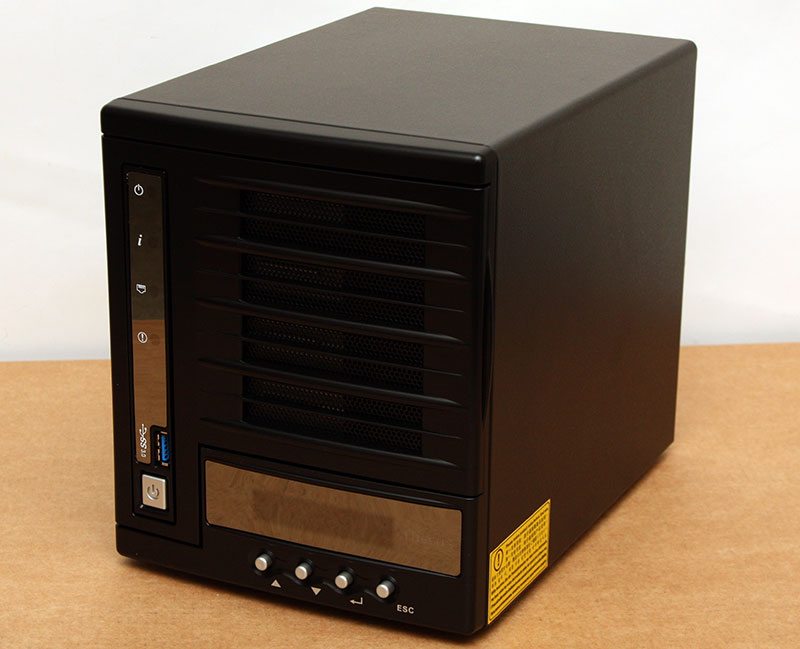 As mentioned above, Thecus have left the status LEDs on the left hand side of the system – as commonly seen on a number of Thecus desktop solutions and along side the obligatory power and network status lights we find a further two LEDs for notification of system failure and self diagnostic mode status. 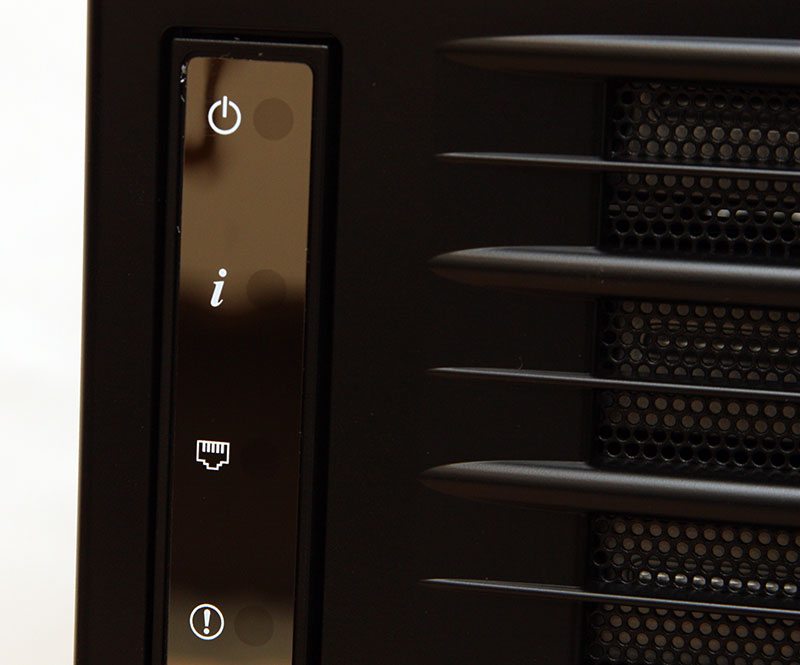 In the bottom left hand corner we are greeted by a high-speed USB3.0 port for speedy data transfer to / from external storage devices and below this is a power button – I’m sure you can work out what this button is for. 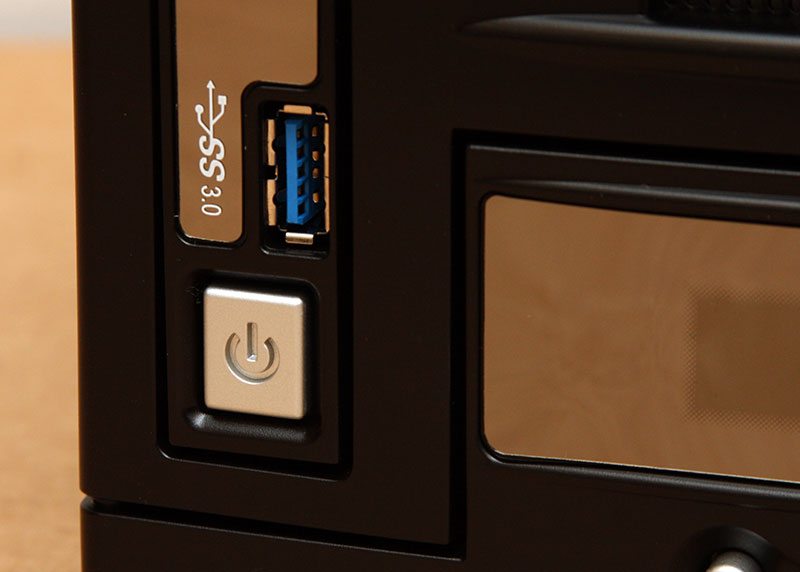 Whilst the LCD display looks a little similar to that found on the N5550, there are few key design points that set it apart. The first of these difference lays with the ‘window’ that the LCD screen is visible through. Whilst the 5550 has a black toned cover, the N4560 has a mirror-like finish to it simply to add a little bit of contrast to the otherwise black design. Below the display is a like of four buttons for navigating through the on-screen menus. 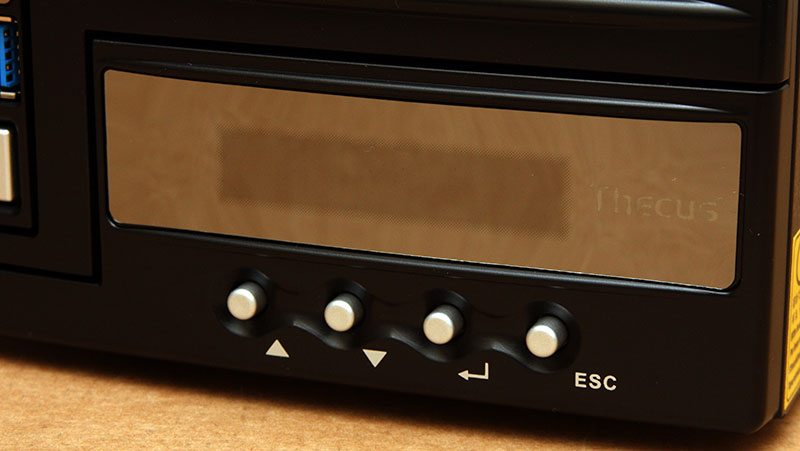 Opening up the door we can see that the drive bays are laid out in a horizontal orientation and there is more that enough ventilation space available to keep the lockable drives nice a cool during use. 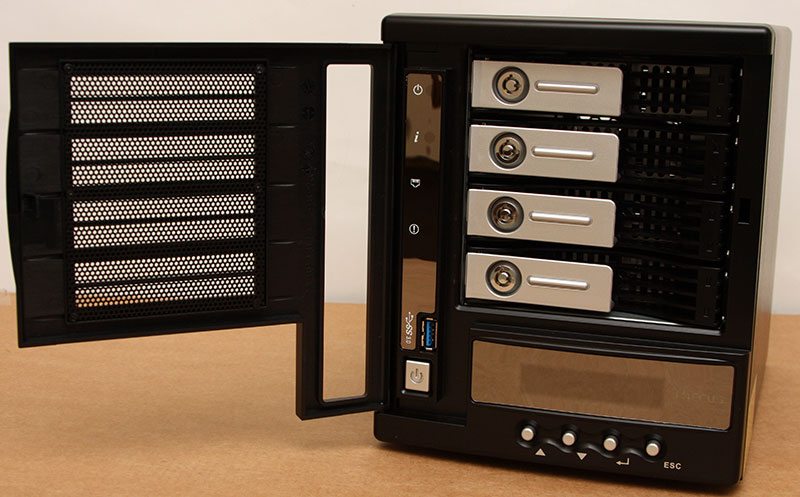 Part of the key to keeping a budget systems cost down is to use components from other models, thus having a metal framed tray with a lockable front latch, whilst a thin layer of foam in the base of the tray aids in keeping resonant noise from the drives as low as possible during operation. 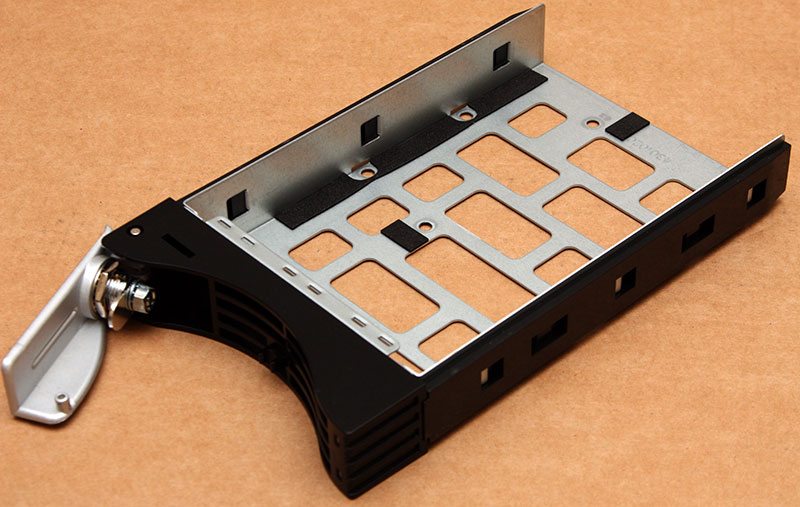 Closing the front door and moving round to the rear of the unit, Thecus have not wasted any time in laying on a plethora of connectivity options that in most SOHO instances simply go to waste. Keeping only the bare essentials in place, we do get a pair of USB2.0 ports, a single Gigabit Ethernet port, HDMI output for media playback functions directly on the system and a S/PDIF audio output for hooking up a home cinema system. Taking up a majority of the remaining space is a single 80mm low-noise fan, allowing the system to run at a very low acoustic level, just what the SOHO user is after in any system. 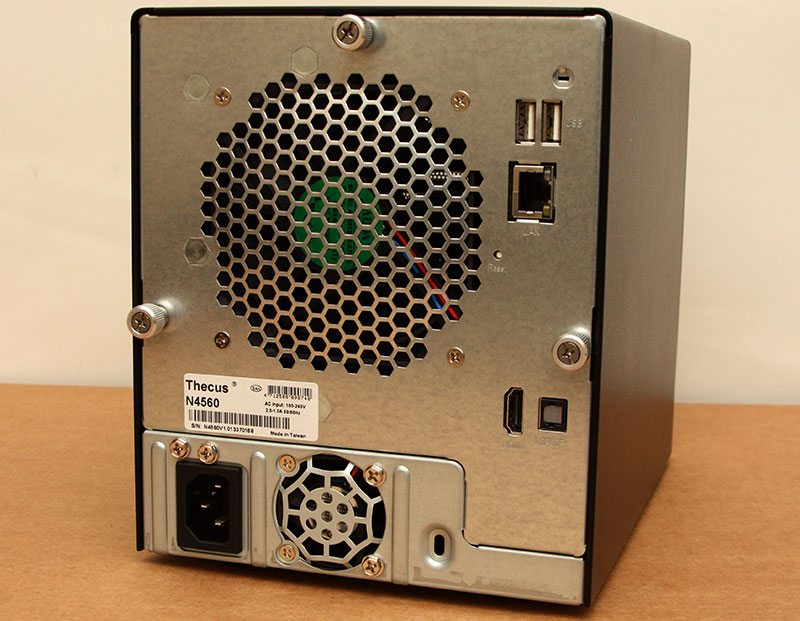 With everything on the outside of the N4560 taken care of, it’s time to lift off the cover and take a closer look at what makes this system tick. Before I do get too involved however I will make the same note that I do on any NAS in that open up your system in the same manner as I do from here on, WILL VOID YOUR WARRANTY. I take apart the system so that you don’t have to.

Removing the metal side & top panel followed by unhooking the front cover we can see that Thecus have given this system a nice sturdy frame, giving it the strength it needs whilst keeping the amount of empty space to a minimum. 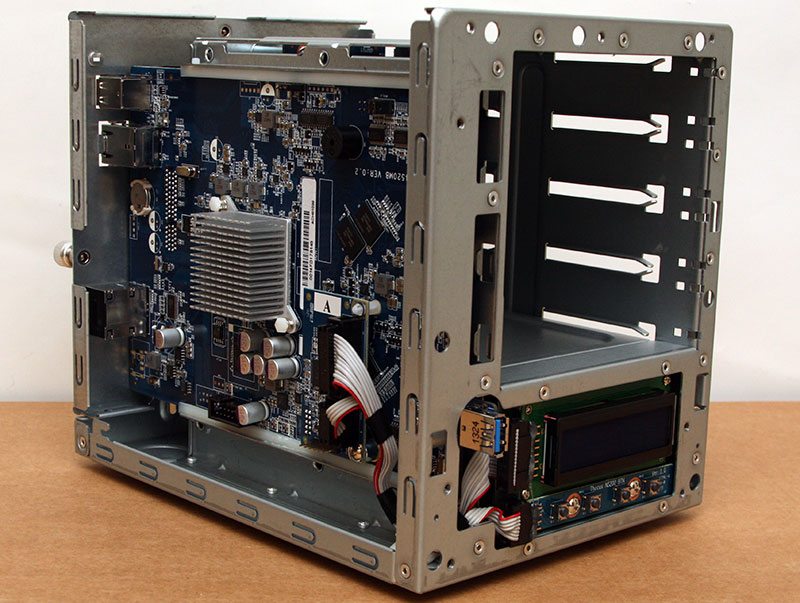 Going back to my note about using components from other systems, we can clearly see that the PCB for the OSD controls has been lifted from the N5200 whilst the LCD panel appears to be from a different system such as the N5550 with its white text and blue back light. 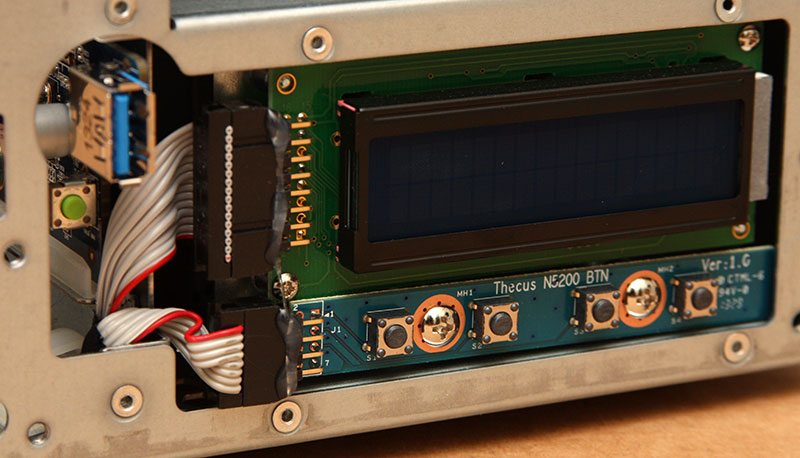 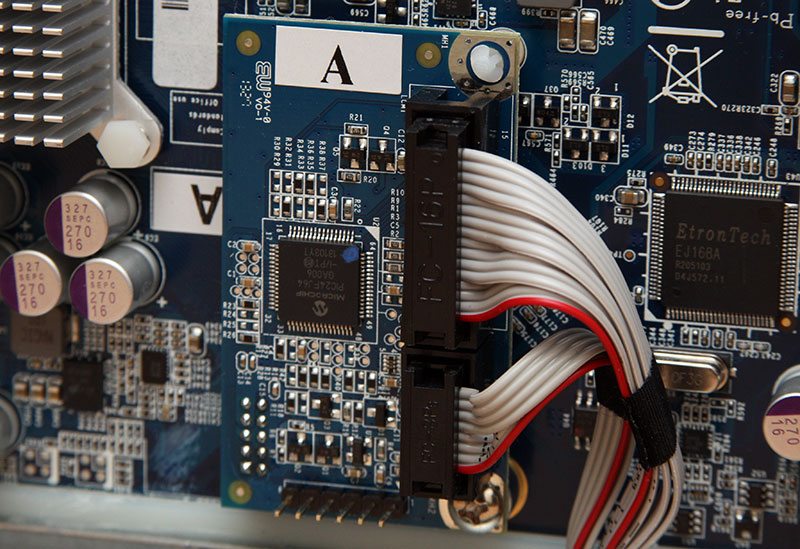 Looking a little closer at the core component of this smaller board, we find a Microchip PIC24FJ6 display controller. 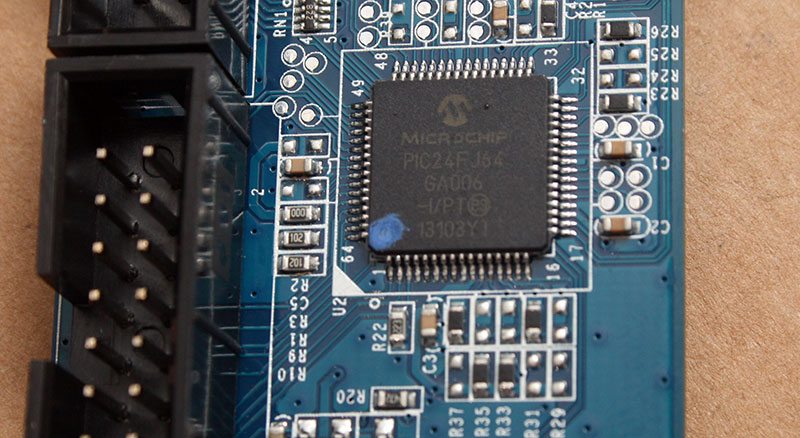 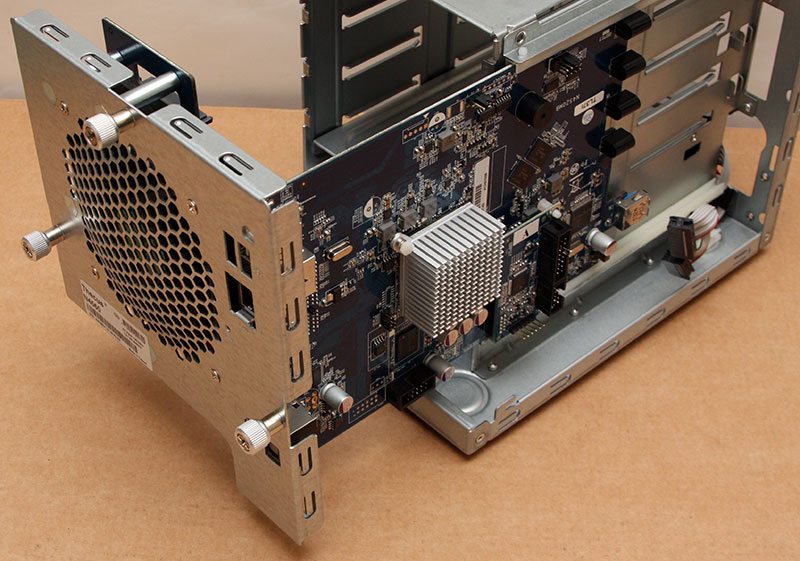 Tucked in the bottom of the chassis we find a compact 150W PSU with a single 4-pin connector to supply the motherboard with its power. With this system having a lower power design there is no need to have a massively over-specified supply – 150W will give this system more than it will ever need. 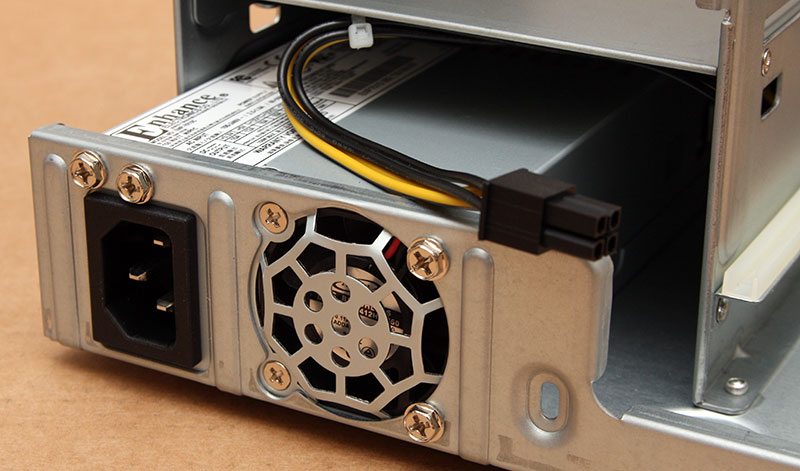 With the motherboard removed entirely from the rest of the system we see that the SATA daughter board is attached to the back panel, with an 80mm fan set in-between to keep the system cool during operation. 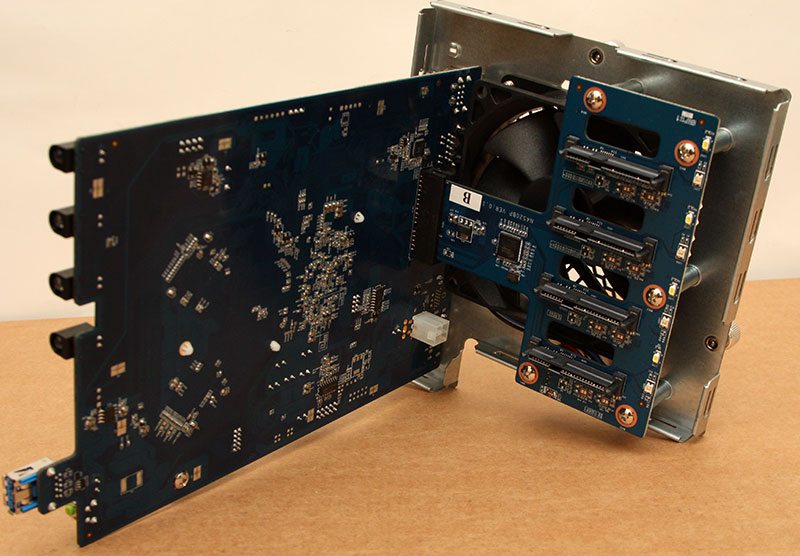 Between the SATA headers the PCIe connector lies a Silicon Image Sil3132 SATA host and RAID controller, giving the system SATA II, 3.0Gb/s support. As we also see, this daughter-board is pulled from another system, namely the N4520 which has a slightly lower clocks speed for a slightly cheaper solution.

Looking at the motherboard a little more closely, virtually all the major components has been fitted to on side of the PCB with the Atom based SoC positioned in the middle of everything. The SoC has a passive heatsink sat on top of it, with the single fan at the back of the chassis drawing enough air through the chassis to provide adequate cooling. 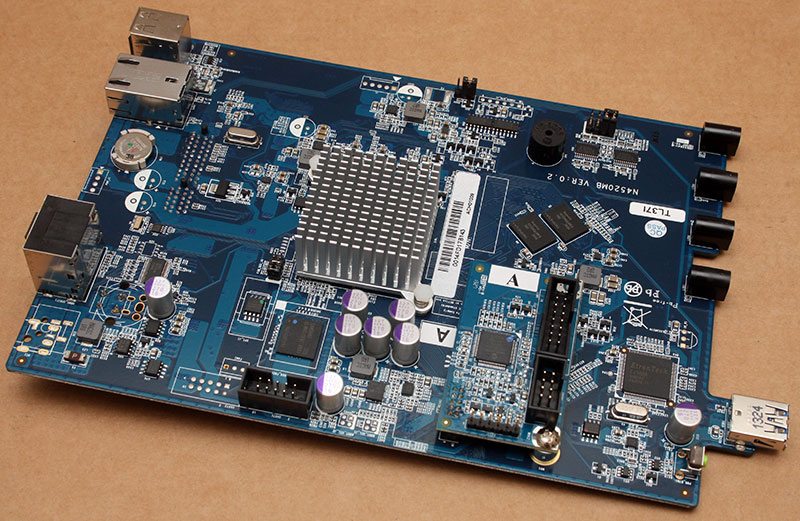 Whilst the majority of the components are set on to one side of the PCB, the power header and PCIe lane is fitted to the underside with only a few tiny resistors and other minor components surrounding them.

On the front edge of the motherboard we have a row of four LEDs which as seen above illuminate through the front panel to highlight the systems status etc, beside which is the systems only USB3.0 port and power button to the far left.

There is no surprise in seeing one of EtronTech’s ships somewhere on the board and the EJ168A USB3.0 host controller that we see once again on the N4560 is a very popular option among a number of NAS vendors. 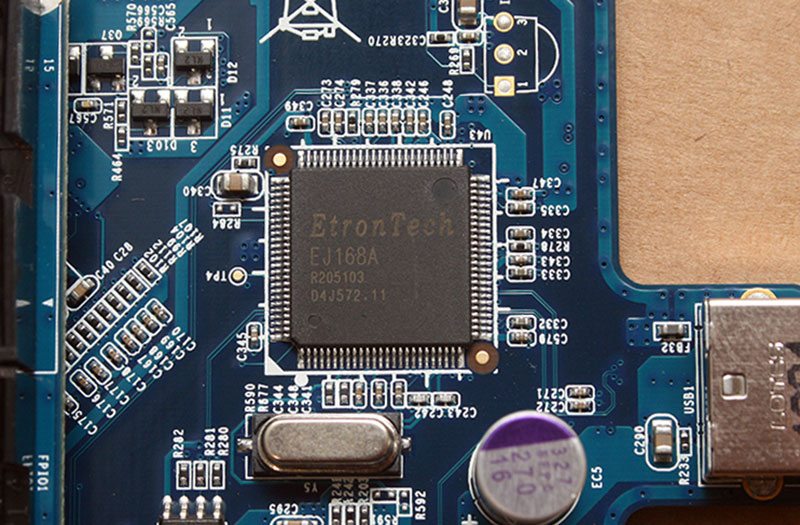 Lifting the passive heatsink off of the SoC we can see the compact chip that is soldered directly to the motherboard. With a core clock speed of 1.6GHz, the dual core CE5335 Intel Atom driven chip is the same as that seen on the N2560 that I took a look at a few months ago, so we already know that there is a good amount of performance on offer given its size and speed. 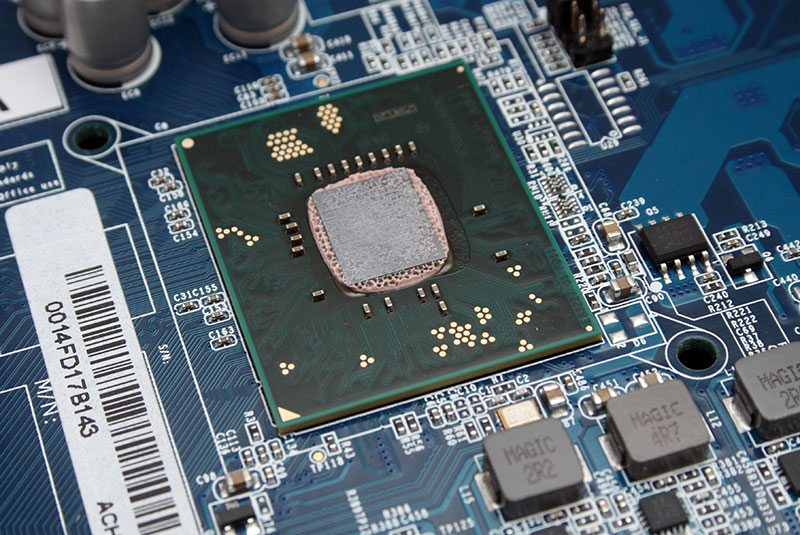 Accompanying the SoC we find 2GB of DDR3 memory from Hynix positioned to one side of the board and like many other SOHO grade systems, the amount of RAM on offer is of a fixed amount and is made up of four 1600MHz packages which keep the overall cost of manufacturing down whilst keeping the performance up. 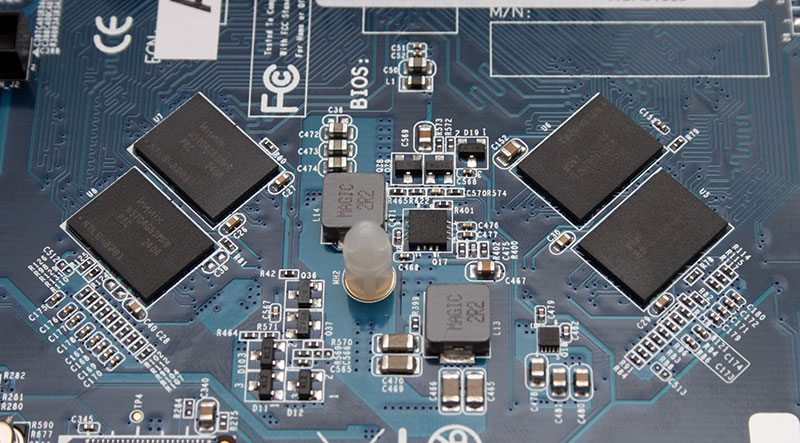 Elsewhere around the motherboard there is one final chip of interest, this time from Samsung. The KLM4G1YE4C-B001 4GB NAND flash package that we find here plays host to the systems operating system and firmware, and is one of three different options that I’ve seen vendors opt for when designing their systems. (The other options include a SATA DOM, or installing the OS onto the installed hard drives) 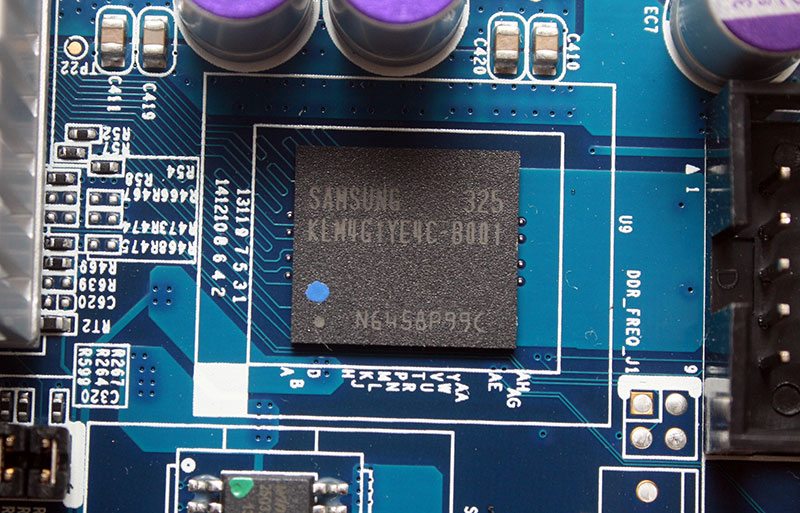 Finally, on the back of the motherboard the N4560 has a simple and to the point line of connectivity options as highlighted previously, with the USB and HDMI outputs controlled directly from the SoC and the Gigabit LAN taken care of by a Realtek controller. 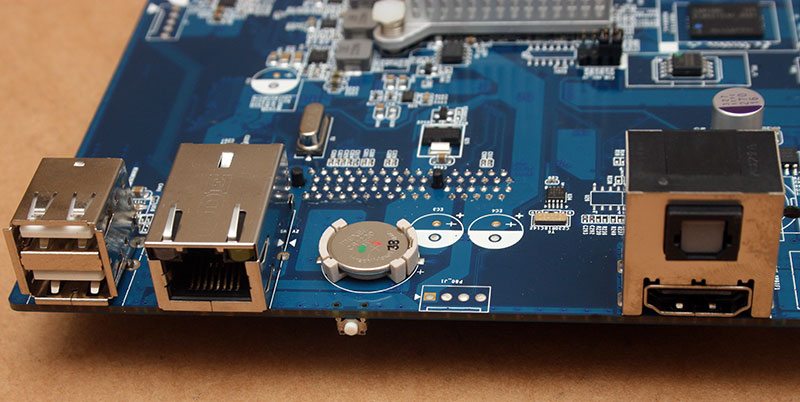