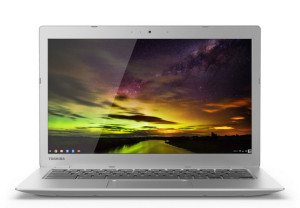 Still on the fence about picking up a Chromebook? Toshiba today announced that it’s refreshing its Chromebook lineup for 2014. Starting at $250 -the new “Chromebook 2” model will feature a 1080p display, 16GB of speedy flash storage, 4GB of RAM and HDMI out port. To assist with the minimal storage – owners also receive 100GB worth of cloud storage through Google Drive to help backup documents, photos and media.

Toshiba’s opted for a Intel Celeron N2840 clocked at 2.16GHz – which should see the Chromebook reaching around nine hours of usage. It’s more than adequate mileage for usage at the office or on the go. We’ve already seen Google build and expand their set of cloud applications with rich features and impressive collaboration offerings – the question will all come down to how much the minimal flash storage will impact your workflow.