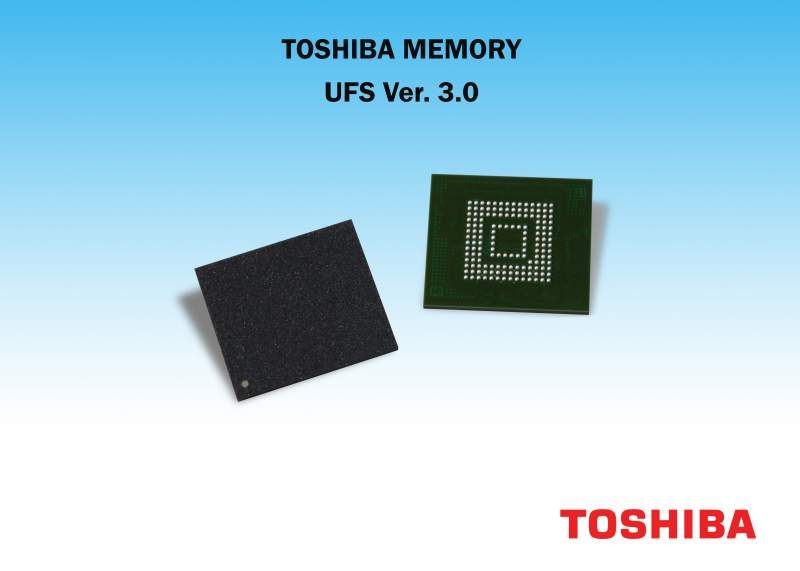 Toshiba Memory is announcing that they are the first to begin sampling Universal Flash Storage (UFS) 3.0 embedded memory devices. The new lineup utilizes the company’s 96-layer BiCS FLASH 3D memory. Integrated with a controller in a JEDEC-standard 11.5 x 13mm package. Furthermore, it is available in three capacities: 128 gigabytes, 256GB and 512GB.

With high-speed read/write performance and low power consumption, the new devices are ideal for applications such as mobile devices, and AR or VR systems.

What Kind of Performance Can Users Expect?

In terms of numbers, these are compliant with JEDEC UFS Ver. 3.0, including HS-GEAR4. Which means these have a theoretical interface speed of up to 11.6 Gigabits per second per lane (x2 lanes = 23.2Gbps).

According to Toshiba, sequential read and write performance of the 512GB device is approximately 70 to 80 percent faster than generation devices (THGAF8T1T83BAIR).

When Will Toshiba Start Shipping These Out?

Only the 128GB version is actually shipping now. Meanwhile, the 256GB and 512GB capacities will gradually roll out until after March.

“As the first company to introduce UFS samples back in early 2013, Toshiba Memory Corporation’s introduction of UFS Ver. 3.0 embedded flash memory devices is further proof that we continue to be at the forefront of storage for next-gen mobile devices,” noted Scott Beekman, director of managed flash memory products for Toshiba Memory America, Inc. “Moving forward, we will continue to drive these advances, maintaining our UFS memory leadership role.”